Sitrep
Background to this game is in the previous post here: LINK 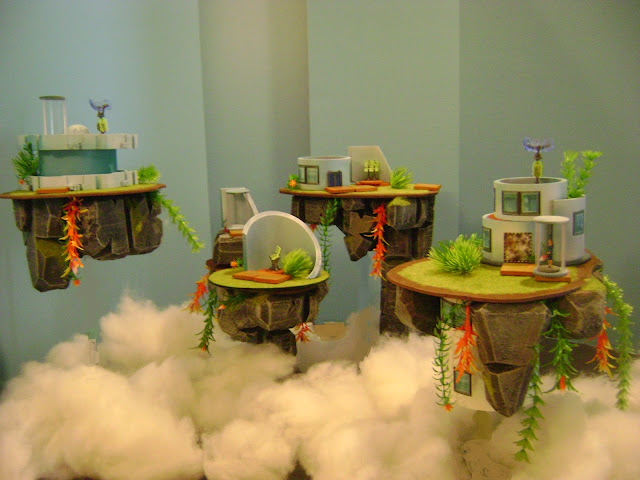 The Battle
A small team from 8 Ball Command of Maj. Guiscard, Sub-Ambassador Tigh, and Specialist Bont land on the westernmost island of the Mondly Research Institute. Bont immediately accesses the nearby Telemetry Sensor and downloads the test data. 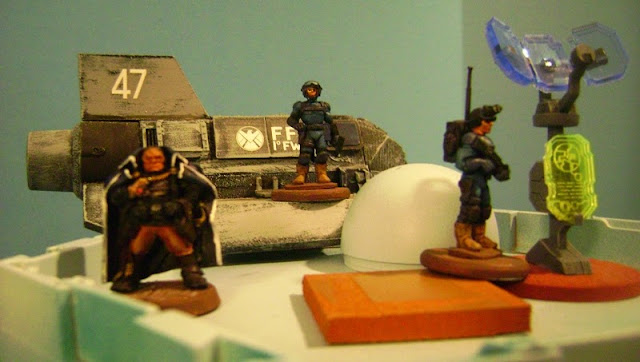 Guiscard spots the Researcher (Dr. Woiler) and her bodyguard on the east island and takes a peoplepod over. 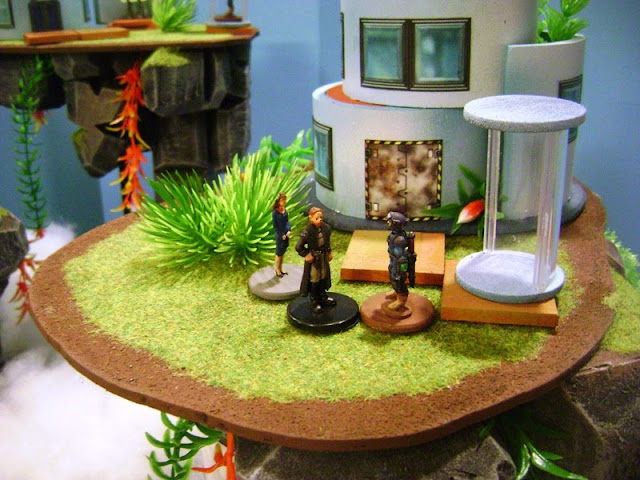 However, Baroness Niehoff and the Nazis observe the activity from the next island. 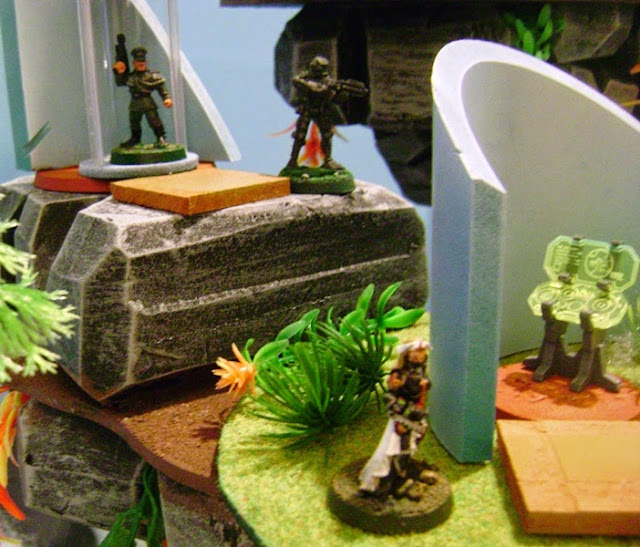 They have been waiting to see if there was a security team was waiting in ambush, and since the new arrivals haven't tripped any alarms, they spring into action.

The Autom plugs into the terminal and enters the datanet. The file appears as an ancient tome within an energy field. (Okay, I KNOW. You are judgementally thinking, "Computer interfaces with Computer, why would there be any cyberpunk imagery?"  Shut up. It was supposed to be people, and it would have looked cool... ...moving on...) 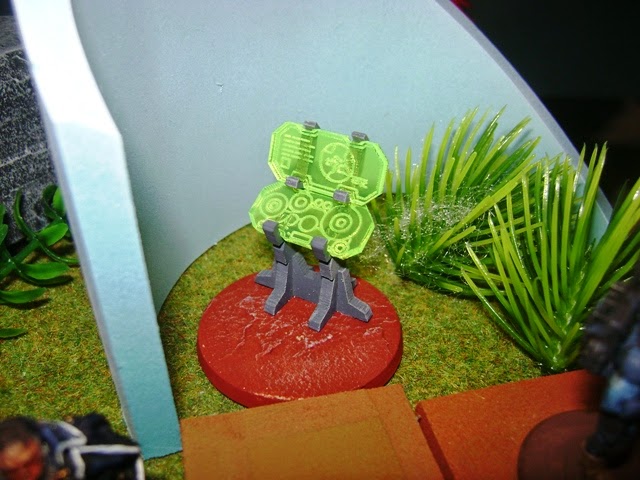 And the Baroness sneaks unseen over to the west island... 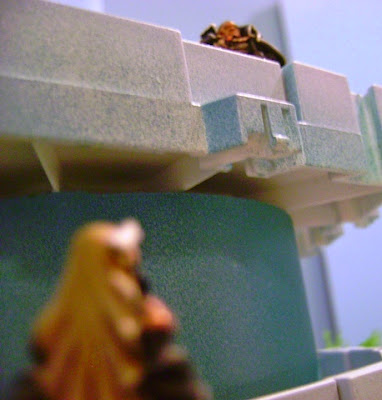 Guiscard is successful in convincing the Researcher to help them.  As it turns out, she already had serious misgivings about the new artifacts and the mysterious benefactors that brought them.
However, the game is afoot, and spotting the Baroness just before it's too late, the Major warns Sub-Ambassador Tigh. 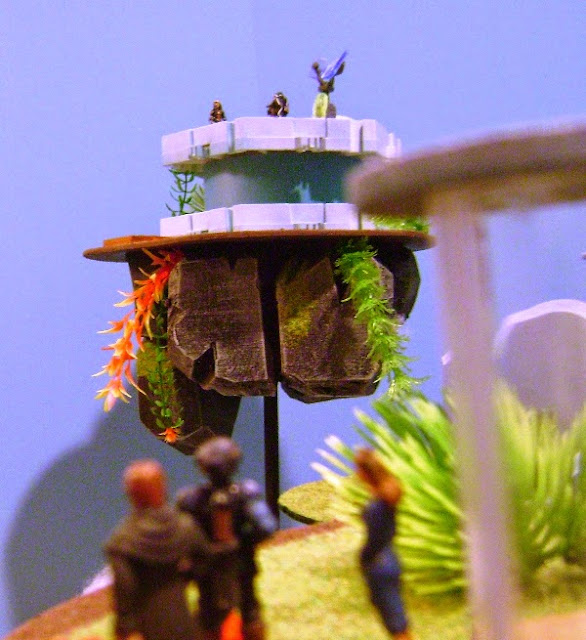 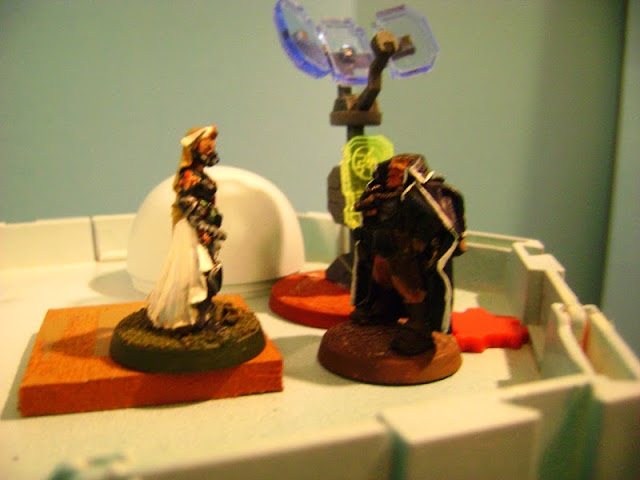 Bont (getting out of the way of wrestlemainia) moves over to the middle to try for the second terminal, and ends up delayed by having to explain himself to Patrolman Jones 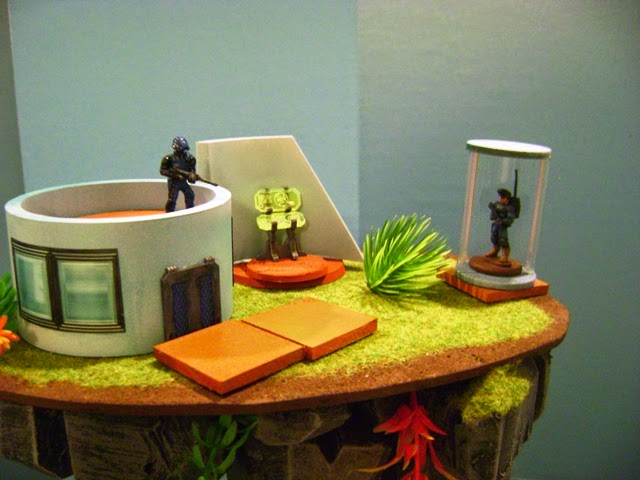 ... so the Nazi Autom proceeds unopposed to the file, and extracts it on the first try. 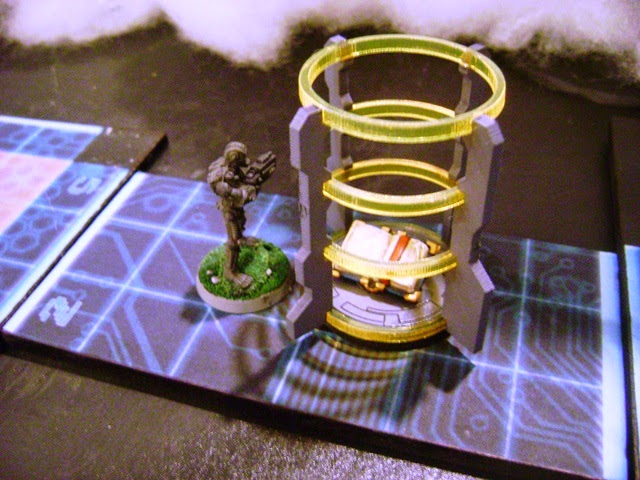 The Baroness drives Tigh off the edge of the building, and the Nazi officer opens fire! 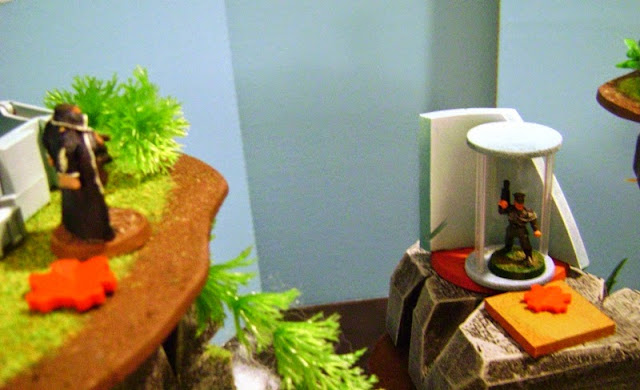 Tigh is bleeding, but not out...
In the chaos, the Baroness orders the Nazi Autom back to the safehouse with the file. 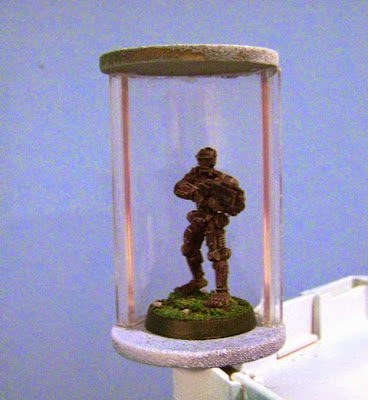 Guiscard takes shelter on the roof of the lab and exchanges fire with the Baroness and the Nazi Officer. None of the combatants suffer any serious wounds, but it does take some of the pressure off of Tigh. 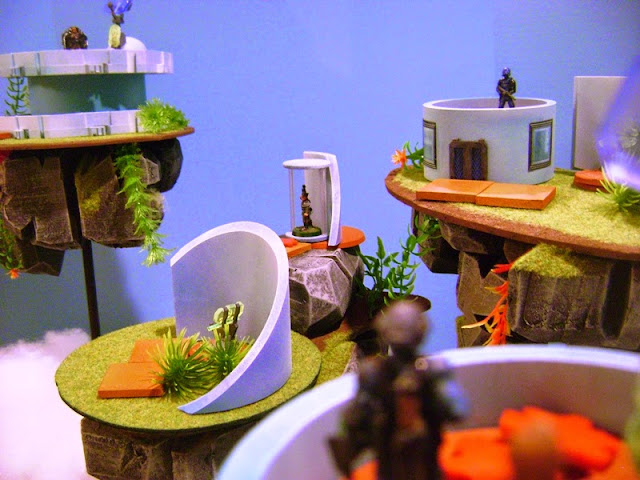 Officer Jones has been on the radio for backup and a SWAT team is on the way.  Both sides decide it's time to quit the field and withdraw.

The Nazi agents got the main file, but 8 Ball came away with some experimental telemetry data and the Researcher.

Soon 8 Ball Command and their new allies are aboard the KCS Helena going over all the facts and trying to piece them together. The Dr. Woiler explains that in addition to the anti-grav technology, they were given an object of unknown purpose, and told to simply "investigate".  The object was ancient, and emitted a low frequency energy. What does it all mean?

Epilogue (2 days later)
The Comms station on the KCS Helena comes alive. The Passereaux has jumped into the Toolenay system with Inquisitor Verhoeven and Agent Sophie onboard. Coming on at full thrust, their initial message is dire, their adventures on Krellborne IX (chronicled here: LINK) have exposed a danger that is bigger than anyone has suspected.
"It's worse than you think. Be ready for anything.
Inquisitor Verhoeven and KCS Passereaux Out"

I would like to extend a very big WELCOME to our new followers:
Mattias Darrow
daveb
Ady Arnold

As Always, Thanks for Looking!
Will