Background
A vast conspiracy is reaching completion on the Floating Cities of Toolenay. After tens of thousands of years, the Ancient Ones and their willing puppets have brought together the 3 Eternity Stones.  If they can complete their ritual with the stones, the disruption of time and space will re-awaken their entire race and rain death and destruction upon the galaxy.  Standing against them are a few plucky heroes. To follow this story from the beginning, go here: SECRET WAR I. 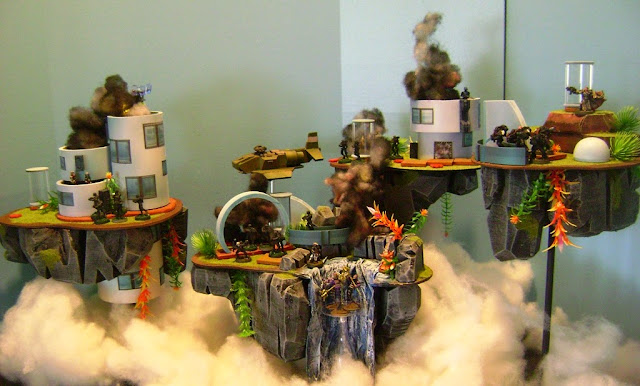 SITREP
Leaving Astropath O’Blivion  to monitor the Eternity Shrine for any action by the conspirators and Rosa (the gunslinger) to babysit him, the rest organize themselves for the coming battle. 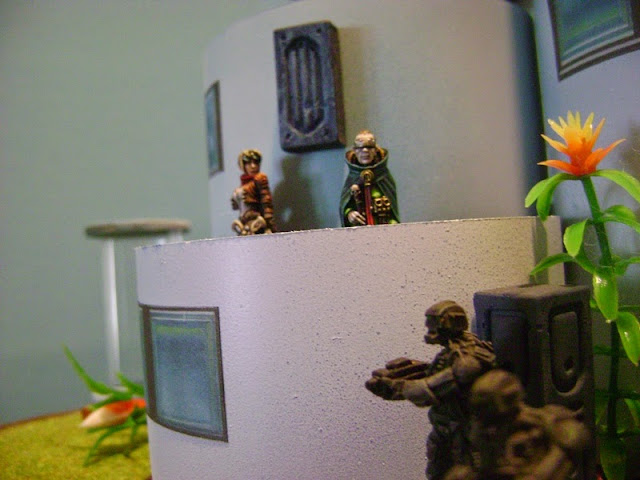 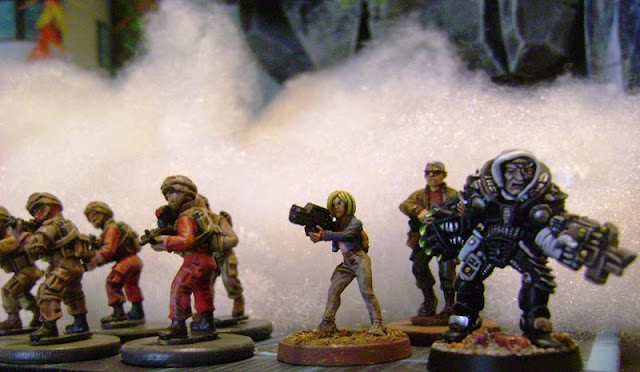 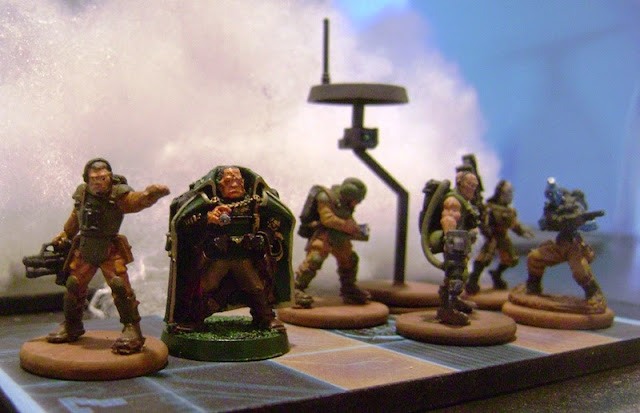 For the Ancient Ones and their co-conspirators, 3 Lordlings, Cannoness Quintilla, and Baroness Niehoff are participating in “The Ritual” 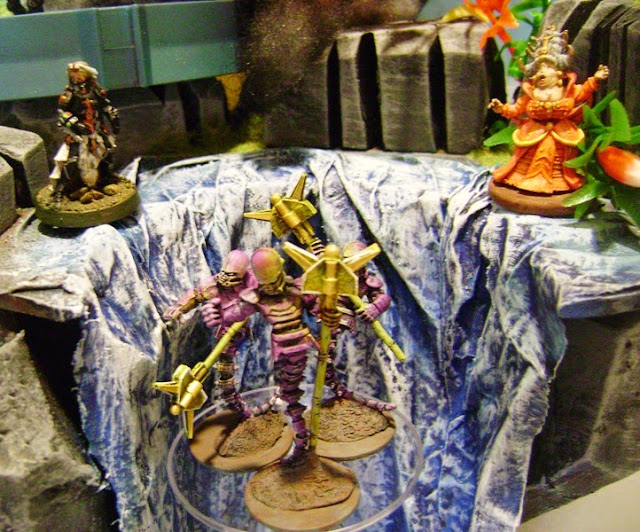 To protect the participants, Cannoness Quintilla has brought Radical Inquisitor Gesthemene and a Squad of Soldiers from the Church Militant. 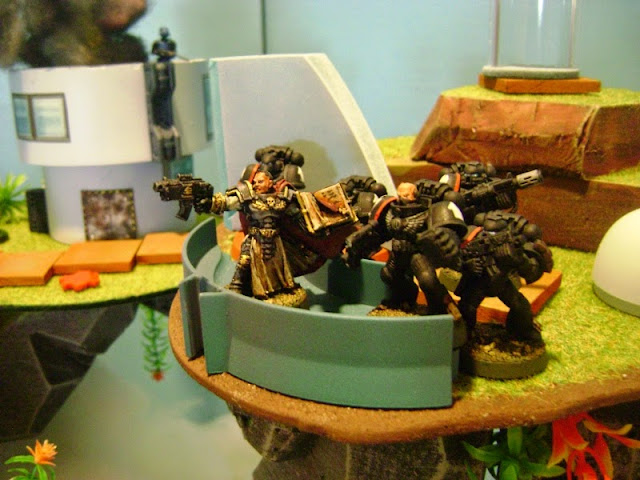 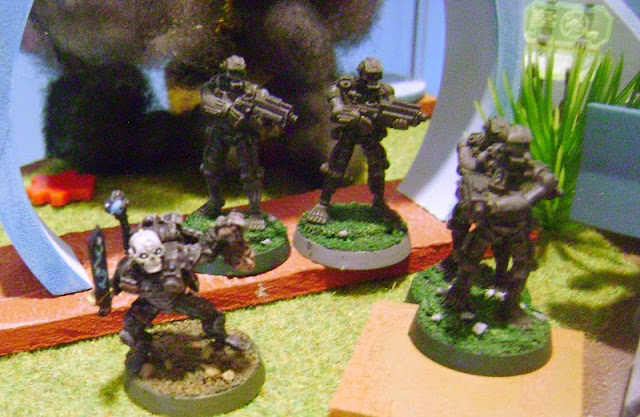 _________________________________________________________
Game Explanation
Skip this if you want to stay in the story.
I feel compelled by the unusual nature of this game to step out and explain its structure. First of all, I was reaching for a scenario that would be “different” and a complete counterpoint to my “Social Adventures” where there was no violence. (see "Party to Remember"). Another driver of the design was that I realized that since I wanted a certain big-picture outcome for the overall background and story of Sector Six, it made no sense to leave that outcome as an objective and thus to chance.

So I began to work with the concept that the setting was a huge battle and the game itself would take place as a small scale game inside of that. The best example I can think of to illustrate this idea resembles the Omaha Beach sequence of “Saving Private Ryan”.  As the carnage rages at Omaha, the movie itself squeezes down to a small group of characters and their objectives. So if I wanted to game that scene using Pulp Alley, I would treat the larger battle as the setting with large spaces of “extremely perilous terrain” or “impassible terrain” and the scenario itself would be the League Characters moving from one objective to the next (like the “Trail of Crumbs” scenario in the PA book).

I hope that explanation is clear enough, because the next step was taking that concept and implementing it to the specifics of this game.  The larger battle is not gamed, it is represented by a logical series of pre-programmed events that will cause the impassible, perilous (and extremely perilous) terrain to evolve each turn.  The Characters will have to deal with all of the chaos (and fight their enemies) as they try to achieve their objectives.

As the good guys arrive and the game opens, the bad guy minions (Automs, Assassin, Radical Inquisitor) are just finishing off the local cops/militia and the Ancient Ones (and the other bad guys) have begun their ritual. The Lordlings, Niehoff, and Quiltilla are not characters (they are too enraptured by the awakening ritual) they will be objectives.

Other objectives will be revealed based on events. 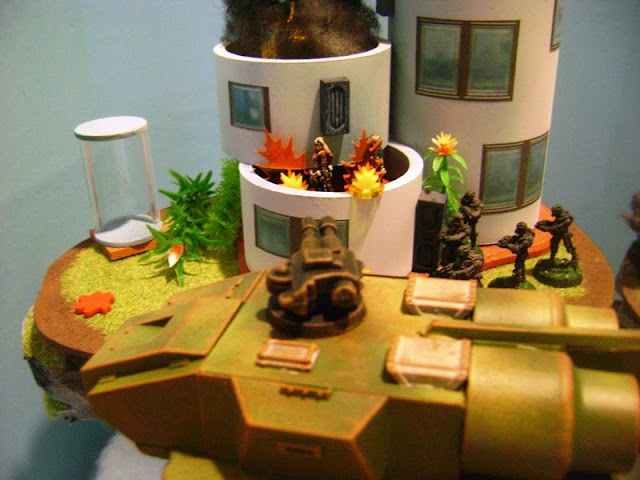 The allies on are a strict timetable.  The Astropath can sense the psychic energy rising as the Awakening Ritual progresses, and he communicates that there is not much time before its completion.

Inquisitor Verhoeven decides to land his team on the north island, and the Naval Security troopers lead the way into the teeth of the enemy. 3 casualties on each side. 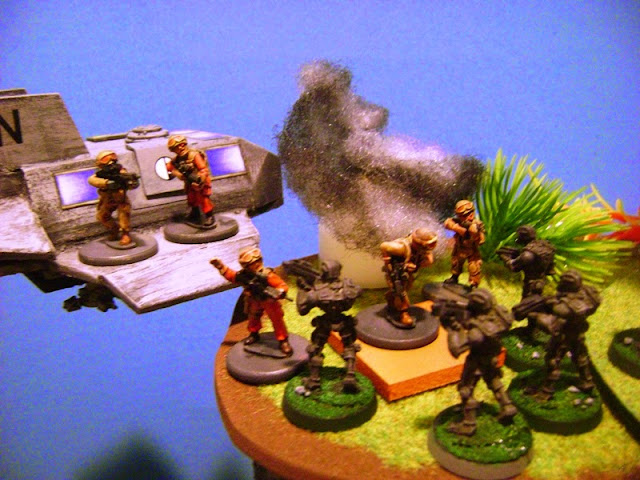 The Team led by Maj Guiscard drops the Eight Ball squad on the western island then sweeps around to the eastern island where the Major and Sub-Ambassador Tigh debark. 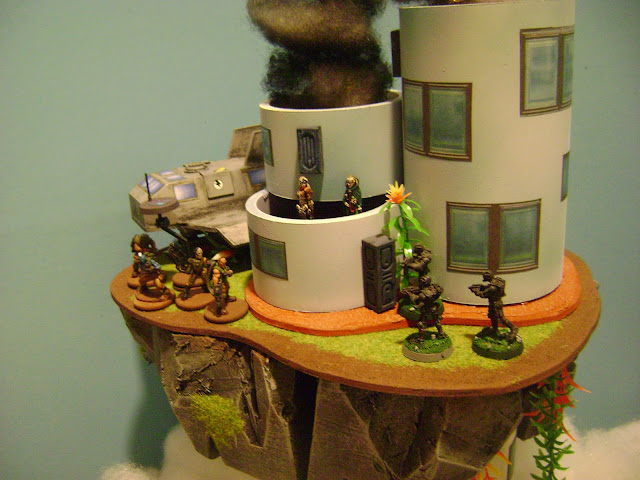 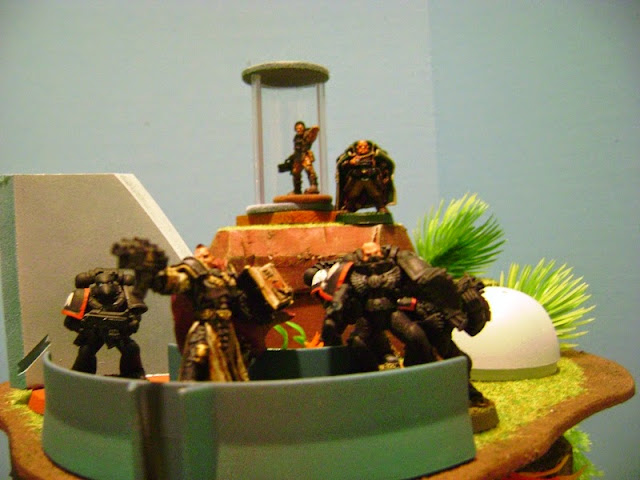 At this point the action seems to stalemate while the combatants cautiously trade shots, but time is running out. O'Blivion can sense the impending completion of the ritual. The allies are getting the better of the exchange, but their progress is way too slow. 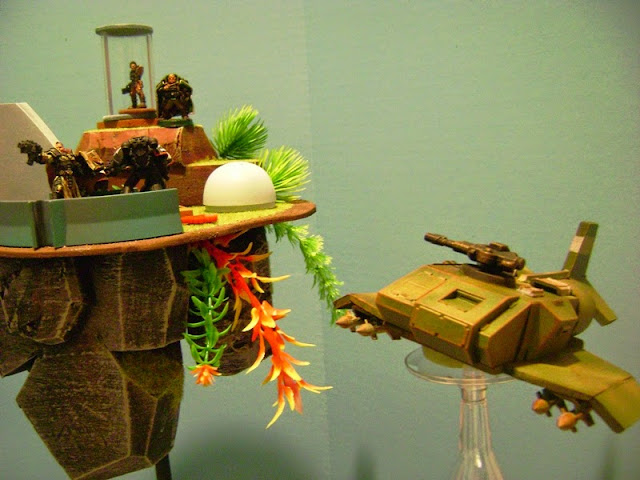 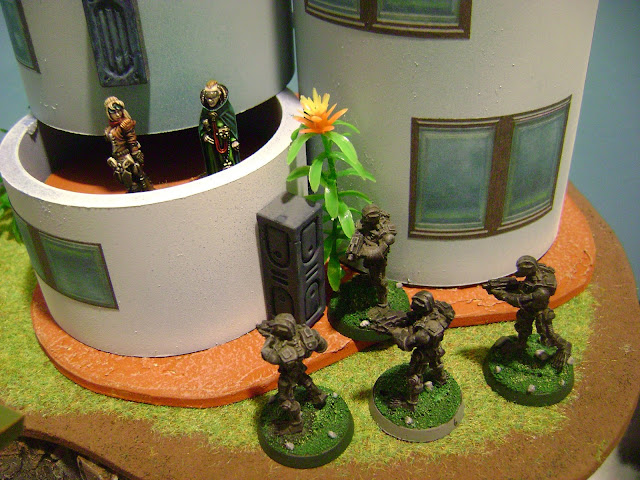 With a telepathic warning from O'Blivion, Verhoeven recognizes the urgency of the situation, He charges with a maniacal frenzy and he tears into the enemy… 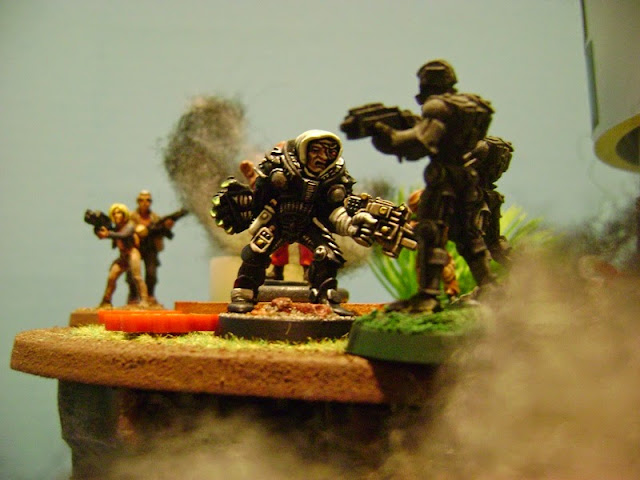 Guiscard radios the Helena - Admiral King, I think it is time for Plan B
Adm. King -Helmsman! Execute jump! 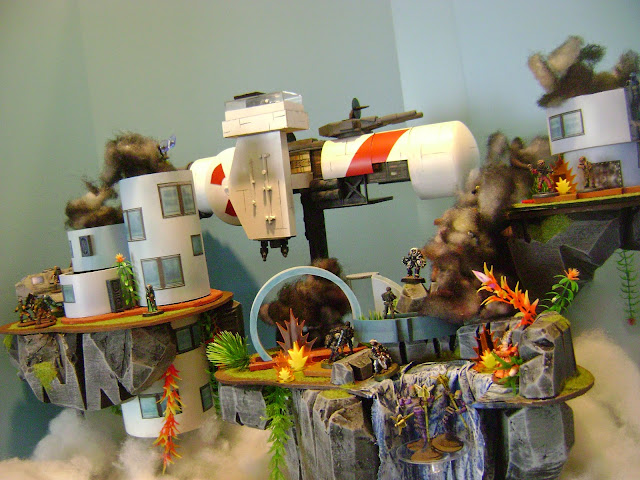 As the Helena is blasting targets at point blank range, Verhoeven seems unstoppable. 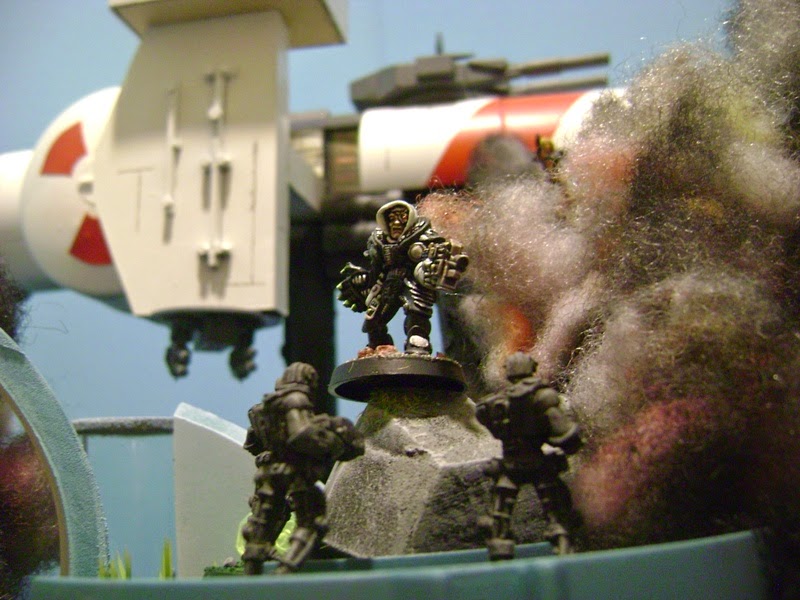 He disptaches the Reichs Assassin in a single exchange 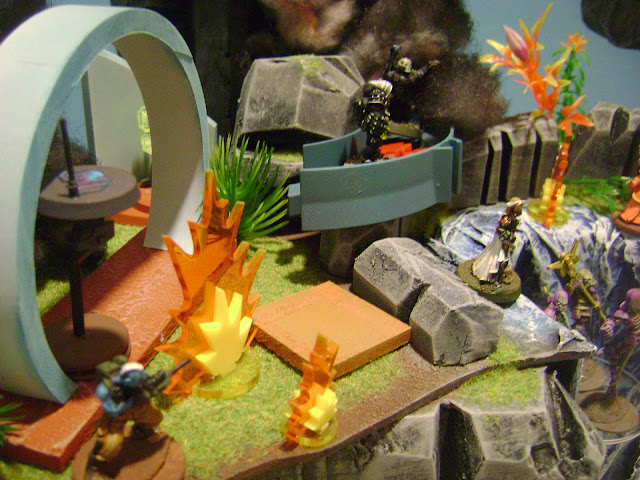 But just as the tide seems to be turning, the enemy gunship returns and catches the Helena with a full salvo amidships. 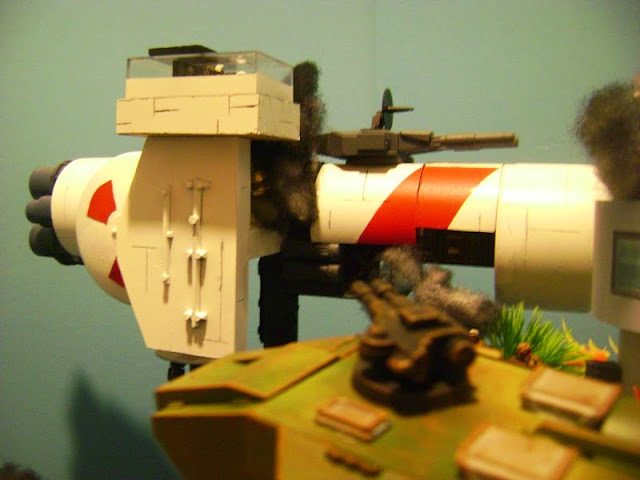 And it begins to lose control 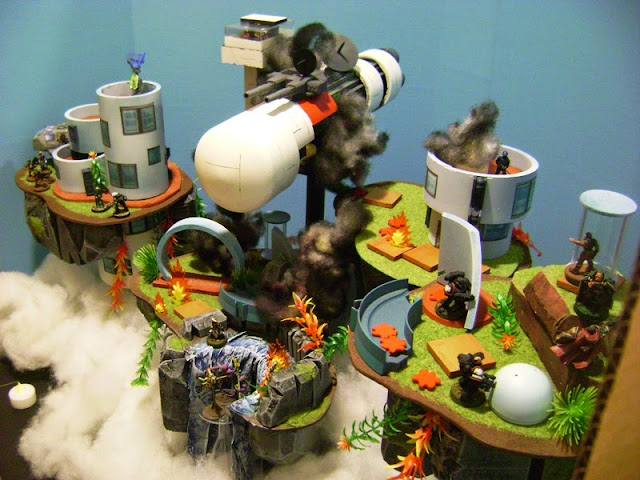 Adm King: This is KCS Helena, we are going down.  Repeat, going down over the Eternity Shrine, everyone get clear. 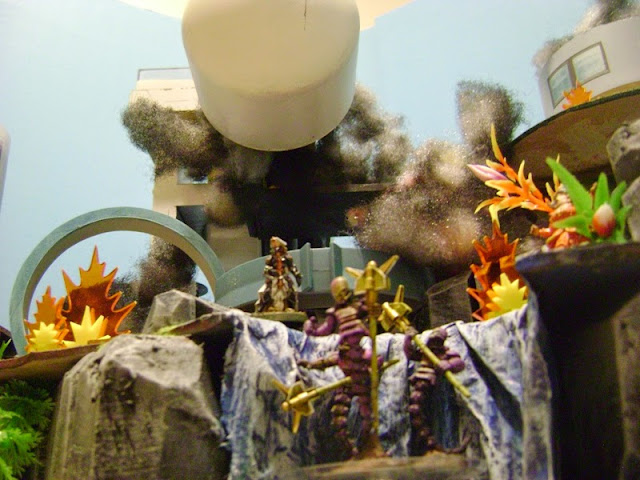 All of the allies run for the shuttles and pods, 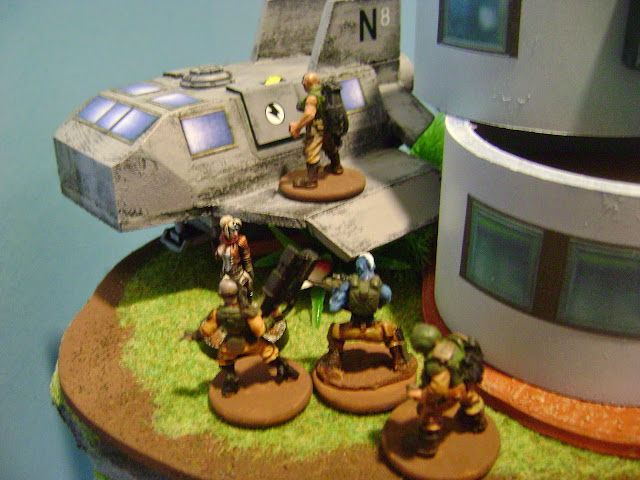 At the last second, O'Blivion grabs Verhoeven ... and with a blinding flash, he teleports them onboard the Passereaux 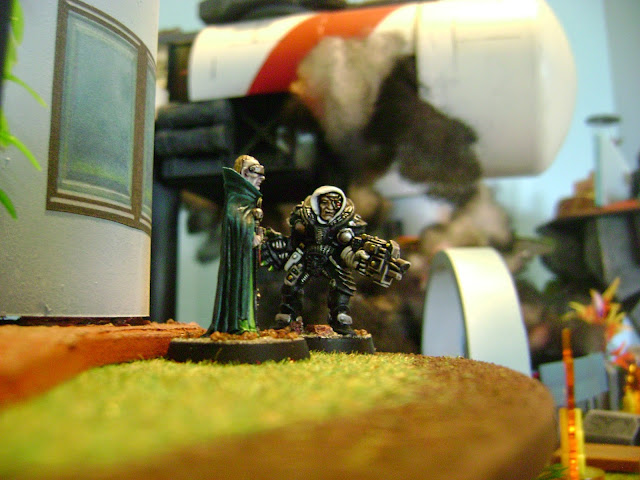 The allies are safely in orbit, and the Awakening has been stopped.
However, the Unknown gunship is escaping, and most tragically, the energies released from the ritual are scouring the surface of Toolenay.

The KCS Passereaux, Ambassador/Agent Sophie, and Eight Ball Command are returning to the Kingdom with the sad news of the destruction of the Helena, and the heroic sacrifice of Admiral King.