SITREP-3
The last drop group making for the rally point is in a running battle with Reich's forces. They are attempting to escape off the northern map edge and the safety of the Alliance perimeter. The creek is fordable, but counts as difficult terrain. 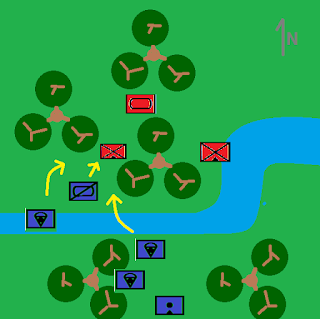 The Battle
Briefly, it came down to if the Alliance troops could push through the western break in the jungle before the Reich could throw enough units in their way. 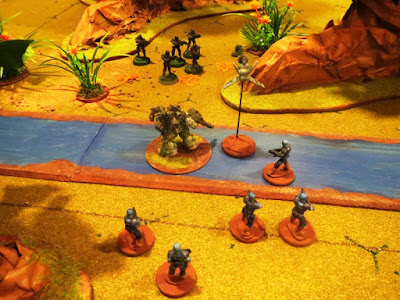 First, in the path was a single unit of Reich Automs... 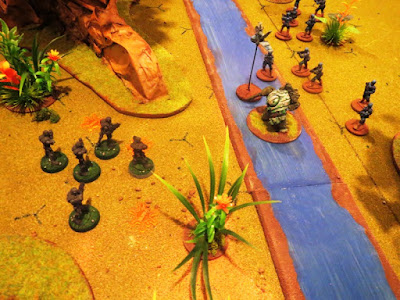 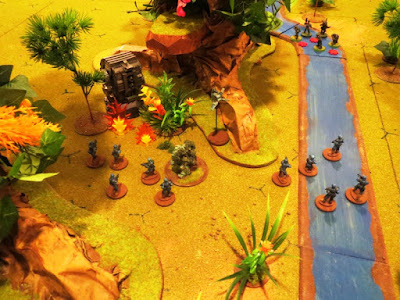 ...the Reich's problem was that their units kept getting fed in piecemeal and they could never establish a solid defensive line.

So, for my extended business trip, I had the bright idea of packing not only "Agent Sophie", but miniatures of her siblings, "Commander Robert", and the brilliant physicist, "Dr. William" and taking pictures of them at each stop on my trip.  Basically, "Flat Stanley" using miniatures.

It was all going just fine, until apparently a Malaysian customs agent decided that he deserved the figures more than me.  Yes, my checked luggage was inspected by Malaysian customs, and the small figure case never made it to Singapore. I am still very angry. There is no recourse here.  The monetary amount is not significant, and my initial inquires with the relevant bureaucracy were met with the standard blank stare of infinite indifference that governmental bureaucracy is so famous for. It was clear my rage and fury could be just as equally productive channeled into pounding the sands of the Sahara for the rest of eternity.

What now?  Well first, I refused to let it ruin the trip.  Although I hold no great love for Kuala Lumpur, my next (and last) stop in Singapore was the best, both professionally and for my own time. Next, my kids and I have decided to use this as an opportunity to pick new figures and animate their tabletop visions of themselves with even "cooler" (their words) stuff.

Lastly, my daughter came up with a GIGANTIC cross-blog idea for this Christmas that we will be revealing to all of you very soon. She always carries a "make lemonade from lemons" attitude and she never ceases to warm my heart.

I think my next post will be the unveiling of the new minis...