I got into the Northstar pre-order of Rogue Stars.  I bought the hype so hard, that I ordered an ebook of the rules to read them right away.  Well, not my thing at all. Totally took the wind out of my sails. I expressed my disappointment to airbornegrove and he suggested I give "Donnybrook" a try.

The game reported below is assembled from an almost uncountable number of sources. The Universe is (sort of ) 40k. The scenario was rolled up from the Rogue Stars Rulebook.  The rules played were Donnybrook. (well, Donny'K). Let's not even get into the minis and scenery.

Background
Spies for the Kingdom of Colores have discovered that a copy of plans for the construction of warp imploders are located in the “Remote Imperial Archive Station 881” on the planet Sca..(REDACTED BY DISNEY/LUCASFILM). The Kingdom of Colores would like to get the plans and deny them to the Imperium. The Imperium has spies of their own, and is aware of the Colores plot.

Additionally, a Trader in the secret employ of the Navigators Guild is at the Archive pursuing unrelated (but equally proscribed) research. All this attention directed at the Archive threatens to expose the Guild's research to the Inquisition.  The Guild explained to Colores that since this whole donnybrook was instigated by Colores spies, if their clandestine Merchant is arrested, Colores will be held responsible.

SITREP
Both forces arrive at the Archive at almost the same time.  The plans are located in the main building at the center of the map.  The objective is to get to the plans and transmit them to the HQ. A secondary objective is to recover/arrest the Navigators’ Guild Trader. 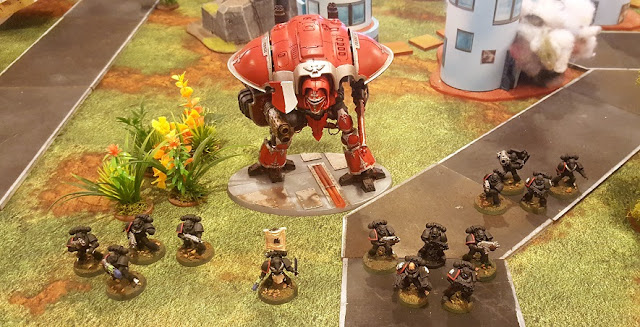 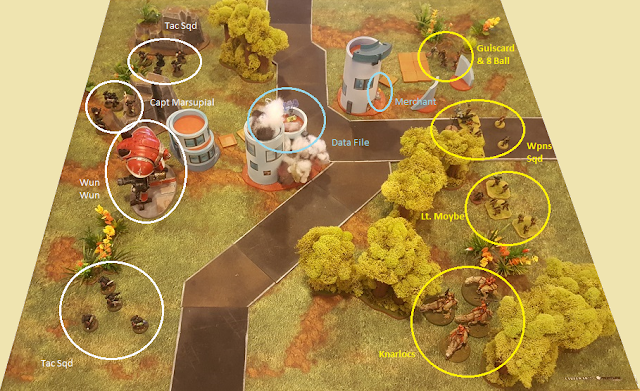 THE BATTLE
Cpt. Marsupial did not see any of the enemy forces yet. It was possible his unit had arrived first. Suddenly however, there was a loud booming as Imperial Combat Construct “Wun Wun” opened fire on the main building of the Imperial Archive Complex. 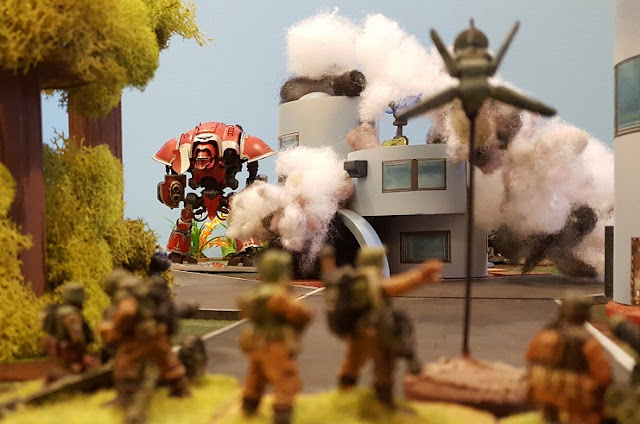 Cpt. Marsupial
“Wun Wun, what are you shooting at?” the Captian radioed to the giant robot.

Wun Wun
“The complex, Sir. You said it was full of ‘Rogue Traitors’”,

The construct fired again. The blast was so enormous, Cpt Marsupial was knocked off his feet and little Rogue Stars danced across his vision. 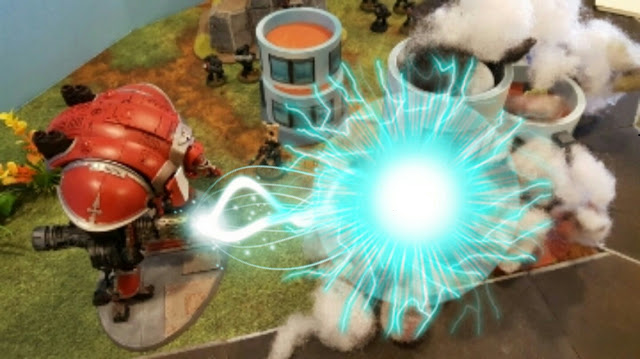 Unfortunately the building was already ablaze…

Meanwhile, hidden on the other side of the Archive... 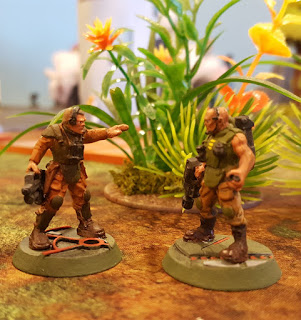 Sgt. Mannesmann
“Well Major, I guess the Imperials are here.” He said dryly.

Maj. Guiscard
“Destroying their own sh*t again…  typical.”
then keyed his comms.
"Everyone move out.  Weapons, cover the main bulding. On the way back, we will scoop up this Merchant / Spy requested by the Guild”
------
As the Colores Heavy Weapons Squad moves into line of sight, a chastened Wun Wun exchanges fire

while the Honschu riders spring forward to try and come to grips with the Tac Squad in front of them. 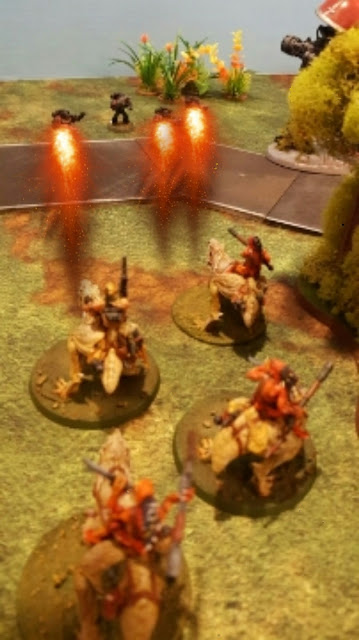 The view in the center is obscured for both sides by the burning Imperial Construct and Archive building, so Eight Ball moves cautiously toward the hiding place of the Merchant and the main objective. 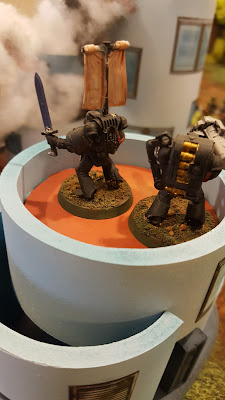 Cpt. Marsupial radios back to HQ,
“The objective is burning and the whole area is overrun by fleeing Imperial staff.  We cannot assess enemy strength or intentions, because our targeting sensors cannot discriminate between our staff and the enemy. Can we get an overflight by a Stormraven?”

Imperial Comm Tech Jones
“A Stormraven is primarily a transport craft, Sir. Do you mean a Stormtalon?”

Cpt. Marsupial
“Yeah, Stormtalon, whatever  …. can it overfly our position and deliver some ordinance into the far treeline?

Comm Tech Jones
“Well Sir, delivering ordinance is done really well by a Stormsurge, but a stormsurge is a Tau weapon and it can’t fly.”

Cpt. Marsupial
“Storm friggin whatever!!! Hang on... let me check the database myself”

Cpt. Marsupial
“FFRRGGG!!!!
That’s it, I’ve had it! I’m done! We’re supposed to be the most elite fighting force in over forty one THOUSAND YEARS of human history, and we have the vocabulary of an eight year old!
Here's an idea...maybe, just maybe if I go over to the enemy, SOMEBODY over there will share a THESAURUS!" 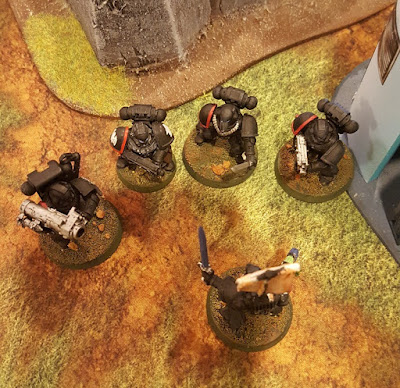 Cpt. Marsupial
“YOUR MOM’S A HERETIC!!!” 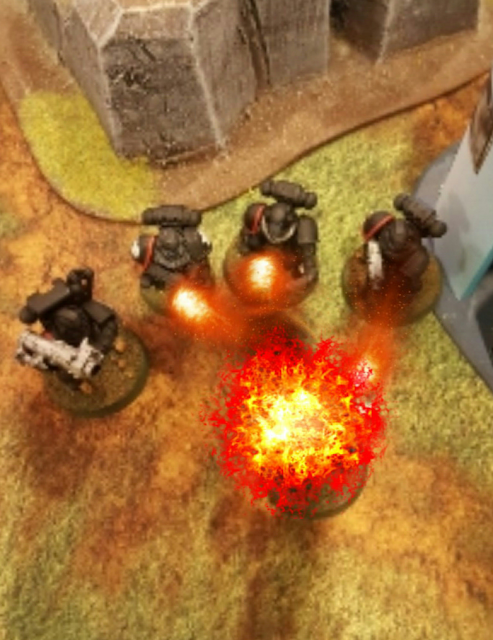 Ok, so I HAVE to break the fourth wall here:
In the middle of the game we pulled the event card and rolled on the table.
The result is called “I gotta be me!”, and it states that a “prominent member” of the squad says: “I can no longer fight for a lie!” and declares his intention to join the enemy.  (you then roll on another chart to see what the unit does)
The result of that roll?  His unit immediately turned and summarily executed him!

I don’t care if that result ever happens again.  Seriously, that’s one of those hysterical moments in gaming that will stick in your memory forever. I am totally hooked.

I think all I need to write from here is a summary.  I mean really, is anyone going to be paying attention?  'cause I'm not.  I'm still replaying that madness in my head.

... Colores got a unit to the burning building (Eight Ball) and they lost 3 out of 4 guys to the fire before the last guy made his rolls and transmitted the files to the rebel fleet above Scari(REDACTED BY DISNEY/LUCASFILM) 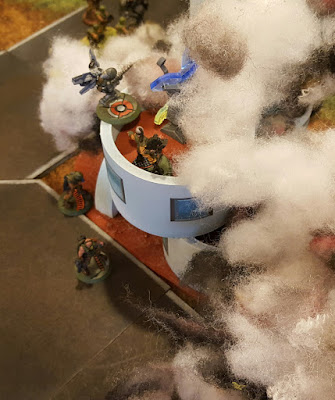 So About This Crazy Game...
Donnybrook is a card driven set of rules described by the authors as skirmish level for the pike and shot era.  It is a great rulebook by layout and execution. The author explains that the rules are derived from his homebrew set that he uses pretty universally. There is even a batrep online where the rules are used in a battle between Nazi’s and a combination of zombies and other monsters. (The Link is here: LINK)
So the ability to modify is there.

The deck you build for a Donnybrook game includes a card that triggers random events. The first card drawn for the game report above was, of course, the event.  We rolled on the chart, “A random building catches fire.  Any figure in the building when their card is drawn, must roll 5+ on their ability die, or be wounded. The fire remains for the rest of the game.”

Guess which building ended up being on fire?
…and this was just the havoc caused by the FIRST event. Then the next time we drew an event,  complete insanity …

What a great time. If anyone is interested, I can do a follow up post that will run through the mods I used for sci-fi.
Labels: Battles Donnybrook