Hello Fellow Bloggers,
Apologies for the long time between posts, I have no excuse except the standard “real life” explanations.

Although I have not been blogging, I have been busy gaming. I just ran a 12 person Shadow Wars event. It was great! Basically, it was a huge game of Clue (or Cluedo). There were 6 games and the Kill Teams were collecting Clues instead of Promethium caches. Between games, the players did all the campaign stuff on their teams from Shadow Wars, but also executed a turn of Clue. What really seemed to get the players “all in” was the mechanism for acquiring an Operative for the next game. Since there were no promethium caches to trade in, a player would get access to an Operative if he was the first one to rebut a theory proposed by another player. THAT brought the house down.

Since we wanted everyone to get 6 games in, we didn’t use the rule in Clue, where a player who made an incorrect accusation was eliminated from the game. Instead,  players who made an incorrect accusation, were branded “An Agent of Chaos”, and were hunted by the remaining players for the remaining turns by using the “Ambush” and other scenarios that reflected their Renegade status.

In the end, we had 4 players on the run accused of being Agents of Chaos, and the mystery was solved on Turn 5.

Here are a few pics of the event…

Here is a pre-game shot of "Jericho Anchorage", an orbital space station (and yes there will be a follow up post on the construction) 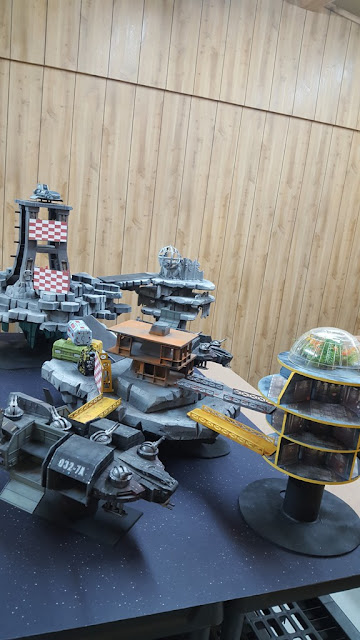 ...and a pre-game of the KCS Mary Shelly in Drydock at Temasek Harbor 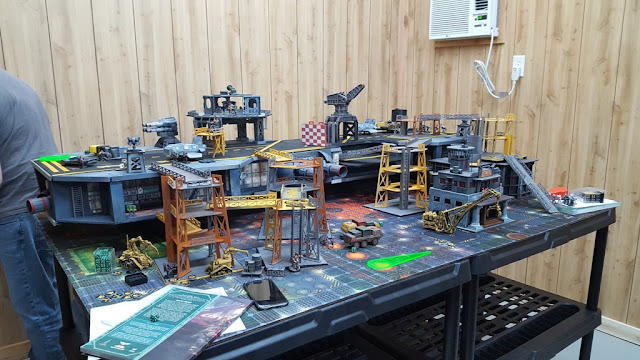 An in game pic: 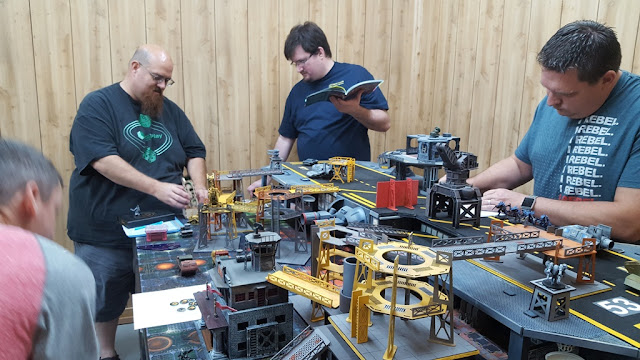 I made up a deck of cards and a Case Sheet for players. If you are interested in running this, let me know and I will email you all of the material to print out so you don’t have to reinvent the wheel.

Did I mention I made a shirt? 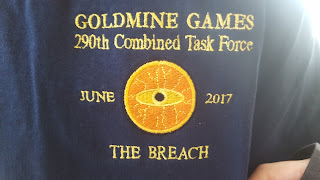 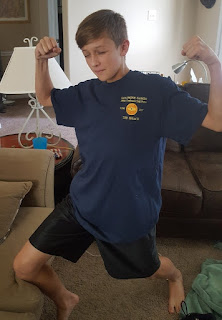 Here is the player brief and the rules:

Campaign Background
Within Sector Six there are worlds and Sub-Sectors that remain loyal to the Empire. The Rentlaw SubSector was one of those worlds until it was torn apart by a violent uprising.  All that is left of the Imperial possessions is Rentlaw Prime.  A Diplomatic and Imperial Services task force was sent to the world to discover the causes of failure and develop plans to recover the situation.

The co-Leader of the team, Minister Rastakaur has been murdered, and the situation is collapsing. The remaining leaders cannot trust one another and the conspiracy behind everything seems to be flourishing.

Situation
Your team has been employed by one of the main suspects. Your remit is to collect evidence by any means necessary, clear your employers name, find the killer(s), and expose the conspiracy.

The Rules
This will be a one day Shadow Wars Event.  There will be 6 games played, and the rules regarding Team progression will be used.

The cards will be a deck of suspects, weapons, and locations.

One card from each category will be removed from the deck and set aside. This combination of Suspect, Evidence, and Location is the guilty party and the incriminating case to made against them.

The players will start without any information and will fight to accumulate clues. For each objective secured by a Kill Team in a game a new random piece of evidence will be revealed to the owning Player. Also, at the end of the game, the winner rolls a D3 and gets to see that many additional cards. The Loser will have 1 card revealed.

Players are trying to figure out by accumulating evidence, and then using the process of elimination which card from each category has been removed from the deck and points to the Suspect, Evidence, and Location of the murder.

After each game, each winning player can propose a “theory” to the crime. One player who has seen a card that disproves the theory will show that card to the play who proposed the theory.

Also, after each game, ANY player can make an ACCUSATION, and present their solution. If they are correct, they win the campaign. If they accuse wrongly, their team is branded heretics and traitors, and will be hunted as conspirators for the remainder of the campaign!
----

It's good to be back, and thanks for looking!
Labels: Battles The Breach