I ran an Apocalypse Style battle at Goldmine Games, so instead of posting, I’ve been busy building and preparing for this event. It was a lot of fun. We maxed out attendance, played 4 full turns, the game was dynamic, and came to a clear result.

Just before packing it all up to the shop... 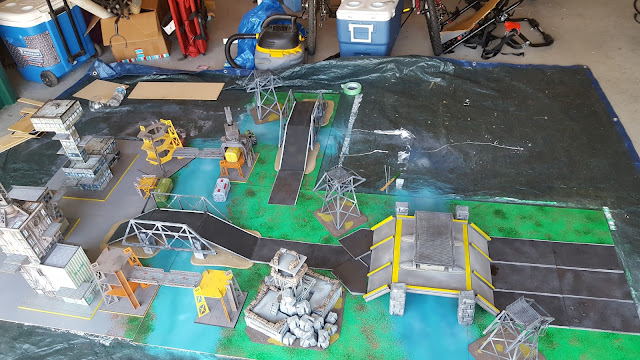 The short version is:
Loosely (very loosely) based on Market Garden, the Imperial forces start at the edges and fight toward each other. Chaos starts in the center and tries to keep the Imperials from linking up.  Additionally, each player was assigned a profile that affected their deployment, the detachment org to use, and their victory conditions. I went to a great deal of effort to make sure that the Chaos and Imperial profiles were not simply mirror images of each other, and the profile objectives would interact well.

The game brief is 2 pages and there are 12 Profiles to choose from.

I have a few thoughts… (WARNING: EXTREME SOAPBOX GRANDSTANDING AHEAD)
What a great exercise. I really enjoyed designing the scenario. I’m old school and at this point of evolution with my hobby, a “Narrative” only kind of guy.


This is a scenario…. 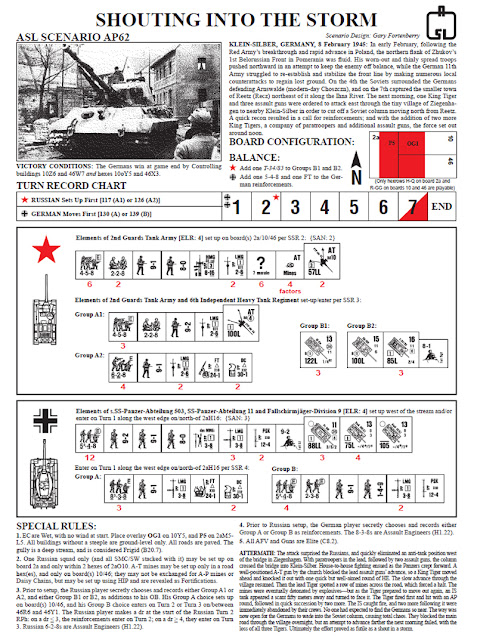 I don’t know what this is…. 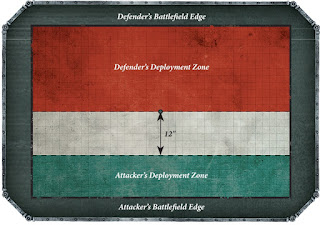 There were many elements in the event that broke the standard 40k game paradigm,

1. The irregular shape of the battle area
2. Deployment was sequential by player and the deployment zones were all over the place
3. Force Profiles determined what detachment a player could take, and what the force should be built to do
4. Clear Objectives WITHOUT any gamey definitions (“Take the Bridge” means TAKE THE BRIDGE, not occupying an arbitrary coin within 3”) and at the end of the game the player would tell me whether he achieved it

By creating these special conditions, I knew I had stretched the players' tolerance for shenanigans.  To their credit, they all came with an open mind and completely played in the spirit of the day. It was fantastic.  They all had complimentary things to say about how the narrative scenario was designed, and how it played out.

Here is the event brief, with the map, all the rules, and profiles:
LINK HERE

One of the guys, Cody, took a video of the game from his POV...
LINK: Venomous Wargaming
(Thanks Cody!)

From the “What could I do better?” side…

FIRST
While the Imperial players could achieve the objectives for their individual Profiles, overall victory was not possible. Now, I don’t know if I would change that if I ran it again, because if player experience hinges on achieving their individual objectives, I could simply remove the Overall outcome from the stakes. That would mean simply tightening up some of the objective descriptions.

OTOH – if I tweaked some of the deployment zones, I think overall Imperial Victory would be within reach. (but either way, I need to tighten up some of the individual Profile Objectives)

Now, I played a lot of historical boardgames with my Dad when I was growing up, and “winning” those games usually meant just getting a better outcome for your side than the actual result. For instance, in the game “Afrika Korps”, by Avalon Hill, Rommel and the Germans are going to lose, but winning in this context was defined as “can you extend the fight longer than Rommel did?” WIN!

However, I don’t think that player satisfaction is possible if there is no historical yardstick to measure against. (in short “Losing is Losing”) So, talking myself in a circle here, I think changing some of the Imperial deployments is needed.


I’m not going to post pics of during the game because of the many, many unpainted miniatures.  Don’t get me wrong, I’ve had a great time and everybody has been courteous and fun. However, when you invite people into “your” definition of the hobby, they bring “their” definition of the hobby. Working on the last 2 events has really brought that home, and posting on this blog about my own little Imagi-Nation has clearly suffered.  Watch this space…