Hello Readers,
I know I have been away for awhile and you have my apologies.

HOWEVER!
I am back, and I have the new Apocalypse Game in my hands, and I will walk you through some of the cooler items in the game...

Thanks to Goldmine Games for promptly getting my copy to me on Saturday at the opening bell! 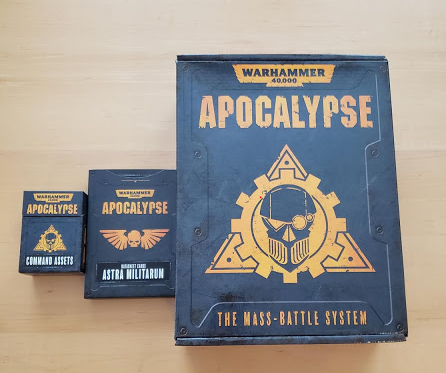 I bought the main game, a set of cards for the IMPERIAL GUARD (I don't know what this "Astra Militarum" stuff is), and what I thought was an "extra set" of Command Cards. 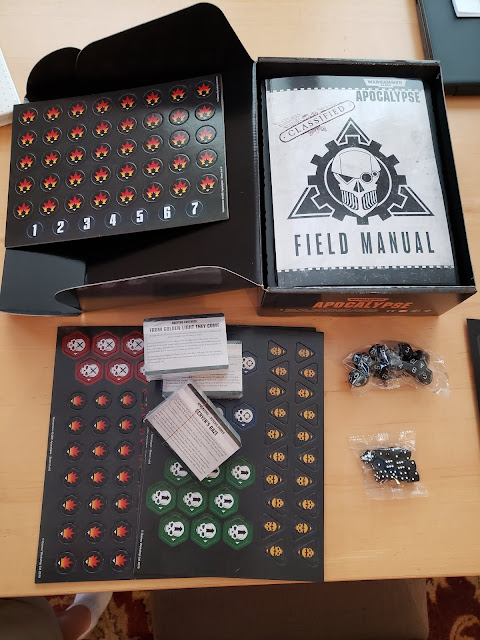 There is a TON of stuff in the box, and I won't provide an exact count here, but WOW, tokens, tokens, and more tokens. There are more than enough for...
1. Marking Commanders and Units that are "Out of Command"
2. Orders - Aim, Advance, Assault
3. Blasts - Small and Large
4. Damage/Wounds
5. Objectives

Then Cards, Cards, and more Cards...
300 in all, split between factions and subfactions, then some cards work for multiple factions, and a large number of "universal" cards.

These cards are buffs and special events that you throw in to randomize the action. They are pretty fun to look through and imagine the in game effects, and I can tell you from just the 2 games I have played, the effects do not disappoint.

There is a problem though, I'll get to that in a minute..

But first! The Data Cards... 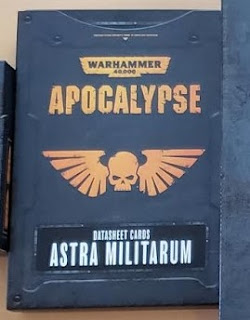 The data cards for the factions are nicely printed and presented, but they do not include any Forgeworld units and the sheets themselves are available as a free download, so not really an essential item, and since I use a lot of Forgeworld stuff, the card deck feels incomplete. YMMV.

The Command Asset Cards, the Expansion, and the problem... 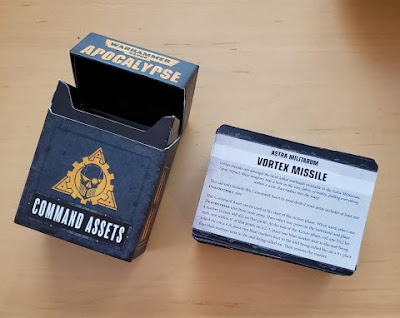 You see, there are no duplicates in the set that comes with the starter, and everywhere I read, this was supposed to be "the extra set" so each side in a game could pull from their own deck.

BUT THAT IS NOT HOW THIS IS...AT ALL

This is an "Expansion Deck". It has no cards in common with the base set.  Now, don't get me wrong, the new cards are cool and include the "Vortex" missile (shown above), and who doesn't like a battle with Warp Energy being flung around like cheap movie popcorn?

How do you divide these cards between players/sides in a game?
Now I admit, this is a non-issue when both side have a copy of Apocalypse and Expansion Command Cards, but Games Workshop said I only need one copy of the game, so they started it...

The rulebook says each side/player is supposed to build a deck of 30 cards. These cards come from the faction specific and universal cards.
Now, let's assume (to explain by example)  you are preparing to play a game of Space Marines versus Tyranids. The Space Marine player will pull some of his deck from the Space Marine specific cards and then want a few (or a dozen) from the universal cards to comprise his deck of 30. Same for the Tyranid player (except, of course, he will use Tyranid specific cards).
The rules say the players will make a common pile of the universal cards they each want and then shuffle and deal them out evenly to each faction..

How does this work? How do we determine "common" wants? The rules offer no further detail. Do I pick first, and then my opponent goes through my universal picks? That seems like a big advantage... he gets a peek at the part of my deck made up of the universal cards and pulls stuff that's really valuable to me.

Also, after we split the common wants, the players' decks are no longer composed of 30 cards. Do I pick again? Do I have to let my opponent examine my new picks and create a new common pile? Do we just start the game with <30 cards? Again, the rules offer no explanation.

Worse yet, take a step back to the common pile. If we deal those cards out between us, and since now my deck is short, can I go back into his deck to look for my second choices?

I think the simple solution is to shuffle the universal cards and deal out the common cards into 2 piles BEFORE ANY PICKS ARE MADE. One pile for each player, then each player picks through their half to complete their deck. What's left from each pile, let's call those the unwanteds.
THEN
The players switch unwanted piles, and they can trade out any cards from their deck if they find something more useful to them from their opponent's unwanteds.

Like I said, not a problem if each side has a copy, but GW made the claim 1 box of Apoc was enough to run a game. There are "enough" cards, but there needs to be a much more detailed explanation of how to "share" cards. I sense a "clarification" coming very quickly.

The mechanic where damage effects are calculated at the end of the turn is brilliant.. you get scenes like this... 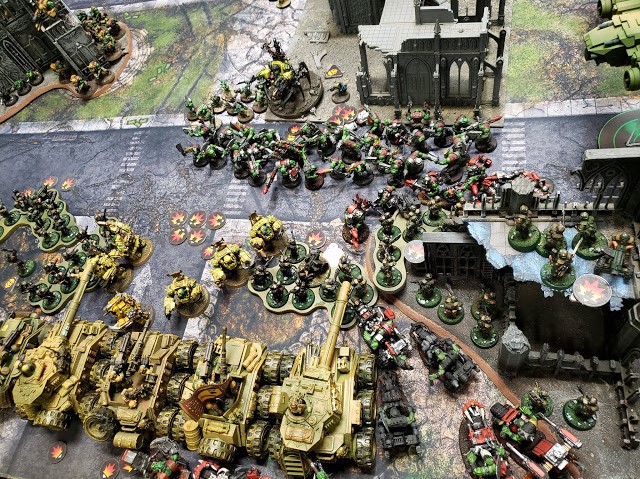 Everybody is dishing out the damage. All those blast markers are the hits and wounds inflicted through the turn. THEN, at then end, everyone attempts their saves, and effects are resolved... 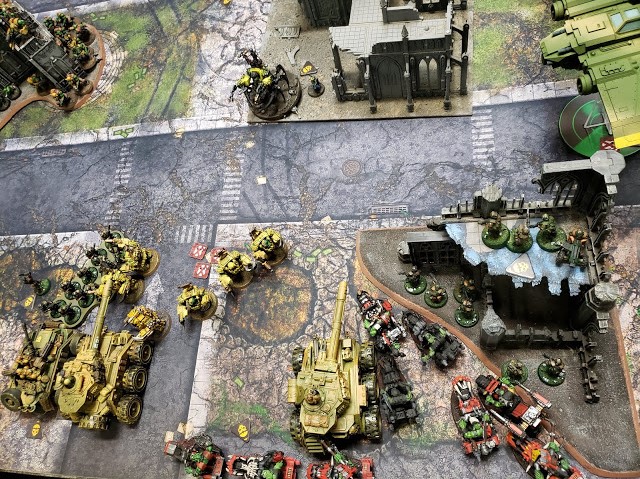 I highly recommend getting Apoc if you like big battles, with the qualification about the Command Cards, I think this is a really well done an thought out game from GW.

Let me know if you fine folks have any questions...
Thanks for looking!