Battlefleets of Sector Six: Ships of the 4th Reich

Previous to the Siege of Rentlaw Prime, the 4th Reich had never shown real naval strength beyond individual ships and small raiding squadrons. In fact it was the engagements against the RS Drache (see "Voyages of the Mary Shelly") that the first capital ship was known to have been deployed by the Reich.

With the capture of the Imperial Titan Legion (renamed the "1st Titan Army" by the Reich, see "The Rise of Tyranny" Campaign) on Xochoi, all that changed. Always adept at technical challenges, the Reich was very quickly able to reverse engineer the weapons technology of the captured Titans and the ability to manufacture the various types of massive ordnance was realized.

After the ceasefire, construction practices for ship hulls to carry these various types of massive ordnance followed. After 5 years of peace, the "HimmelWaffe" (Heaven Force) is ready to crush the Imperials and their allies and drive them from the Rentlaw SubSector once and for all.

Battleships
Improving on the design of the original RS Drache, these next generation Battleships deploy over 17 primary turrets for nearly complete coverage of the fire arc sphere. Additionally, the mid-hull landing decks can accommodate 2 full Fighter/Bomber squadrons. 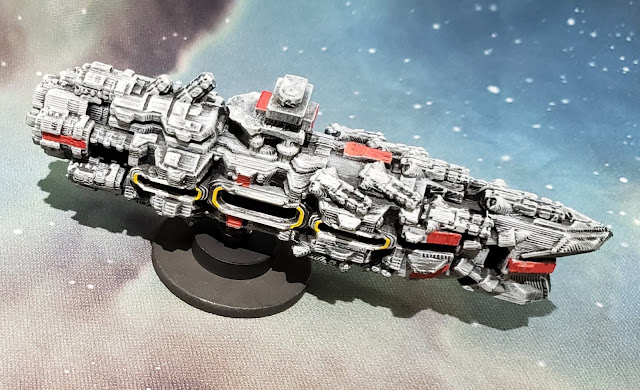 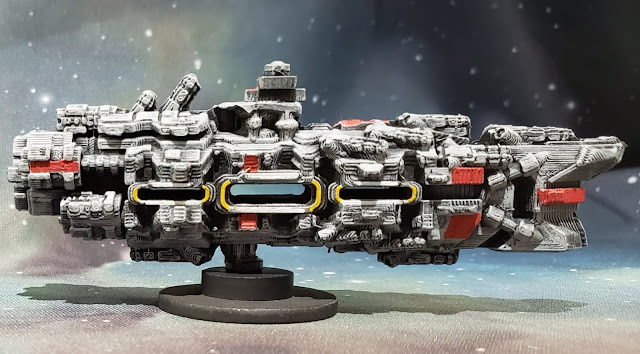 Carriers
The utility of purpose built carriers in this era of naval warfare is an open question. With Battleship and Cruiser classes being able to deploy large numbers of fighters and engage an enemy with direct fire ordnance, the relative fragility of a carrier may prove to be the demise of this class. However, the coming battles may show otherwise. Fighters are easily replaced, and may provide enough protection for the ship itself.
Essentially, this class has the equivalent Fighter/Bomber capacity as a Battleship of 2 full squadrons, but only mounts secondary defense guns for close combat protection. 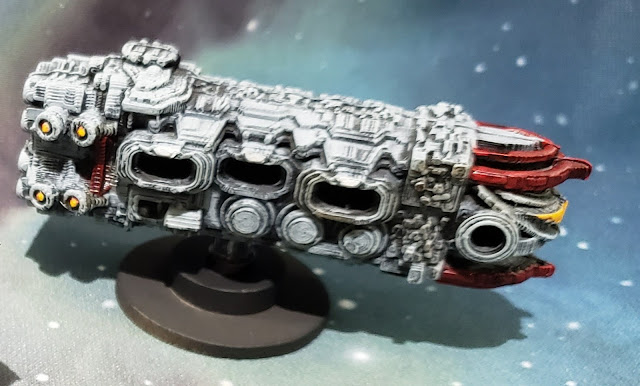 Cruisers
The middle-weight component of the HimmelWaffe, Reich's cruisers are capable platforms with an ordnance throw weight of about 2/3 of their Battleship sisters and can support a Fighter/Bomber Squadron. The hulls have gone through several revisions in the short 5 years of the building program, and sport several different superstructure configurations. 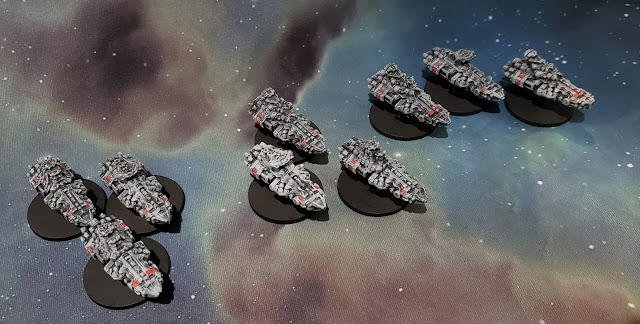 Destroyers, and Fighter/Bombers
Of the smaller classes, Destroyers are probably the weak element of the fleet. Cheaply produced, the class struggles for a place in the fighting doctrine of "big guns and screen" of the fleet. Conversely, the Fighter and Strike Bomber designs are adept at their mission to keep their enemy counterparts at bay while the massive guns of the Battleships and Cruisers pound the enemy.
In this picture, a small sensor laden utility ship can be seen in the lower right corner. Whether this is a Strike Coordinator for the Fighters or a Forward Observer for the heavy ordnance is unknown at the time of  publication. 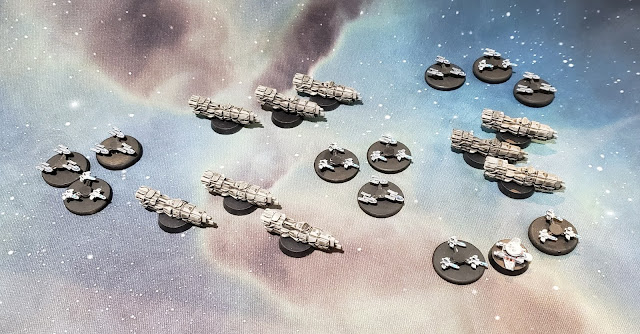 Super Dreadnought
The actual deployment of this massive vessel cannot be verified at this time. If this is an actual pic (not some propaganda fabrication) fighting against this class would be a terrifying  prospect for Imperial or other forces. 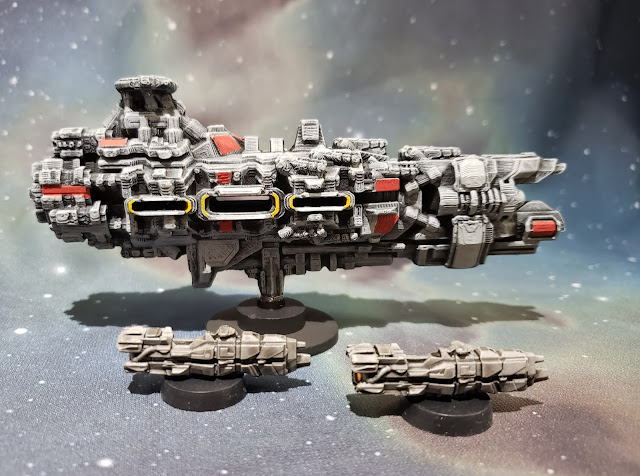 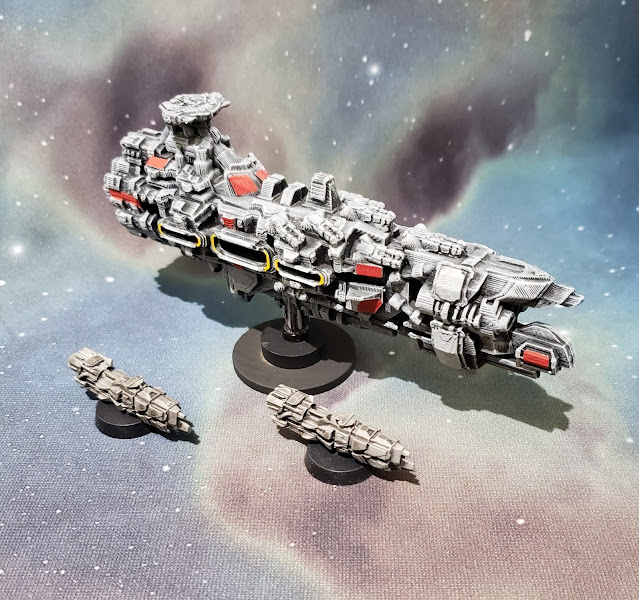 Additional Footage
It is known that the Reich has captured and redployed some Imperial ships, the pic below shows the RS Wolfe on patrol with the Imperial hull renamed RS Vichy. 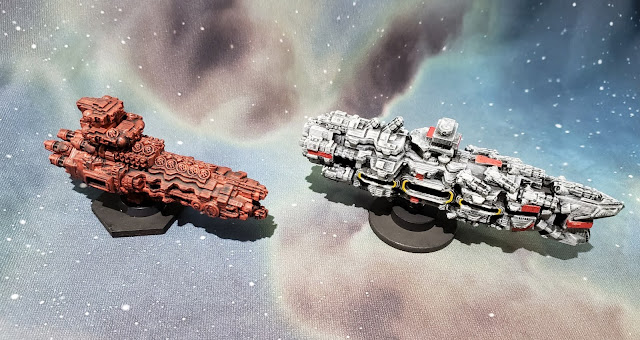 The RS Scharnhorst and  RS Faehig

FILE ENDS...
Hello Readers,
First of all, all of the ships are from a small company known as Dark Edge Designs. He is, in a word, GREAT.  Some of the ships are slightly modified (because I just cannot help myself), but I love his stuff. The ships are really big, have great details, and as they are 3d printed, very very tough for table handling. My orders have always arrived quickly, accurately, and usually with an additional sample of something of a different style to get my imagination going.
He makes a variety of styles of ships, some more WWII in Space as seen above, some much more advanced SCI FI, and lots in between. Dark Edge also makes a wide variety of items for Gaslands. Please go check out his FB page: Dark Edge FB
...and most importantly his etsy shop: Dark Edge Games Store
If you are looking to support a small business that does great work, Dark Edge Games fits the bill.
Let me know if you guys have any questions, and as always,
Thanks for looking!
Maj
*Oops, I forgot, Fighters and the recon ship are from Brigade Models, my bad