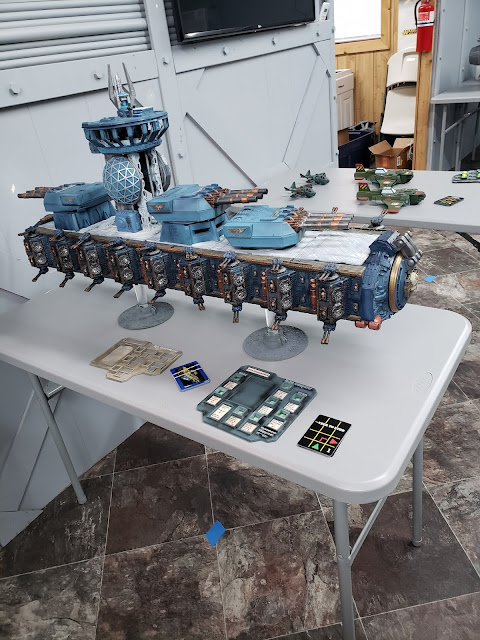 Background
As usual, our story takes place far beyond the civilized frontier in the benighted backwater known as Sector Six. This episode is zeroed in on the long running Imperial civil war here in the Rentlaw SubSector. Over the years, the “Loyalists”, led by Governor Hoewler have driven their rivals back to the capital planet of Rentlaw Prime. From here, the “Imperials” (led by Imperial Governor Donnos “the Pretender” Lackdust) maintain their slender and deteriorating claim to be the legitimate Imperial authority. Much like the Badab War of old, this appears as a contest between Imperial Nobles, with conflicting claims over who is the rightful ruler.

The Scenario
Just six months ago, the Loyalists resumed the offensive, and attacked into the Rentlaw home system and established staging bases in the outer planets and asteroids. The next step is to capture the Covenant Orbital Station above Rentlaw Prime itself. Phase 1 is to destroy the Imperialists ships and control the close orbital space. 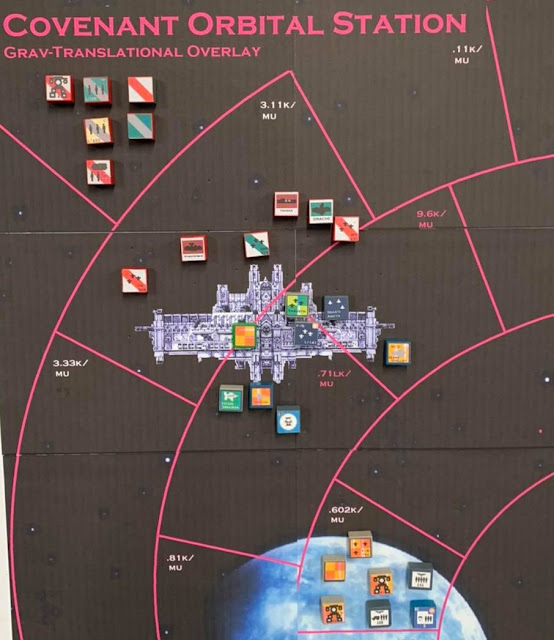 HMS Wheatstraw
The Flag ship of the Loyalist fleet, the Wheatstraw is an Imperial Battleship that was on station in the far reaches of Sector Six, and never received the recall to the Gothic Sector from six years ago. While it is believed her keel was laid on Mars itself, her millennia long journey to this time and place is a mystery waiting to be revealed. She comes to the battle after receiving a communication by chance from Governor Hoewler to report and support the attack on the Covenant Orbital and aid the war to remove the Pretender.

HMS Tanaka
The Tanaka was discovered two years ago when a servitor clerk at Klaendarii Base, whose mindwipe apparently did not remove all traces of initiative, re-discovered a mis-filed obscure entry in an inventory catalog. The Tanaka was found mothballed, orbiting an abandoned fuel processing asteroid in the Malathorne system. Curiously, with her multi deck Fighter facilities, she shares key features with the KCS Mary Shelly. Perhaps they share a common design ancestor. 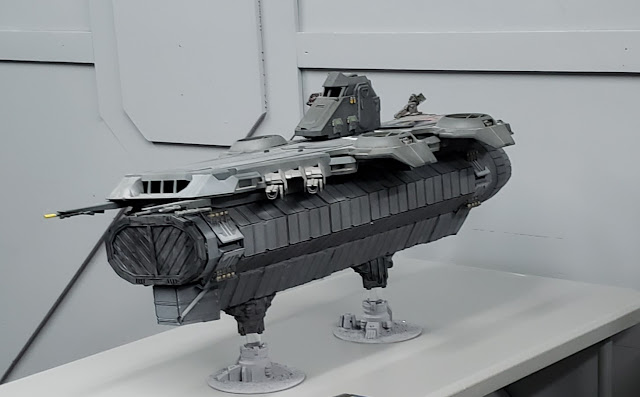 RS Drache (the Dragon)
The Drache is the second battleship to carry the name, the first was destroyed 3 years ago by the Mary Shelley during the Battle of Two Moons. Almost the exact opposite of the Shelley in design, the Drache has an even distribution of firepower and mounts her fighter Squadrons in parasite racks below the hull. She differs from her predecessor by mounting more powerful secondary/AA mounts along her sides that replace the dual purpose assault pods. 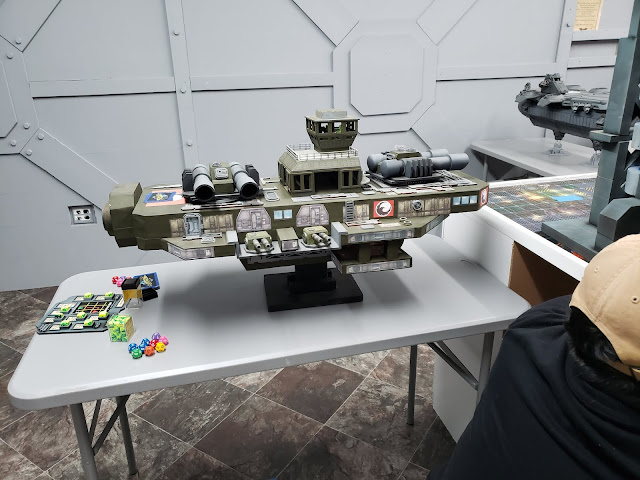 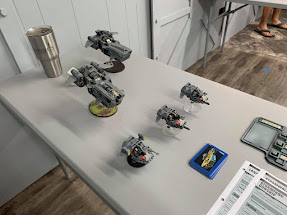 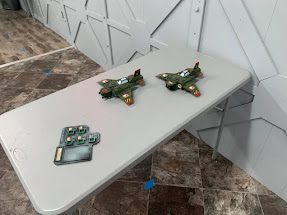 The Imperial Fleet
Occurrences unthinkable in the more civilized parts of the galaxy, are commonplace this side of (and this far removed from) the Cicatrix Maledictum. The “Imperial” fleet consists of a coalition of mixed ship types, with an Imperial ship supported by a ship from a breakaway human Empire and Ork Mercenaries.

IS Idolon
The one “true” Imperial vessel, the Idolon is an extremely fast and agile Imperial Light Cruiser. Built with the agility of a fighter, she is supermaneuverable, and optimally designed for fast diving attack runs and quick evasive turns back into the target. 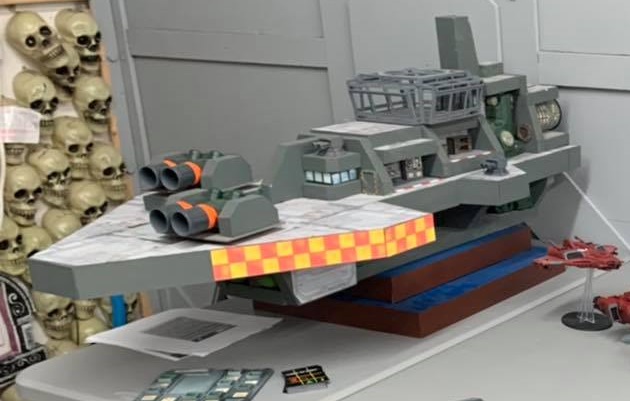 KCS Mary Shelley
Veteran of several battles, the Shelley has been extensively modified from her original configuration due to battle damage. She is a beast of a ship with an asymmetrical layout of her main batteries and a Fighter Launch & Recovery capability across 2 decks 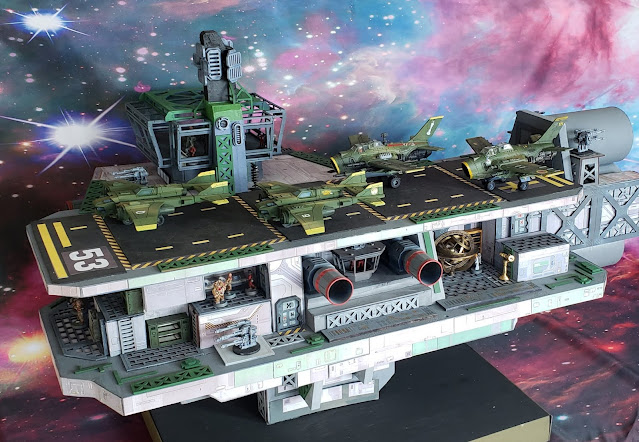 TitanSpika
This Ram Ship acquired its name from a notorious attack where the Kommisar Yardstikk flew straight into the torso of a major Traitor Titan during the battles for Toolenay. It is well known Yardstikk has accepted an unmatched amount of loot to fly again against new enemies. 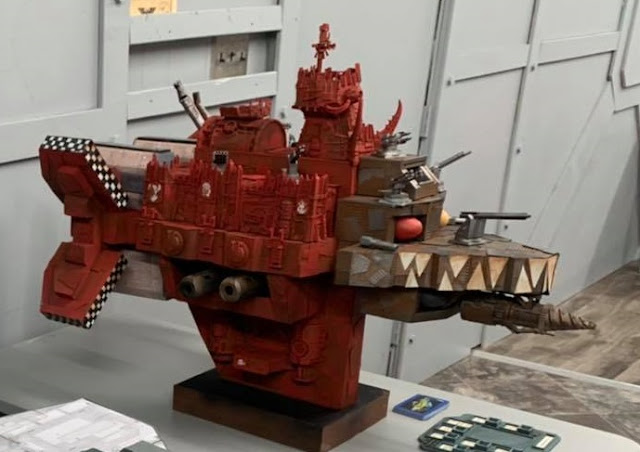 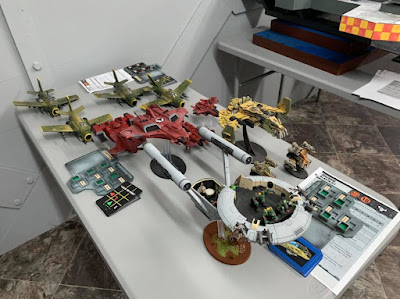 The Battle
The Loyalists transitioned in from warp slightly out of formation, and ended up somewhat more spread out that the Imperials. 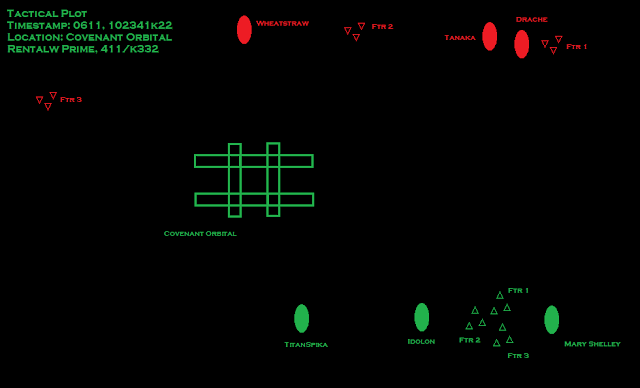 The Loyalist ships have heavier throw weight, but the Imperial ships are faster. 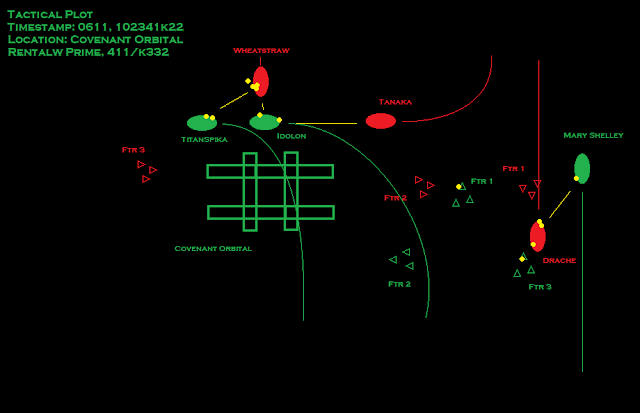 The TitanSpika and the Idolon cut across the bow of the Wheatstraw... 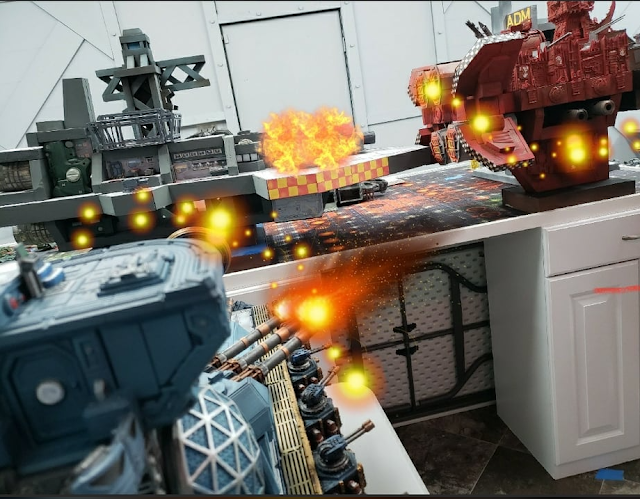 ...while the Drache and Mary Shelley make a straight broadside pass 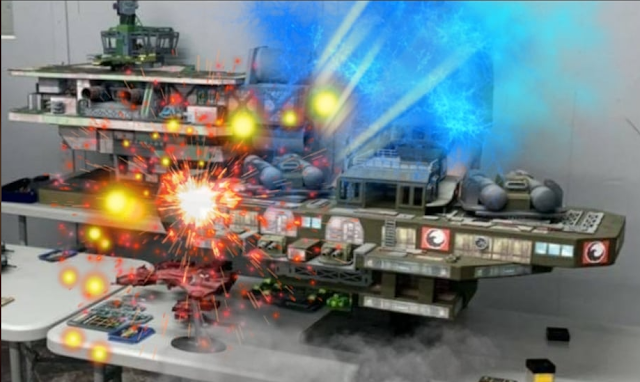 The Shelley scores a silver BB, and cripples the maneuvering system of the Drache. She careens out of the battlespace (for now)

The Wheatstraw drives ponderously forward to the center, to dominate the space with her massive firepower, while the Idolon and TitanSpika circle, seeking out weak points. 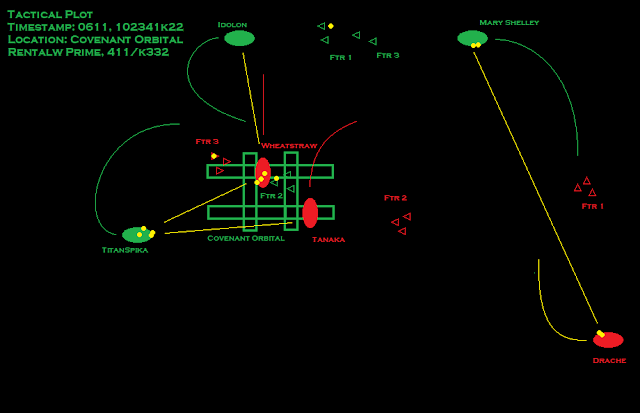 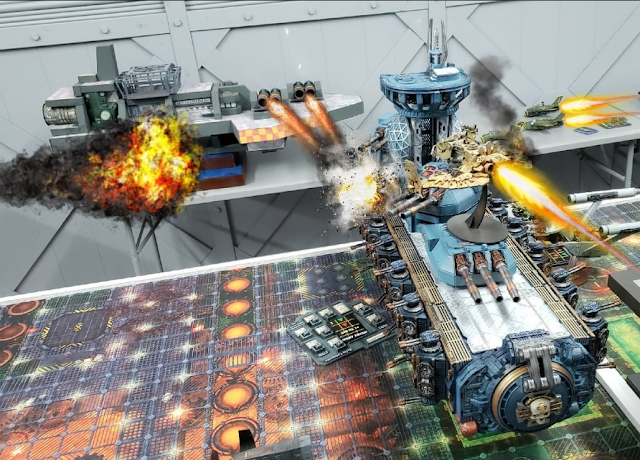 All 3 Imperial ships range onto the Wheatstraw, and the Tanaka makes a navigational error taking her from the battle. 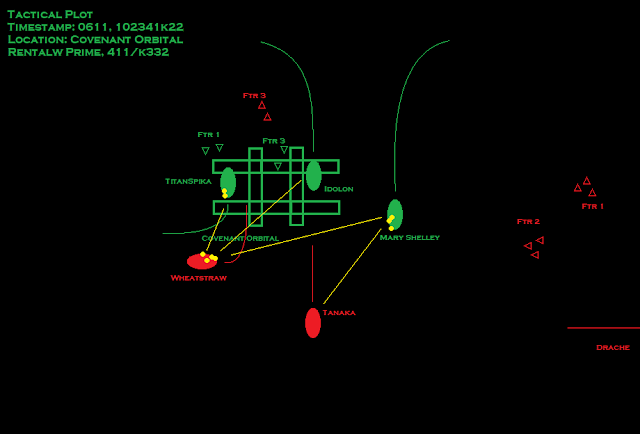 The Wheatstraw still has most of her guns, but the heavy damage is taking its toll. She struggles to maintain headway. 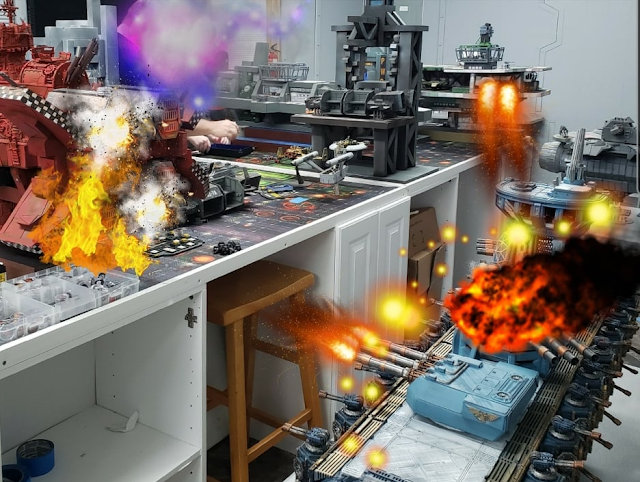 and then the TitanSpika sees her chance, and with the directness of an Ork, smashes head on into the Wheatstraw! 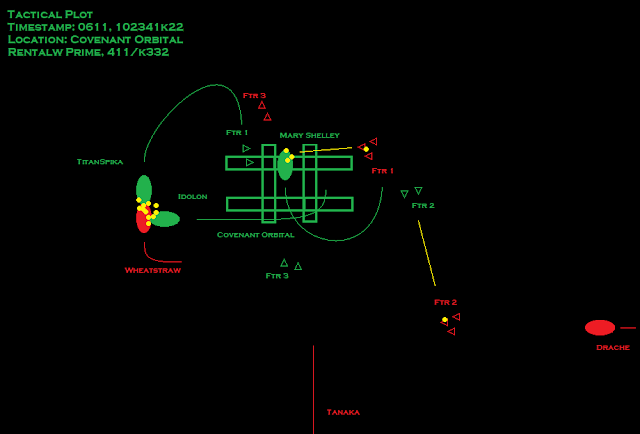 The Captain of the Idolon has his blood up and follows the TitanSpika right in!

The carnage is incredible and the fused hulls spin out of control away from the station...
The collision is shocking, but on the bridge of the Mary Shelley, Captain Thuries maintains his composure. It is obvious that with 2 of her 3 main batteries out of action, 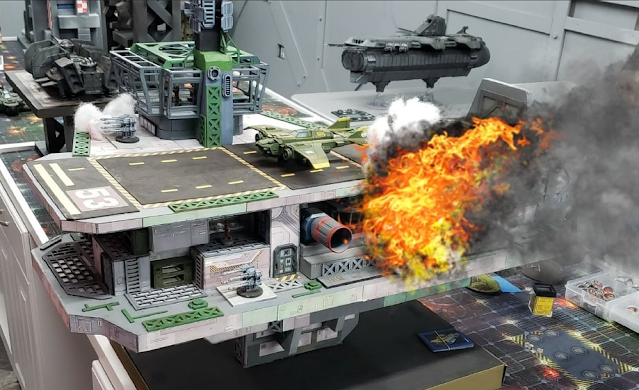 and her fighter wing depleted,

she is no match for the untouched Tanaka and the crippled Drache as they are nearly completing their turns back into range.
"Recover our Bulldogs, and plot a transition to warp. We cannot do anything more here except die." 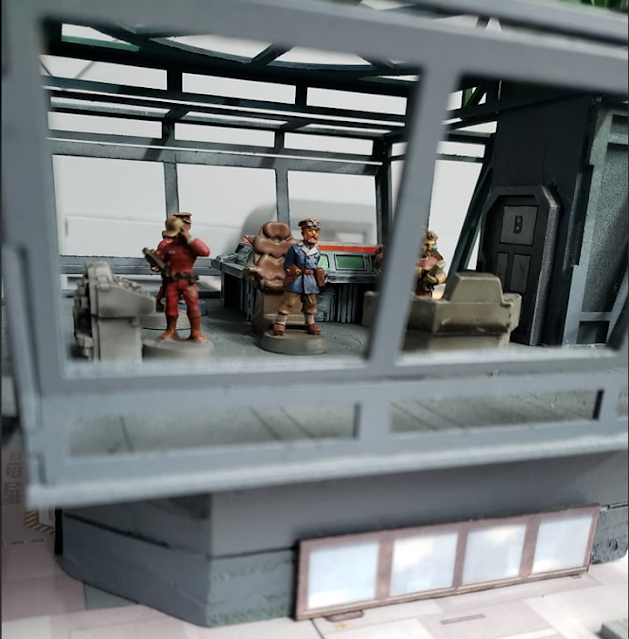 ...and the Shelley leaves the space of Covenant Orbital in the hands of the loyalists...
----------------------
HI ALL!
I know it's been awhile. I have been gaming, but unfortunately, not documenting it on the blog. So as you can see, the group and myself got 6 (COUNT 'EM, SIX!) capital ships together and had a huge battle.
The rules were a combination of the old SpaceFleet pre-plotted movement system and Apocalypse stats for the Pew Pew parts. That let us use the fighter Datacards straight from the Apoc game.
I designed and printed a "Helm Computer" for each Captain... and a "Command Computer" for each Fighter Squadron. 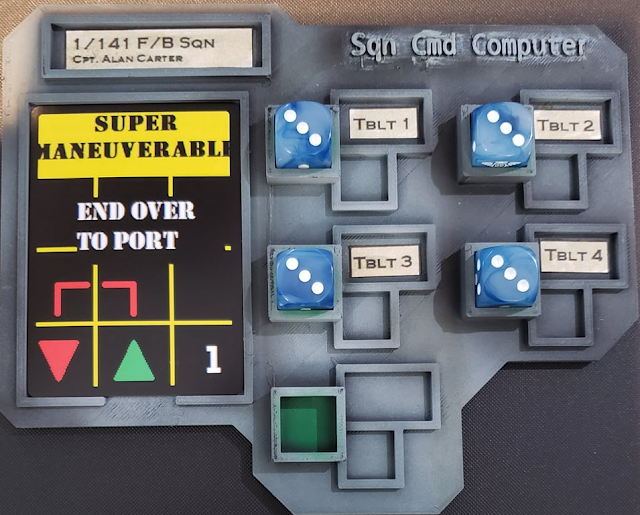 ...and all the Captains got to take theirs home!
It was a great day (...and I sneakily scheduled it for my Birthday :) )
...for you eagle eyed fans, yes I have dropped the use of the 4th Reich, and retconned that they see themselves as the rightful "Loyalists" over the actual Imperial government. There's nothing politically motivated about the change (they're still Space Nazis, and still the bad guys), but there are some HUGE changes coming to my gaming life that make this narrative change very attractive to me.
I'm not quite ready to share the details, but very soon there will be some shocking news, and it will all make sense.
I know it's been awhile, but I hope a bunch of you have questions and comments, I'd love to hear from you.
Thanks for your patience, and thanks for looking!
Labels: Background Battles Siege of Rentlaw Prime