Last we saw the Imperial Battleship "Relentless", she was heavily damaged in action.  http://govgensectorsix.blogspot.com/2013/02/going-on-offensive.html
She was barely able to jump clear and is presently laid up at a neutral station undergoing essential repairs. Once she is spaceworthy, the Relentless will be escorted back to Lugo (the major Imperial Base in the Sector Six frontier).

The Governor General (well, more like his "advisors") see this as an opportunity to gain a capital ship for their small navy.  A daring plan is made to capture the Relentless as it sits in dock. 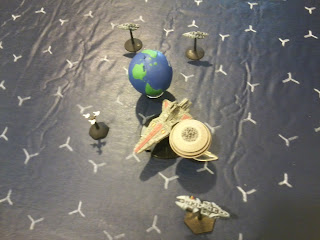 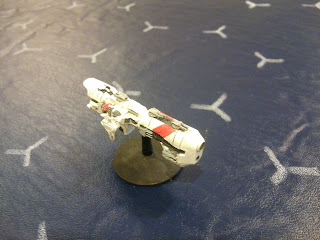 The 3 KC cruisers jump in at a conservative distance. The Imperial units have time to form up and meet them significantly outbound from the station, but just before the ships reach weapons range, the DuGuesclin inexplicably jumps away.
To take advantage of the sudden mis-match the Imperial units accelerate and engage in a furious exchange of fire.
A missile barrage inbound on the Companion 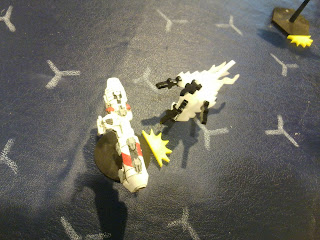 She is heavily damaged and the Imperial Frigate Hera is destroyed 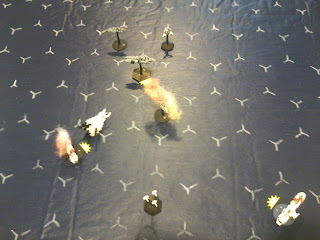 The KC plan is revealed when the DuGuesclin jumps back into the action, just behind the station.  The escorts have been drawn away and the Assault Boats with the boarding party are launched with a clear path. 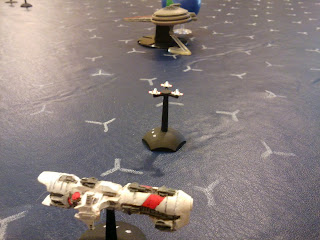 The Imperial commander orders the Auerilia to leave the battle and proceed at best speed to Lugo Naval Base for reinforcements. The Sulla protects the jump and is destroyed. 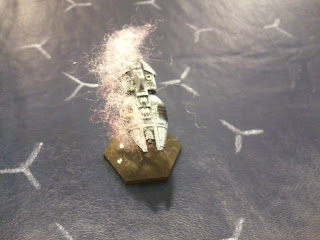 Will the Boarding Party be able to take the Relentless?
Will the Kingdom of Colores be able to get the Relentless under way BEFORE the Imperial Navy returns?
If not, can the KC's win against a major Imperial Fleet?