My Take on Scale and the Table - and a CHALLENGE to you...

I'd like to take a post to talk about scale regarding vehicles, structures and space issues on the battle table.  Please accept my apologies in advance if my writing in this post seems absolutist.  For brevity, I am stating my opinions as "the way things should be".  My approach is no more valid than anyone else's, and most of my best ideas have been inspired by my influences, not conjured out of thin air. I sincerely invite your commentary on the subject. Sooo.....(keep reading, the challenge idea didn't occur to me until the end)

Where I am coming from and the kind of game I like:
I have never been a fan of the 40k ruleset or the universe (too dark) even when I worked for the company.  BUT, I was a huge fan of Apocalypse. The Battle for Hoth and the opening battle for XXX Corps in "A Bridge Too Far" are 2 of my favorite movie battlescenes.   I am heavily influenced by the Major General's page (see this wayback machine link: majgen ), and to paraphrase the General: Table space is at a premium, so objects should be as small as possible without seeming ridiculous. I would elaborate in a slightly different angle.  Tabletop models should be "bathtubbed" leaning in a "toy" direction from their "model" origins.

Buildings For Example
As a kid my parents would never buy me the Marx "Guns of Navarone" playset.  So, obviously in response to their outrageous injustice, I am obsessed with building the perfect supergun/mountain terrain piece. 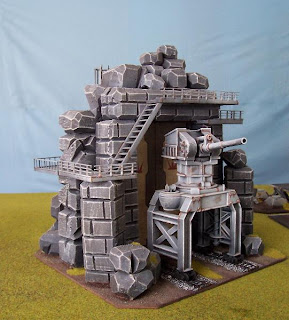 I love this piece.  I built it about a decade ago and have fought countless battles using this and its accompanying set here, but as my views have evolved I realize it has a serious size problem
1. It is over a foot in width and depth. 18" wide! The table footprint is just too much.
2. It is just the gun itself.  I have separate models for the barracks , missile silos, and fire control buildings 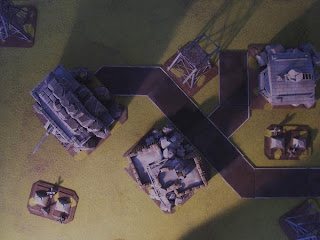 This arrangement is great for fighting "through" an Orbital defense facility, but that means players are picking up the story AFTER the perimeter has been breached.  I prefer to game the attack from earlier. More "Hoth" than "Navarone".
So look at this really old GW paper bastion compared to my builds: 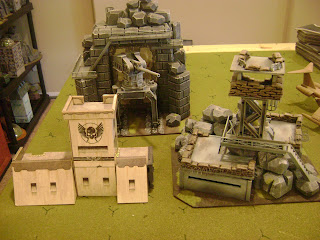 Put a space cannon on top of the tower, and inside of 12" it has everything.  Its simplicity "suggests" all (or most) of the other elements.  So now there is more table for the approach and outer defenses to fight over.

The paper model is far too minimalist (not to mention "skull-zy") for me, so my next project is to re-create the look of my facility onto the footprint of the bastion. I have to bathtub the Space Cannon, Barracks and Fire Control.  Hmmm... (maybe a Landing Pad as well...read on)

Vehicles
Ok, back whenever the Bastion was made by GW, they seemed to have a grasp of what I was talking about.  I posit, that the common complaint that their vehicles were too small was actually a design nod towards more table space.  However, after the current incarnation of the Land Raider they clearly discarded that asthetic. 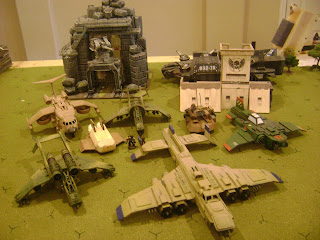 Above are various models, and clearly the GW flyers are HUGE.  The Bomber is honestly as big as the Mechwarrior dropship in the background. Heck, the Valkyrie transport pretty much takes up a 12"x12" footprint. Compared to the grav tank, that takes up roughly a 3.5"x5" area, you might as well put a blanket out there.  Unhappy with my airforce, I have begun rebuilding it. I snuck in a new build, the bare wood model between the Valk and the Vulture. It is only slightly larger than the tank and more rationally fits with my motorpool and terrain features. I'll feature it in a post soon.

Spacing and the Role of Hexes/Squares
If you follow this blog you will have noticed that I use hexes.  Aside from quicker games, I have noticed one other major benefit.  Only one unit can occupy a hex, so it keeps a reasonable distance between tanks.  No more track to track tanks walls.

I am interested in your thoughts.  Wait, ...better yet,
I OFFER A CHALLENGE!
What if we pulled a publicly available scenario, like a Grant Table Teaser or one of the free scenarios from the Skirmish Campaign guys that comes with terrain and orbats (but non-game specific and universal) and each did a setup on our respective blogs.  We could see how much difference (or sameness) our styles brought to a game from the exact same source material.