On the Hunt III: The Fight for Mining Asteroid 318

Immediately following the last mission, link, Specialist Fales hacked the Sachines security net to find out the condition and location of Dr. Xaden.  Her wounds were not as severe as feared, but while being transferred from the Hospital to a secure holding facility, she vanished along with her escort.  The Sachines Security Service was pursuing the theory that the transferring agents were impostors and abducted the Doctor.  She might already be off-planet...

Cross-referenced with information gained from the interrogation of Reichs Col. Paulus, our protagonists, the 8th Special Actions Team, known as "8 Ball", located a small mining asteroid that is actually a way-station for the 4th Reich. Dr. Xaden was there! 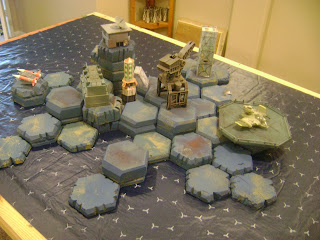 The mission for 8 Ball is to capture the station and rescue their team member, Dr. Xaden.  The Reich's garrison will do anything to stop them, including blowing up the whole place with everyone on it. There are 5 objectives, shown in the picture below.  The main objective is obviously the Reactor, since controlling it controls whether or not the whole place goes boom. 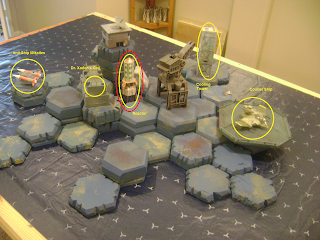 The Reichs garrison is 14 fanatical troopers, led by Captain Jurgen. They are equipped with armored hostile environment suits and high energy weapons. 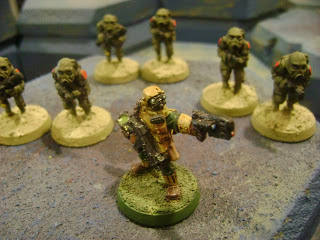 8 Ball has the assistance of Dr. Ourii who has come out from New Cypress to stand in for Dr. Xaden. Also, joining the team for this mission, is mercenary Titus Philo.  He is equipped with his own hardsuit and advanced weaponry.  He has not worked with the team before, but is known by Maj Guiscard through some off the books missions. 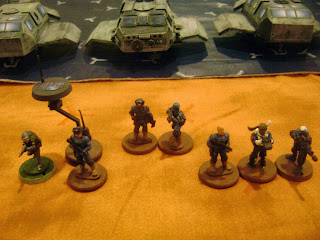 8 Ball could make insertion, but could not completely conceal their approach, so the Reichs troops were ready and alert. 8 Ball split into three teams and began shooting right out of the assault boat doors. 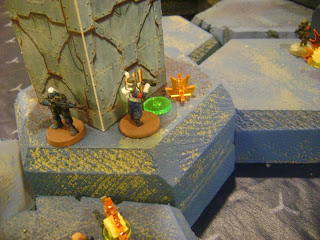 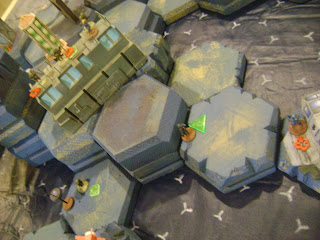 Maj Guiscard made it to Dr. Xaden's cell and brawled the guard into the ground.  They quickly found her skinsuit and started to make their way to the reactor. 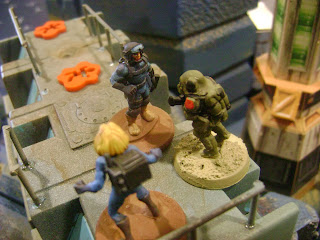 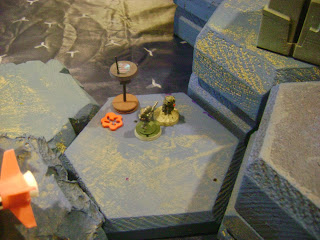 Dr. Ourii made it to the reactor first, but he was not up to the rigors of fighting off several guards and goes down.  The Reichs troops start the self-destruct countdown. 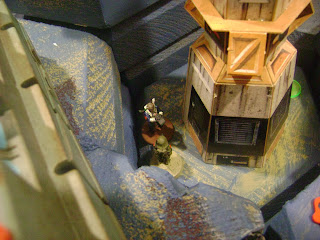 As the clock winds down, every person on the asteroid tries to pile into the maintenance walkway surrounding the reactor.  Shots, knives and fists are a whirlwind in the confined space. 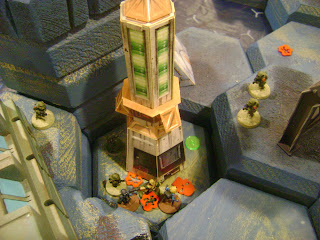 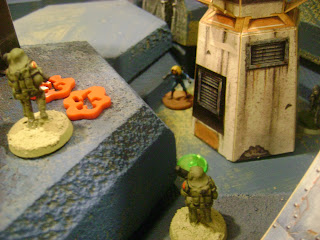 and at the very last second, Titus Philo and Dr. Xaden stop the countdown! 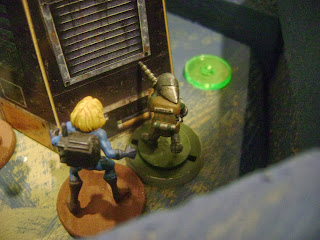 Mining Asteroid 318 is in the hands of 8 Ball.  Casualties were heavy, with both Dr Ourii and Sgt Mannesman wounded.  Follow on support units from the Kingdom of Colores arrive and begin to process a trove of intelligence.  This is the break 8 Ball has been working for, they have a name and a location of one of the Reichs' hidden enclaves:
The Haussen Arcologie
_________________________________________________________________
Some Notes
These Pulp Alley games keep getting more and more exciting.  I have never been a fan of scenarios that seem to be designed in such a way that everyone dogpiles in the middle, so that wasn't the way this game started.  But around the end of turn 1, my opponent and I sort of talked ourselves into the logic that the reactor was really the only thing that mattered (total destruction can focus the mind :) ). The excitement was aided by the fact that my guys were spread all over the asteroid, I hadn't deployed with just one objective in mind, so the rush to the middle was really suspenseful.  Also, lots of credit needs to be given to the game system.  Pulp Alley isn't a wargame (I'm a wargamer, so I have to keep reminding myself of that. Some people would also say I have to remind myself not to move my lips when I read.) It's an ADVENTURE game. The options, cards, initiative all interplay so well that even though the game ended in an area the size of a closet, it was a nailbiter all the way.  It looked like it was all over on turn 6, but then my guys captured a minor plot point and got the reward to drive the game into turn seven. Then, in turn 7, Dr. Xaden dodged and heath checked away from 6 shots as the bad guys tried to stop her from getting to the control panel AND THEN SHE DIDN'T COMPLETE THE CHALLENGE! With 1 more success needed from Cunning or Finesse, Titus was within move distance to try but as a shooter, he only had 1d6 in the right categories for the attempt.  Everything came down to a 50/50 die roll.
Luckily, I don't have to find a new cast...
_________________________________________________________________
I would like to welcome our SIX NEW FOLLOWERS!
Ironworker
Shelldrake
cheetor / Sho3box
E-P
spacecowsmith
Senyor Verd