Situation
ODECO Drilling maintains a mining complex in the asteroid belt of the nearby Boria System. Three days ago a distress call was received at the capital on New Cypress indicating that the facilities had come under attack. A reaction task force was immediately dispatched. It included Eight Ball Command as a landing team and Sub-Ambassador Sulla Tigh as an observer. As feared, when the task force arrived the action was long over and the facilities were destroyed.  We pick up the action as Maj Guiscard and Sub-Ambassador Tigh are landed at the main building of the complex to investigate… 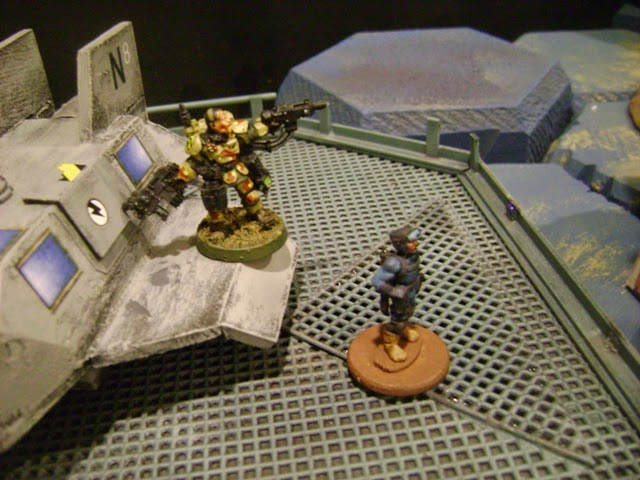 Sgt. Mannesman: Major, the team will be ready aboard the Dropship. Just give a call and we’ll come a runnin’ 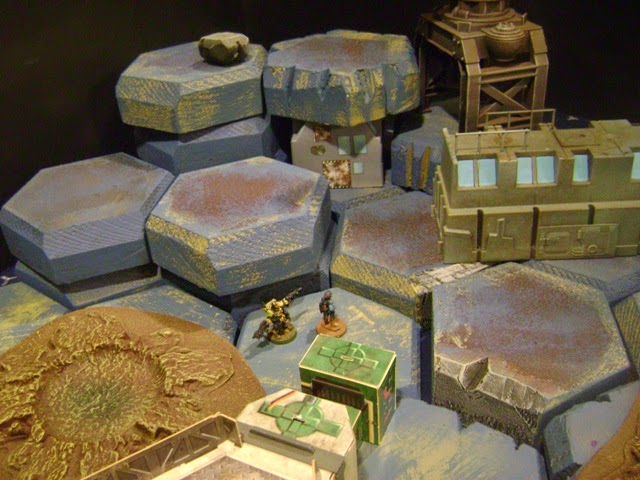 This will be the “I’ve Got You Now” Scenario from Pulp Alley. So, Maj Guscard and the Sub-Ambassador Tigh both start on the table totally surrounded. The Dropship will be classed as a Vehicle from the PA expansion

Turn 1
Reich Automs and unknown troops burst from cover and shots fly in all directions.
Maj. Guiscard: Eight Ball, Eight Ball, bring the team! We are under attack! 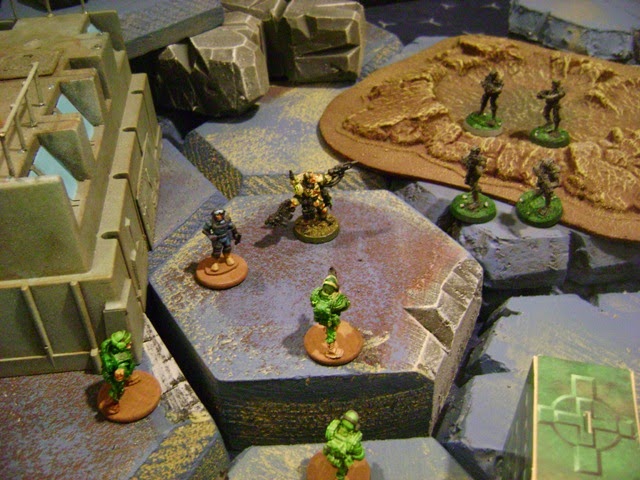 Turn 2
SA Tigh: What is that!
The “Unknown!” rises and joins the fray! 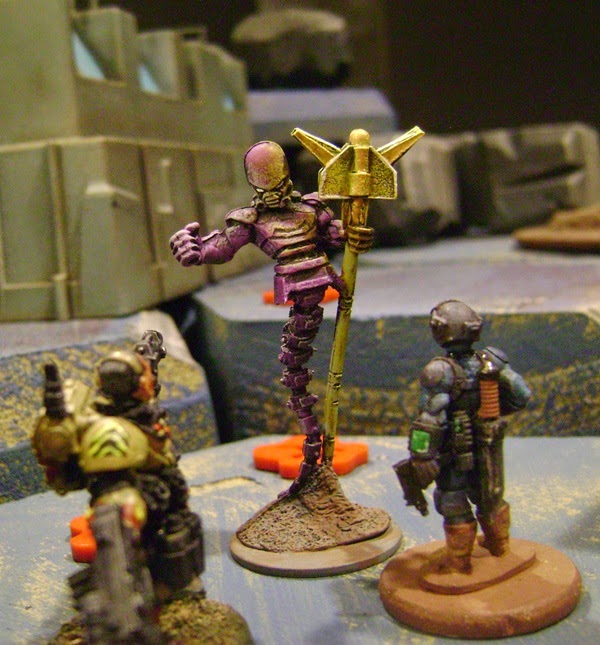 Eight Ball running to the rescue 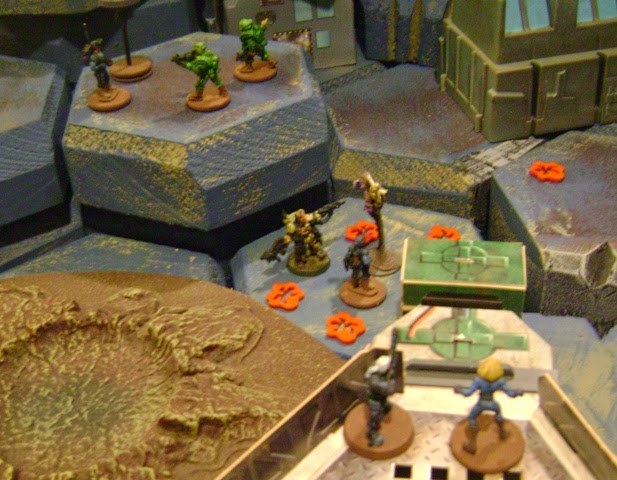 Turn 3
The Reich Troops may be no match for Maj Guiscard and SA Tigh, but the Unknown is ferocious. He is almost unstoppable, and the fight turns very one sided. 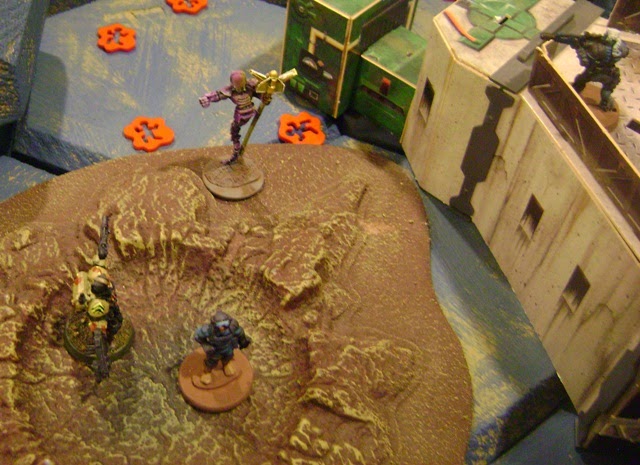 Maj Guiscard: Fall back to the Dropship! 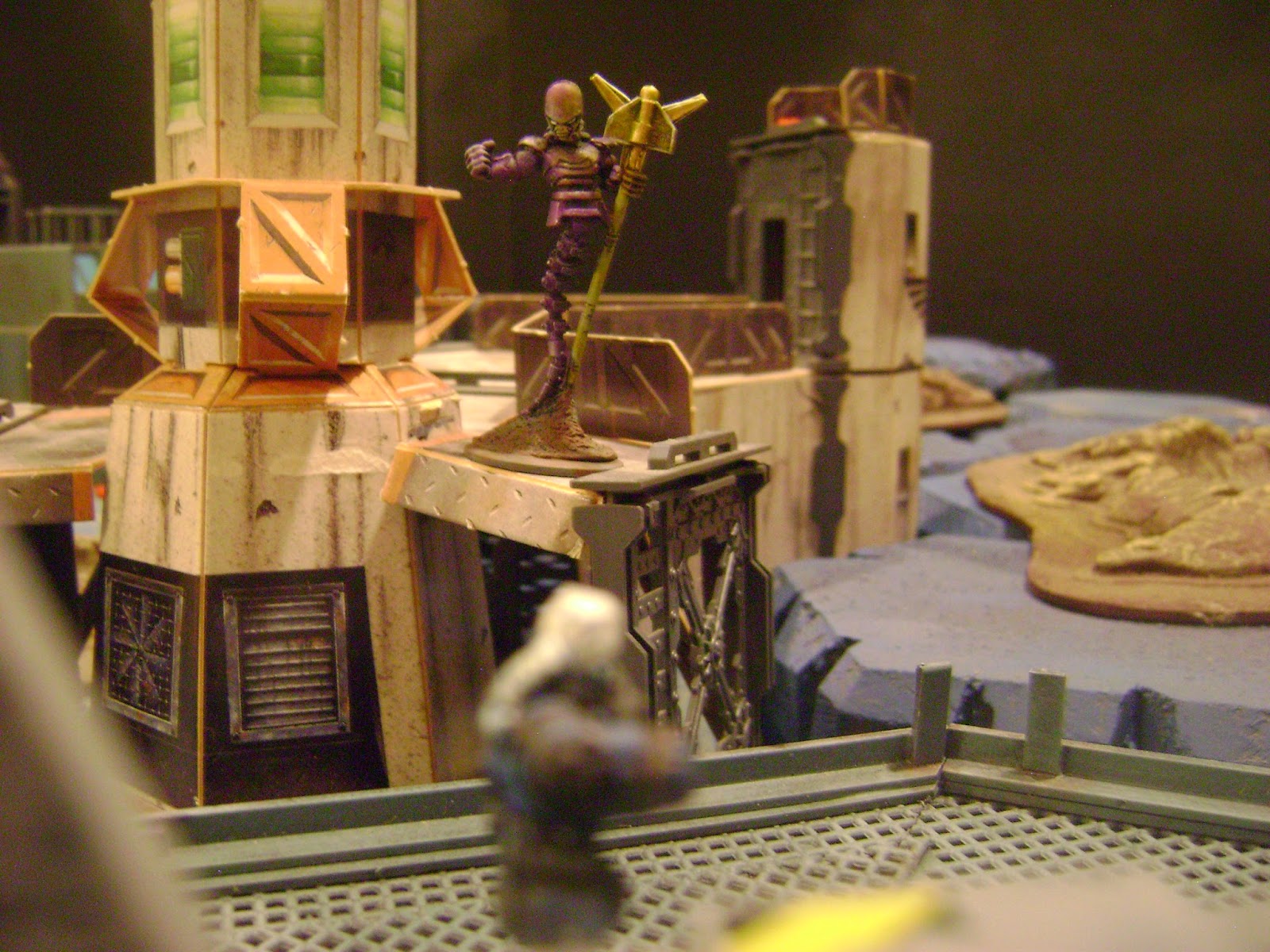 Later…
Aboard the Helena

Maj Guiscard: So, Sub-Ambassador, does THAT convince you that the Reich is violating the cease fire?

SA Tigh: Probably, but the real threat is twofold:
1. That was a prepared ambush. It was set up by someone who knew “I” was going to be there.
2. That creature. It seemed to be un-killable. I have never seen anything like it.

There is an Imperial agent, Inquisitor Verhoeven, who sent me a secret message from Krellborn IX.  His operation has encountered a being with similar characteristics, and more alarming, there is evidence connecting this formidable xenos to Canoness Quintilla. Considering this assassination attempt, that connection seems even more likely.

Adm. King: The KCS Passeraux with Ambassador Sophie has scheduled Krellborn IX for a diplomatic visit on its next stop.

SA Tigh: I will transfer over.  With the attention being on the Diplomatic functions, I should be able to secretly make contact with Inquisitor Verhoeven. We will gain information about that creature and find out if Quintilla has been involved.

Maj Guiscard: I will send a message to Ambassador Sophie and her team advising them of the situation, and to provide you any assistance you require.

SA Tigh: Major, I may not have my usual entourage, but I do not need the help of a team of diplomats.

Maj Guiscard: Oh, they won’t be offering diplomatic help.  They can bring a wide range of talents to a problem…