Background
The Kingdom of Colores has purchased an advanced warp engine and related parts from the Rex-Avis Trading Clan from the Tartarus Rim. This advanced technology originates from the Dwarf worlds, and as such is proscribed in Imperial Space.  Both Rex-Avis and Colores have taken every precaution to maintain the secrecy of the transaction, and the delivery of the warp engine is taking place in remote space at a secret Colores Facility.

As we pick up the story, most of the deal has been completed. However, the “Warp Space Imploder” is a high risk component of the engine, so the principals have traveled to an abandoned Imperial facility on a nearby moon for trials and final verification of the Imploder to complete their business.

The members of the Rex-Avis Clan and the scientific team from Colores have gotten along well, the transaction is going smoothly, and they are all looking forward to concluding the deal.

Agents of the 4th Reich have different plans.

Scenario
The game was a tryout for the “Void Pirates” ruleset.
The Colores/Rex-Avis Operatives are patrolling the perimeter and will be placed randomly.  The Reich Grenadiers will arrive from the North and East of the Map.

There are 3 objectives. The Reich will try to grab them and get onboard a getaway APC that will arrive to aid their escape: 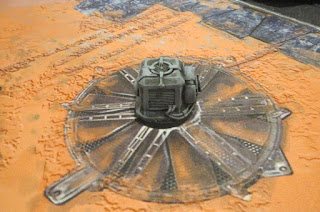 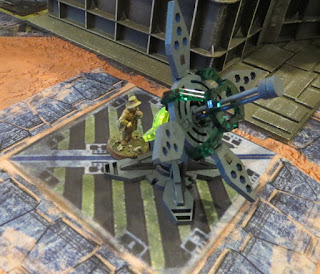 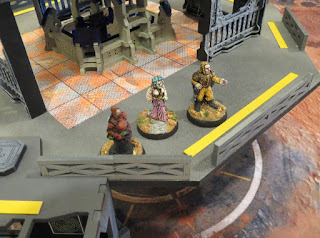 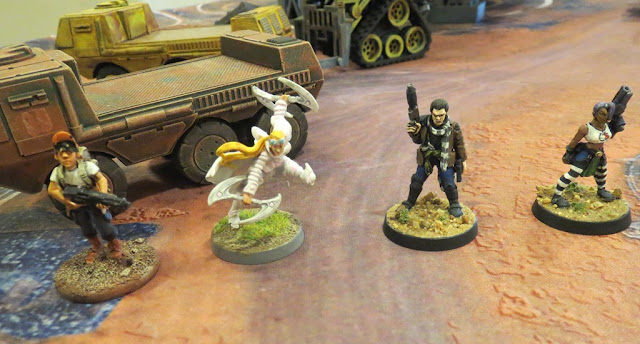 The Map
The objectives, the Imploder, Prof, Applebeck, and leaders of Rex-Avis are running the final tests to determine the state of the Warp Space Imploder.  They are scattered around an abandoned manufacturing facility when the 4th Reich makes an appearance. 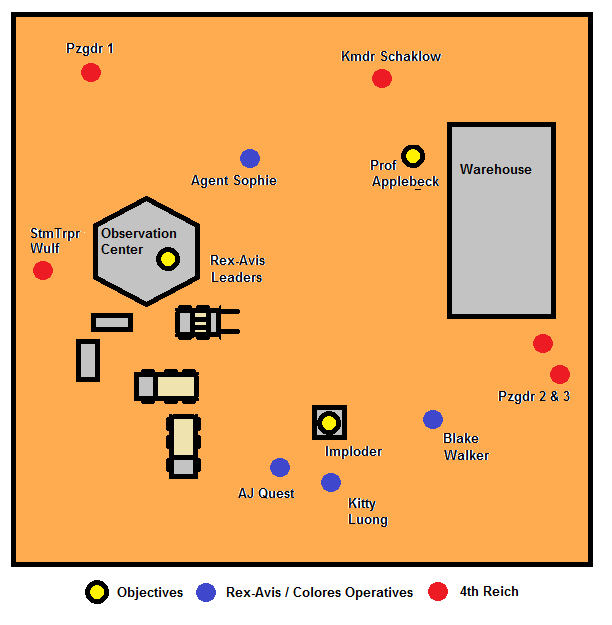 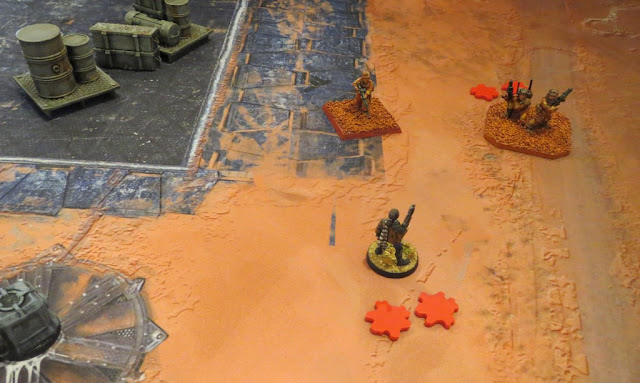 Blake faces off against 3 Grenadiers at almost point blank range.  Everyone is hit, but Kitty leaps in and turns the tide. 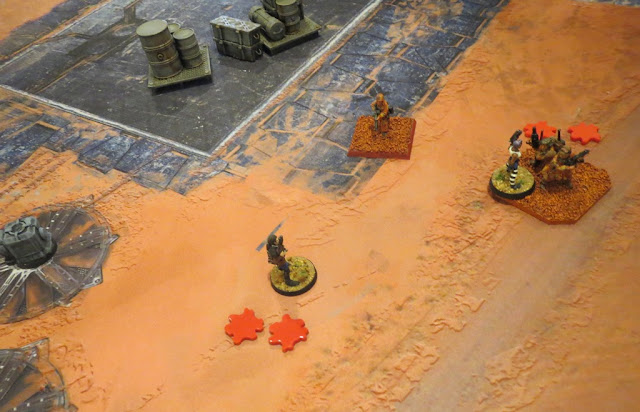 On the north side of the map, Agent Sophie squares off against Kmdr Schaklow, and although he gets the first shots in…
He cannot stand against the furious charge and goes down. 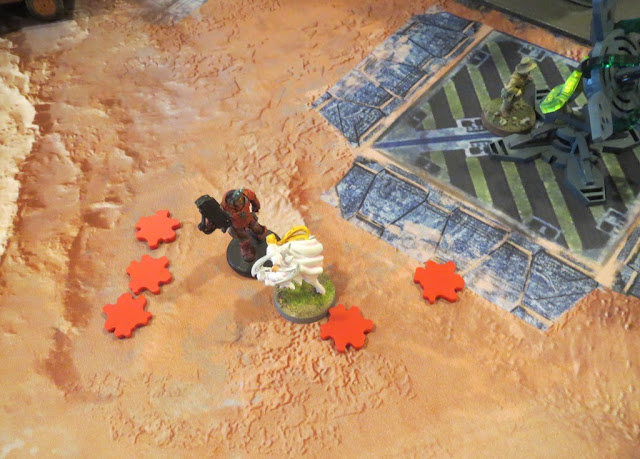 AJ Quest guns down UO Wulf, but all the maneuvering has opened a hole in the security screen.  One of the Grenadiers slips through and makes it onto the observation platform. 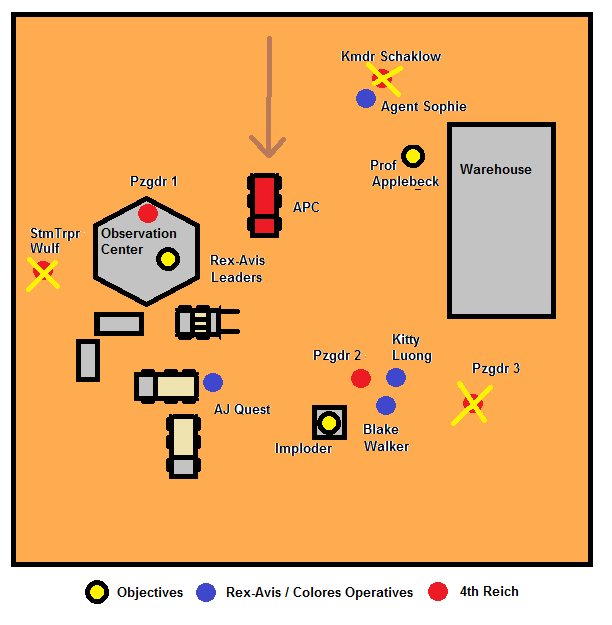 Agent Sophie’s aim is disrupted by the charging Reich APC getting to the base of the platform.

The Grenadier uses the Rex-Avis Leaders as human shields as he herds them toward the getaway APC, but AJ Quest climbs on top of a forklift (skillcheck!) for a better angle. 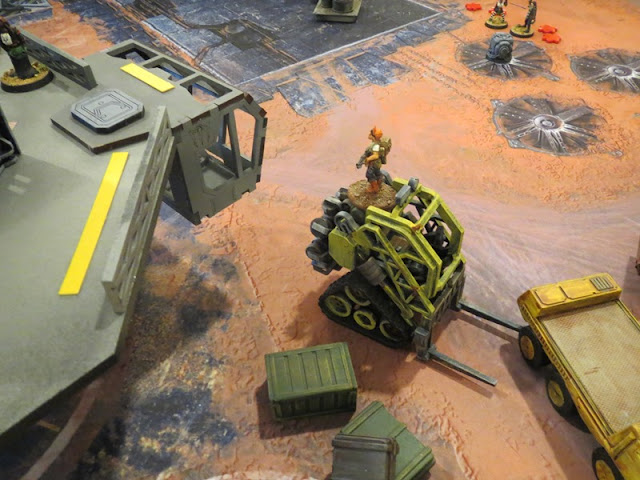 ...AJ takes the clutch shot and downs the Grenadier. 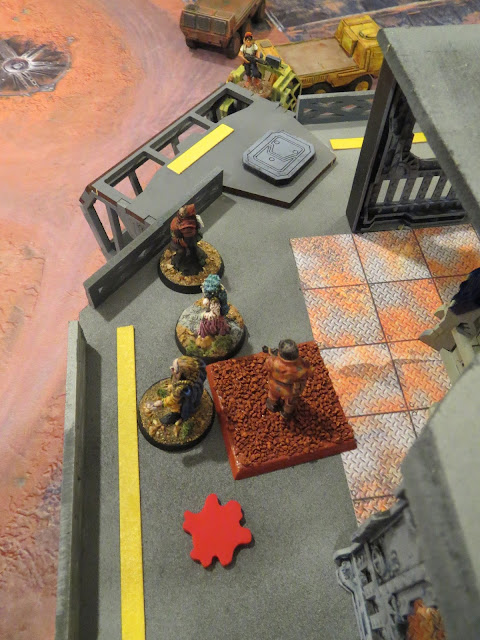 (Although, Colorado, Sir Stanley, and Olympia could use a change of clothes.)

Aftermath
Realizing that more powerful forces were certainly on their way, Colores and Rex-Avis decamped immediately.  The good news was that all were safe, and the Warp Imploder functioned perfectly.
The bad news is, that despite all their precautions, the secret's out.

So, this was delayed by the bright and shiny distraction of NEW RULES! I was over at Cheetor's cool blog, Cheetor's Blog, and he had a battle report using the "Void Pirates" rules.  I was so impressed that I bought and downloaded them immediately. After trying them out, I just had to rework this episode.

The rules are a lot of fun. A little too fiddly for my tastes, but it's easily fixed as everything is kind of "drop in", so you can sprinkle complexity to taste.  For comparison, think the SOBH family.  It plays fast, fun, and bloody. Opposed roles for combat keep both players  involved. I highly recommend Void Pirates (LINK: FOUR COLOR STUDIOS).

2 more missions over here, and then the action will shift over to the Tartarus Rim.