On the suggestion of airbornegrove, I purchased  the Donnybrook rules. They are in a word, fantastic. I have no interest in the pike and shot era, but after one read through the book, I was ready to collect up my matchlock and march off to shoot at the Civilian Mob. It is really great stuff.  However, for deep and personal reasons that absolutely no one cares about, my heart is set on Sci-Fi, so I began fiddling.
Observations

1. This might be skirmish level for the period written BUT…
in the batrep, these were the smallest armies (4 points) that could be chosen.
for a Sci-Fi (Oldhammer 40k) game, that looks like forces ready for battle to me.  OUTSTANDING!

2. The card driven turn system…
If used with the “Turn Over” card, the rules makes an Army list with distributed lethality much more attractive than an Army list built around one killer unit.

What I mean is, in 40k, the IGOUGO system ensures that if a player concentrates killing power into one unit, that killer unit gets to act every turn to full effect. Donnybrook’s card driven turn system removes that guarantee that any given unit will act in a timely manner. On a bad day, a unit will not act for a couple of turns (and conversely, some units seem to act over and over). Players are rewarded for distributing killing power among all units, so whichever cards come up, you can be dishing out the carnage. This appeals to me a lot.

3. Random Events…
Certainly the chart for this game adds to the battlefield chaos and to the narrative aspect I enjoy.

The base engine of the game plays fast: stuff blows up, crazy sh*t happens.  I was very reluctant to touch anything fundamental.  I really just worked in a few special rules around the edges for the genre and put in some rules for APC's and Tanks.

Disclaimer
These are choices made to suit my own preferences, and any other mods could be just as valid. I don’t know the authors (but I’d sure like to shake their hands), so I cannot claim any special insight. However, Clarence Harrison was kind enough to comment on the batrep, and his input, plus reading some of his own batreps and design notes, leads me to believe I lean toward a little more abstraction.

I don’t designate special or heavy weapons within a Unit.  Those are absorbed into a Unit's overall dice throw. I chose instead only to separate characteristics for Heavy Weapons in Units where they would be concentrated for a fire support role.

I started with with some basic infantry unit profiles:

…and worked everything else relative to that
There are no Armor Values or changes to game mechanics for shooting or attacking Vehicles.
The idea is that there is a basic Anti-Tank capability built into each Infantry Unit (this is the corollary to what I wrote above about abstracting a Unit's integral Heavy Weapons) and when firing at (or Assaulting) a Tank, the Infantry Unit is simply using these organic Anti-Tank weapons.
For example, when a Space Marine Unit throws its 4d10 against an enemy Tank, it’s not shooting bolters, it has a Missile Launcher and/or Anti-Tank grenades.

Tanks can move 12” normally and still fire, or can move 6” through difficult terrain and still fire. If moving through Difficult Terrain, a Tank must also make an Ability roll.  If the Tank rolls a 1, it fails to penetrate the obstacle and stops its movement at the edge (or fails to move if already in difficult terrain) until it's next activation.

Unless equipped with “Tank Close Combat Weapons”, Tanks can never Assault or Strike (or Strike Back) in Close Combat. Tanks can be Assaulted, and if any unsaved wounds are inflicted on the Tank, it loses the combat and must make a morale check.

A Unit that assaults a Tank is not locked in combat and can be targeted as normal.  A Tank may move out of contact with a Unit without penalty.

A Tank cannot move through an enemy unit, and the Tank’s path must stay 1” from an enemy unit’s table footprint.  If moving away from a unit that is in contact from an assault, the Tank must move a path that minimally violates the rule in the previous sentence.

Wounds
I didn’t want to add Armor Values, so instead I added “Wounds”.  A Tank has multiple “Wounds” and is fully functional until all wounds are gone, and then it is destroyed. After a couple of run throughs, 6 wounds combined with the Armored special rule (“Armored” as defined in the rulebook) for a Main Battle Tank seems a good combination. If you wanted to represent a Light Tank, or some other less robust Vehicle simply lower the Wounds and/or take away the "Armored" special rule.

Heavy Weapons
In the Donnybrook Rules, there are no blast templates just a dice roll for how many figures could be hit.  Sooooo how to model a Tank’s or other Heavy Weapons into a unified attack?

When firing, a Unit equipped with Heavy Weapons rolls 2 Sustained Fire Dice. The total result is the number of Ability Dice rolled to hit against the target.  Additionally, when executing a shooting attack, the unit’s Ability Dice are upgraded one die type (to a max type of D10) due to the power of the weapons employed. If a jam marker is rolled, that die cannot be used again until the “Reload” card is drawn from the deck. Range 36”

An infantry Unit (called a Battery) can be given the Heavy Weapons special rule with the following additional rules:
1. The Battery cannot move and fire
2. Whatever the total model count for the Battery, two of the models should be modeled with Heavy Weapons (Heavy Bolters, Auto-Cannons, whatever).  Each Weapon rolls a Sustained Fire Die for firing.
3. The Unit has no other firing weapons. No double dipping.  Additional figures standing around with rifles are just wound markers for shooting purposes.
3. At least one figure is needed to man each weapon, so if the Battery is reduced to one figure, only one Sustained Fire Dice is rolled.
4. The Battery cannot Assault, but if Assaulted, eligible soldiers can strike back

Tank Close Combat Weapons
This can be any type of close combat weapon, from giant robots with mighty swords to explosive belts or massive electrical charges on the hull.  The tank may initiate or participate in an assault following the standard process in the rulebook. The Tank Unit uses its Ability die type and throws the number of dice associated to that type. Meaning: 12D6, 8D8, or 4D10.  The number of dice thrown is not reduced by wounds taken. A Tank throws the full number of dice until destroyed or it routs from the field.

IMPORTANT
I depart from usual convention on how a Mechanized Infantry Unit is depicted on the table. There is no “mounted” or “dismounted” designation. A Mechanized Infantry Unit is trained to work with their vehicle. They are aboard when needed, and dismount when needed.  On the table, the infantry are placed as if a regular infantry unit, and their APC is placed anywhere conveniently nearby. The vehicle itself is treated like a status counter. Purely an indicator that the unit is equipped with extra mobility, it has no effect other than to confer the “Mechanized” designation. The APC should be re-positioned if it obstructs  firing, an assault, the destination of another moving unit, or any other gameplay.

Jump Packs
As a guide, a unit with this rule behaves almost like Cavalry in the rulebook. An Infantry Unit equipped with Jump Packs can move 12”, but is reduced in model count.
D6 Quality = 9 Figures
D8 Quality = 6 Figures
D10 Quality = 3 Figures
1. Characters created from this Unit during Army construction are also equipped with a Jump Pack. Characters that later “attach” themselves to the Unit are not equipped with a Jump Pack.
2. Units may leap over difficult or impassible terrain without penalty.
3. If a Unit moves 6” or less, it treats rough terrain just like any other Infantry Unit. If the Unit moves over 6” and ends its move in rough terrain, an Ability die is rolled for each figure in the Unit.  On rolls of a 1, a figure becomes a casualty and Characters must roll on the Character Wound Chart.

I’m gonna play about 50 games with my “OFFICIALLY OFFICIAL SUPREME EXPERT RULES EVALUATOR”, also known as my son Robert. He is a big fan of the “Grey Knights” and currently building ORKS. So, I’m sure some thoughts about Psychic Powers, what does a “WARGH!” mean in Donnybrook, and crazy Ork contraptions will be forthcoming.

Again, these rules hit my gaming sweet spot for detail vs abstraction, and I’m sure everyone leans a little more than me either to one side or the other so take them as suggestions. Constructive discussion is welcomed.

Here are some sample profiles we’ve been using: 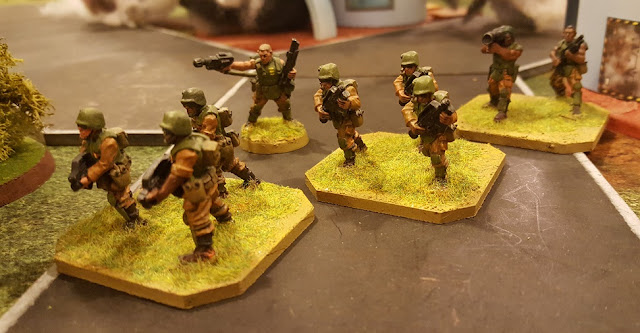 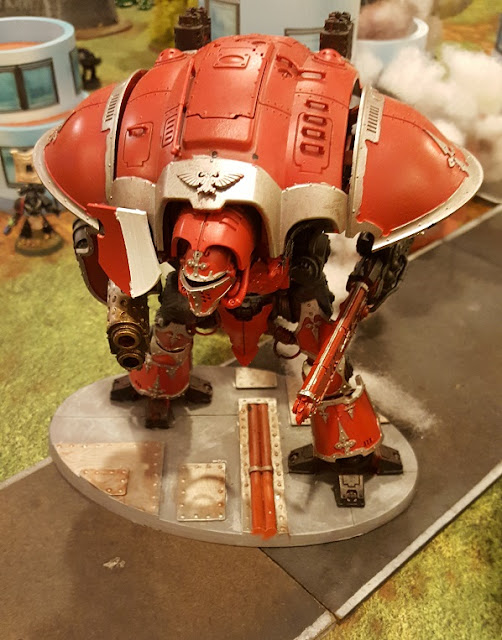 Eight Ball
D10
Special Rules - None
...actually, they spend their upgrade to create the special Character below 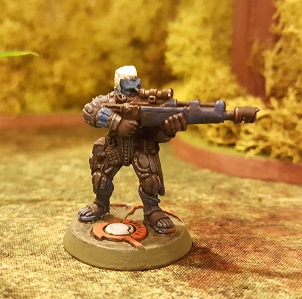 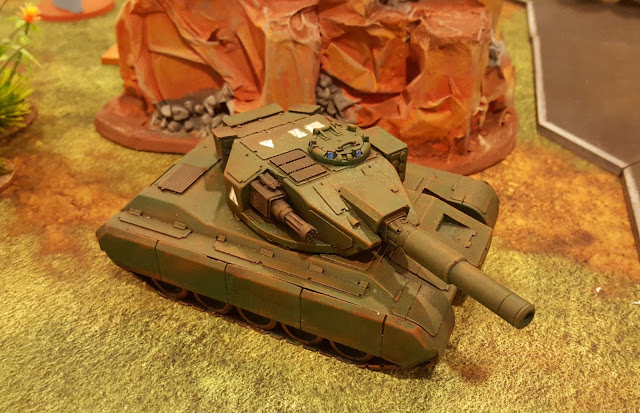