Last weekend my son and I went to Wargamescon in Austin, Texas. We played in the Narrative Event put on by "The Narrative Guys" (TNG) and I have to say I am just as blown away as I was the first time we participated in 2016. 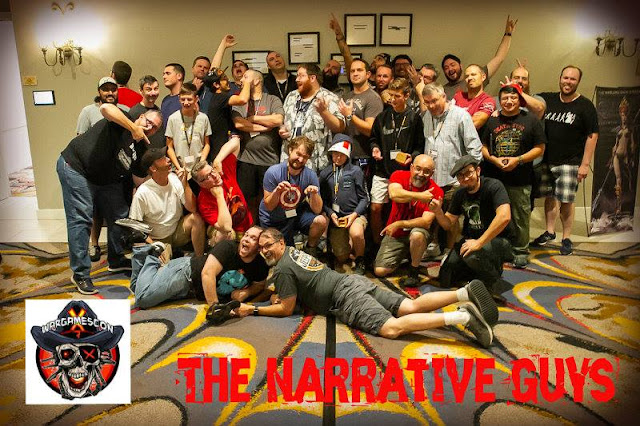 Here is "the Narrative Guys" own coverage of this year's event, Link: HERE.
and here is my original after action post from 2016: Link HERE.

I cannot believe we had to skip this last year!  It is just so unbelievably awesome.

TNG continue to evolve their approach and the mechanics were substantially different this time from our last visit. Essentially, each player filled out a Battalion Detachment. Then each mission had an org chart that defined the power level and a particular configuration of the force org to be chosen. So each mission you customized the force.

TNG suggests putting each unit of your battalion on an index card for quick force construction. For example, here is mine for Day 1, Game 2: 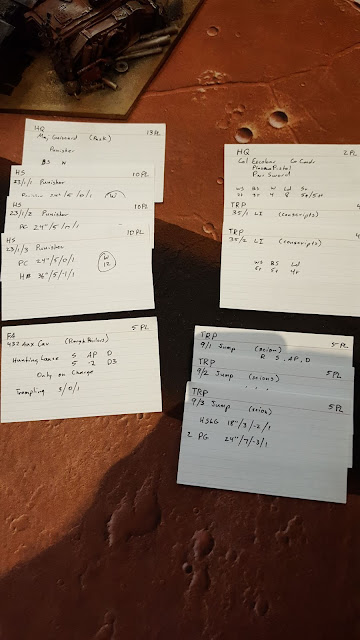 The missions have their own particular deployments and objectives, but loosely stated, the first mission is of a lower power level, like 30 and is a recon/first encounter. The results have an impact on the rules, objectives and/or deployment of the second mission.

The second mission is pretty much an apoc battle with higher power levels and decides the "winner" of the storyline, with the 3rd mission of the day being smaller, and focused on the individual fates of your force and characters in the aftermath.

From a "playing" standpoint, I loved it. First battle is a "get to know ya'" with your opponents before you fight a big high stakes slugfest, and then at the end of the day, when you are tired and spent from the ups and downs of a big fight, the smaller size and lower stakes of the 3rd mission are a welcome come down.

Location: Delmar V
Background: Delmar V has been invaded by Orks under the Warboss Gulgamak. A relief force of Grey Knights, Ultramarines, and Imperial Guard has been tasked with executing a counter offensive and saving the planet.

After dropping in at 0230 hrs local time, Col Escobar and his 35th Light Infantry advanced to the edge of the small airfield marked "Athens 4" on his map. Combined with the barracks (that the local PDF abandoned without a fight), it was good open ground for the mass landing scheduled for 1500 hours.
His boys just had to take it. Orks were not going to make it easy. 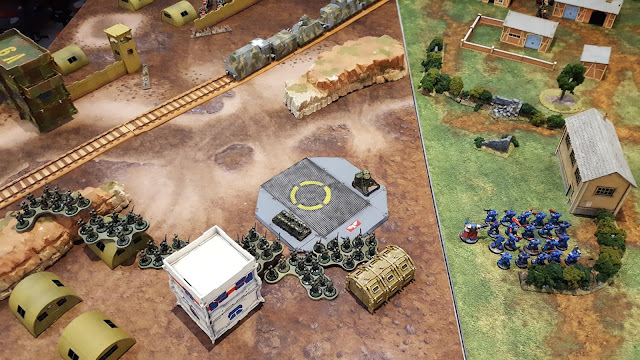 With Ultramarines on the right, the Marine Captain would be using that terrain to block any Ork attack from that direction. 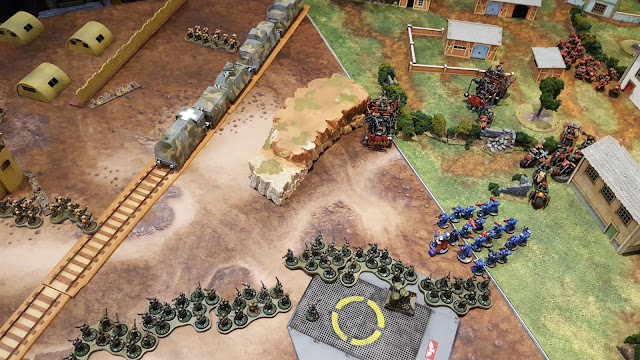 Sure enough, the counter attack bored in from the NE. The fighting was bitter, but the power armor of the Ultramarines was stout and the deft tactical hand of Col Escobar ordering the 35th to maximize its firepower (with up to a massive 240 shots) carried the day. 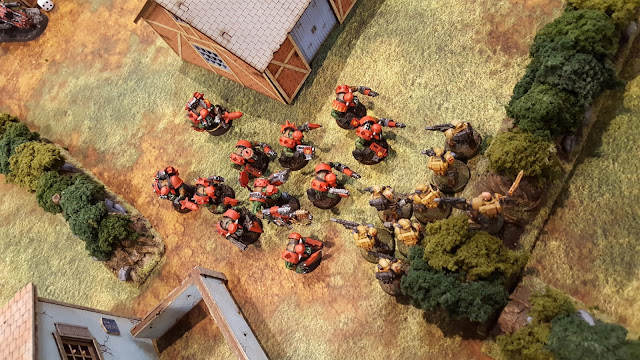 The day's only mishap occurred when a unit of the 9th Jump Inf tried to block a mob of  Orks breaking out of encirclement. There were no survivors.

High Command has directed the combined Imperial Force to encircle and place the Ork fortress under siege. However, the advance far outran the logistics train.  To deal with this new rapid pace, High Command directed that precious and vital supplies be dropped in the path of advance. Unfortunately, the supplies were now in close proximity to the Orks as well. If the troops can get to them first,the Ork threat will be contained, if not, Imperials will be facing a massive Ork horde while low on ammunition.

It would be inevitable that the Imperials would face a long retreat and the Orks establish a foothold on this world. 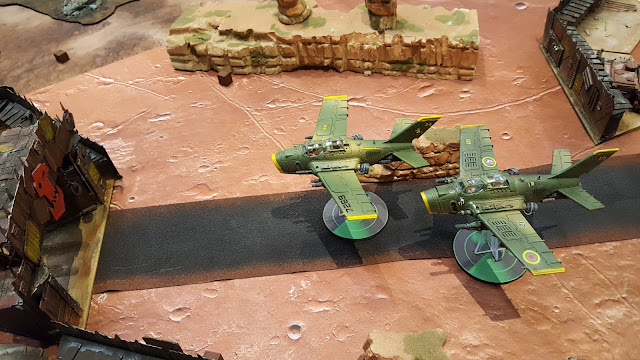 In a rare appearance, the Imperial Navy does a flyby of the massive Ork stronghold and gives our spearhead advanced intelligence of the Ork dispositions. 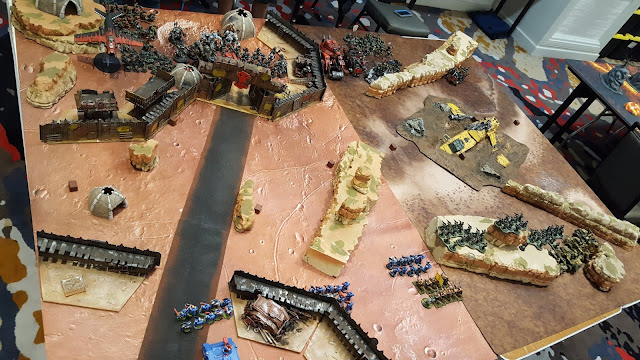 Not that it seemed to make any difference... 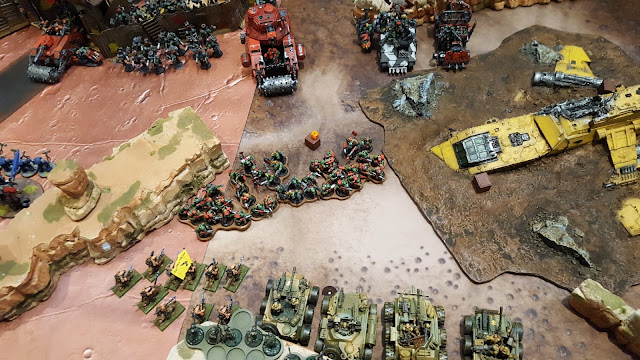 Our troops were slow off the mark, and combined with the relative distance, our supplies were destroyed by the Ork mobs long before they could be retrieved.

Mission 3: Contain the Thread and Attrit the Enemy Forces
With the Orks firmly established, all that could be accomplished was to contain the threat for the time being, and hope for reinforcements. Col Escobar and his 35th were tasked with destroying as many Ork mobs as possible and maintain a force in being in the local area. 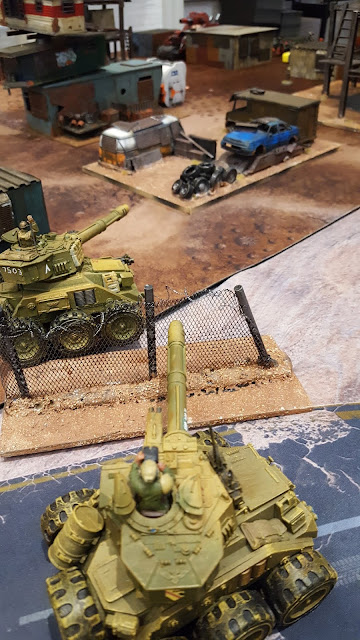 As the mobs streamed by, the success of the mission came down to a tank duel between a battlewagon and 2 Vanquishers of the 23rd Cav. 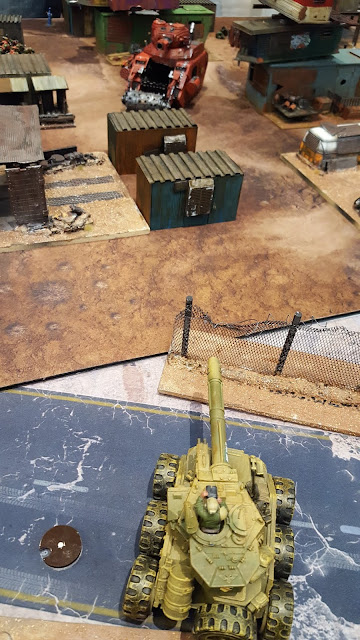 As the battlewagon closed the range, one vanquisher was taken out by supporting units, and the other Vanquisher was damaged. 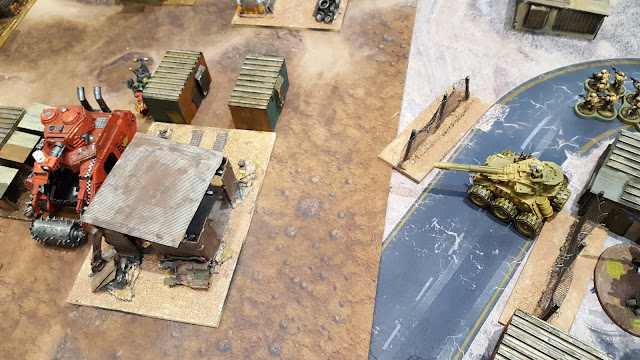 At the end, the last shots came down to being able to hit the battlewagon while obscured.  The damaged Vanquisher managed to catastrophically hit the tank and destroy it. The Orks were firmly established, but at least for now, the planet was not written off by high command.

Background:
The Inquisition has uncovered a Chaos infestation on Mirach II. A Task Force of Grey Knights, Sisters of Battle, and Imperial Guard have been assembled and deployed to the planet.

True to form, the enemy is trying to collect powerful relics and use them in a ritual to open a portal into the warp. If they succeed, uncountable demons will pour through and all of Mirach II will be lost.

Mission 1: Relics for the Ritual
Col. Escobar and a contingent from the 35th Light Infantry and 9th Jump Infantry have been rushed to an outer settlement. The Inquisition has detected a relic, but it's precise location is not known. Col. Escobar and his men are tasked with finding the relic first and keeping it out of the hands of the enemy. 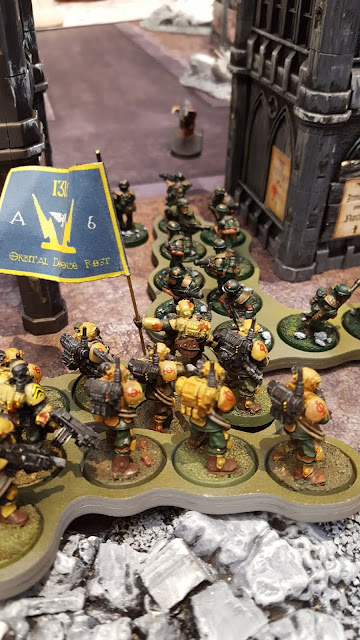 Very luckily, the relic was quickly located by the 35th LI and a defensive perimeter was established. 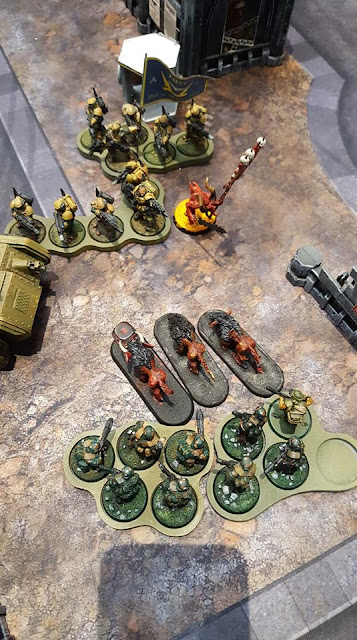 A final desperate assault was outflanked and the enemy was deprived of the object.

Although the Chaos forces collected few relics for their attempt at a warp breach, they had enough. Provided they could have an extended amount of uninterrupted time for the needed extra incantations....
...they were about to be interrupted.. 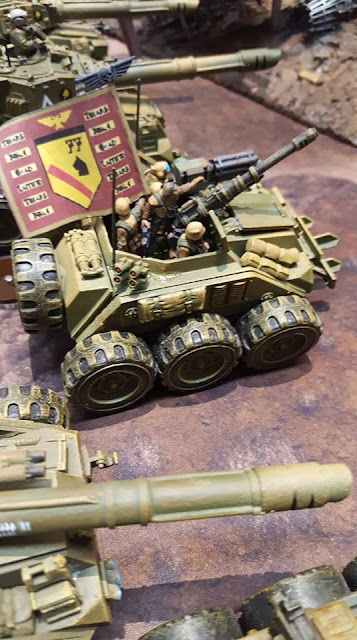 Maj. Guiscard brought the armored vehicles of the 23rd Cav with the 35th LI riding on top onto the plain. As soon as the enemy was sighted the 35th dismounted and assembled just behind the gun line. The Sisters of Battle deployed to the left, and the enigmatic Grey Knights waited in orbit. 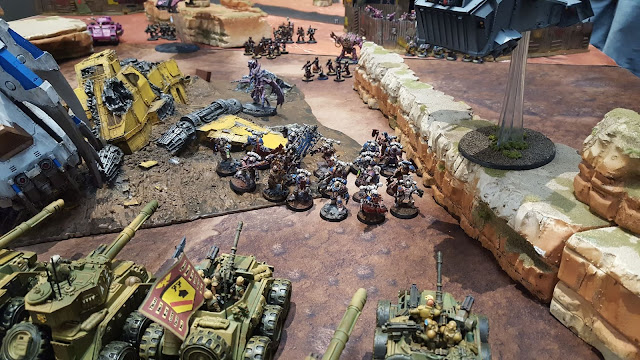 The enemy reacted with fury (I mean, we did just kick open the door to their church and piss on the floor). A massive drop pod landed in the midst of the Imperial troops and disgorged countless Plague Marines. Shots from uncountable lascannons flew in from all directions.

In the wild melee 2 tanks were lost, and all of them took heavy damage, but the Plague Marines were completely shot down. There were a lot of casualties, but like a prizefighter that can sometimes take a savage beating, then roll their stance and come back swinging hard, 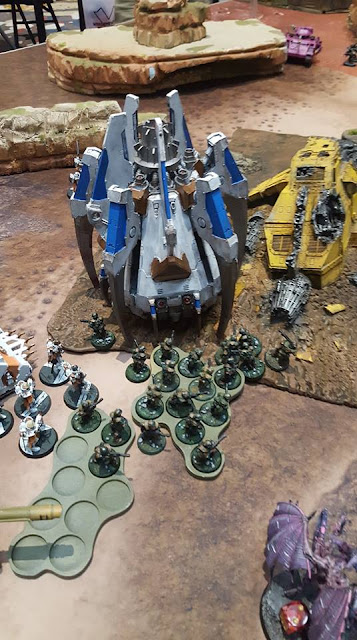 the tanks of the 23rd fell back, and the 35th Light Infantry CHARGED!

The 35th didn't have a lot of firepower, but they had guts... 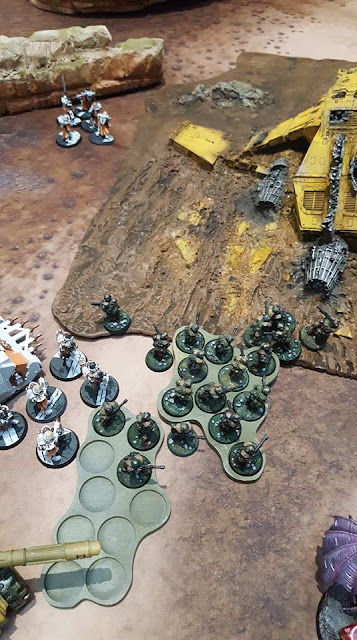 So, rolling with their momentum, they pivoted .... 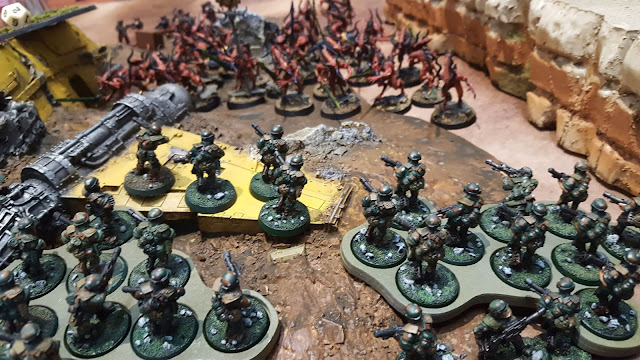 With all the attention on the Guard (and the Sisters, to be fair), the Grey Knights executed a perfect Deep Strike attack behind the main Chaos forces onto the lightly defended altars of the cursed ritual.

The energies dissipated as the altars and demonic acolytes were destroyed and Mirach II was saved.

With their plans in ruins, Chaos forces began suicidal attacks on the populace. Elements of the 35th were dispatched to the Prelate's compound to try and curb the destruction. 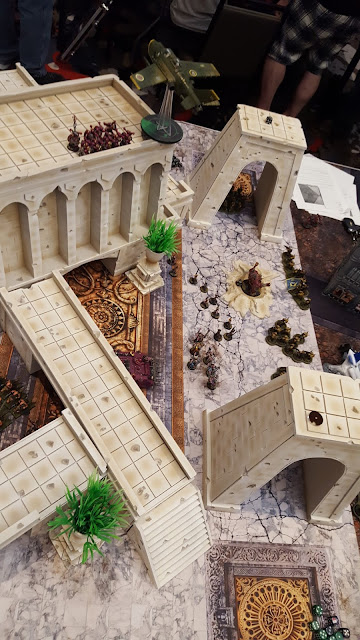 Wow, that was awesome. I couldn't have asked for better opponents, and I hope my meagre collection of pics at least gives some sense of the action. 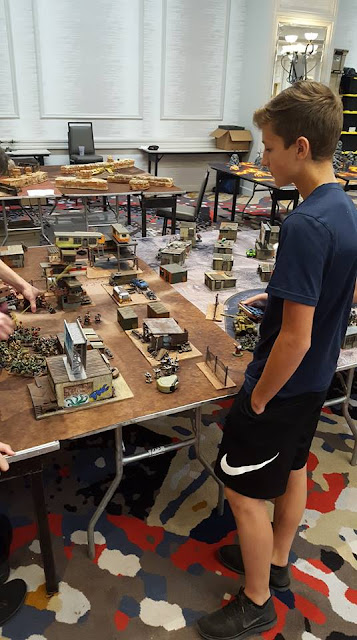 I had a great time with my son, and as parents, we all know how invaluable that is.

..and I earned my badge of honor for the weekend for putting a beverage on one of the gaming mats: 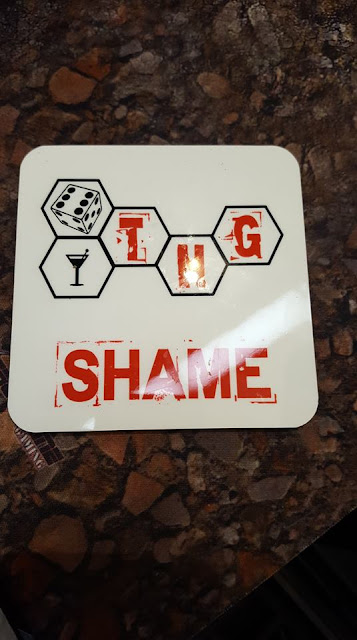 Thanks for looking!
Labels: The Narrative Guys TNG