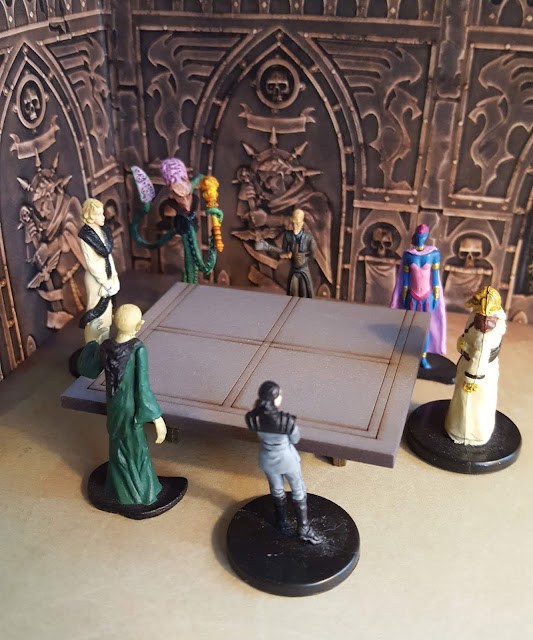 Furvus Lepantio, Timtai League Primary
Gentlebeings, as you are aware, we have lost our main Opportunity near Graveskul. (Link: HERE) This has created an unacceptable dip in revenues and our factors have demanded action.

League Custodian
Primary, if I may, I have anticipated this crisis and moved proactively.  I have received information about a transaction between agents of our rival house, 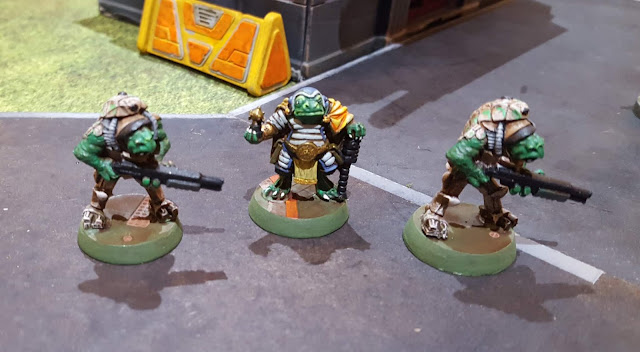 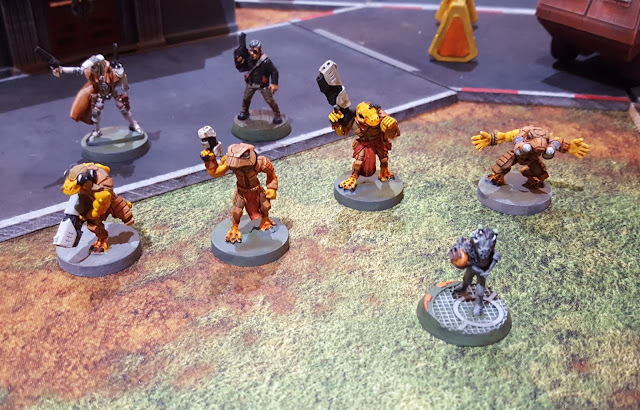 and the criminal enterprise, the Archuleta Brothers.

It seems that the Archuletas are providing an enormous amount of cash for a crate of Teleportium.
The transaction will be completed at a remote landing field in the Sachines. 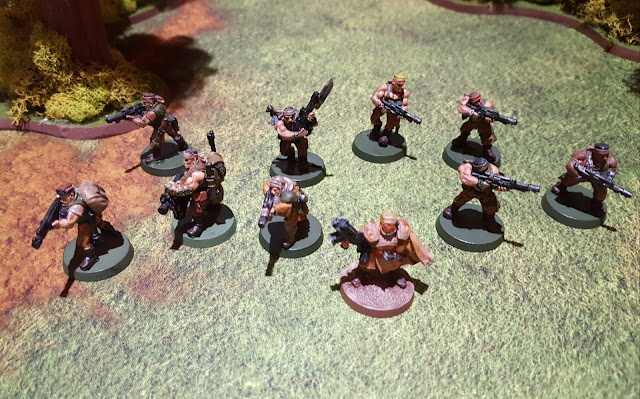 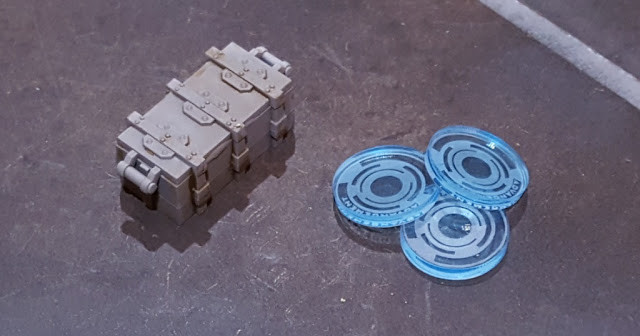 We will acquire both the merchandise and payment. 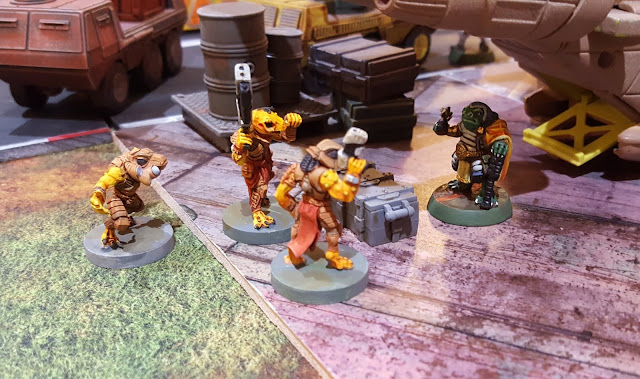 The Archuleta Brothers and Trader Mir Stilio of the Volantes Tigris Combine have met to conclude their business.  All that stands between Stilio and a record breaking profit in this system for Volantes Tigris is the end of this meeting.

At first glance, security for the exchange seems well deployed, but there is a lot of cover to the east and southwest of the landing field. 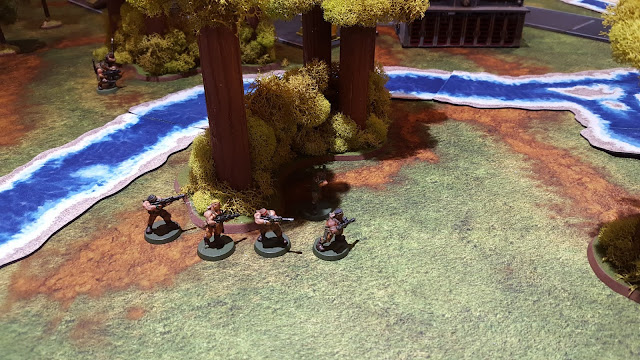 Captain Kahbar acting for the Timtai, deploys 2 teams in the cover to the east 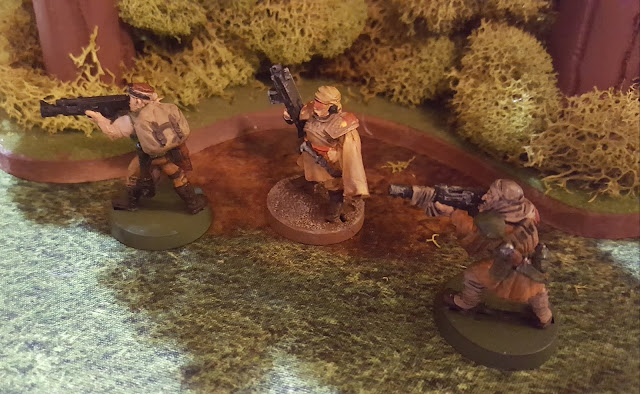 and conceals himself with 2 gunmen in the trees to the southwest. 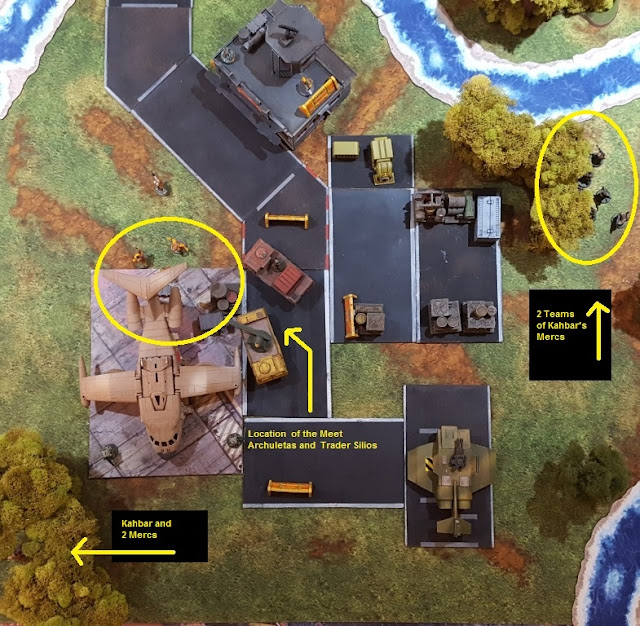 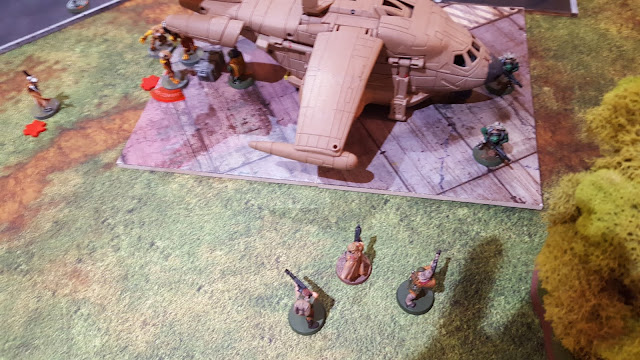 They choose their moment, and Kahbar orders his men to the attack. 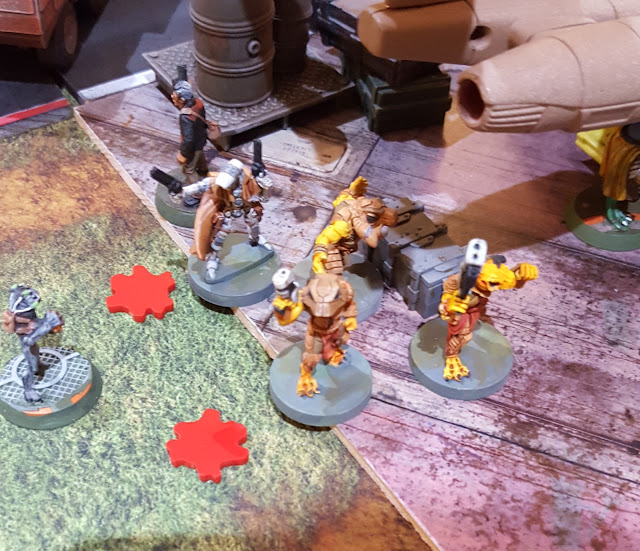 At the first volley, the Archuletas and their henchmen get hit hard and take wounds, but shockingly, no one goes down. 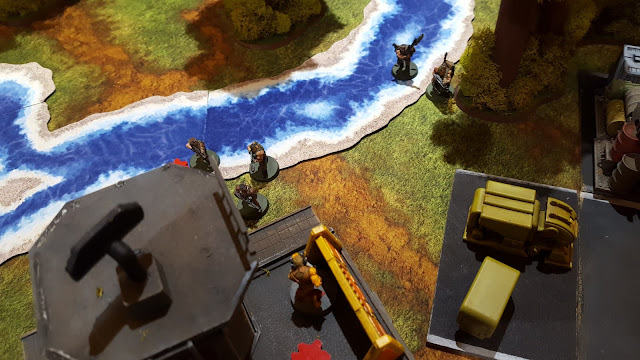 On the west, the Kahbar's men blast away at the sentries on the terminal building and quickly take the building in a rush 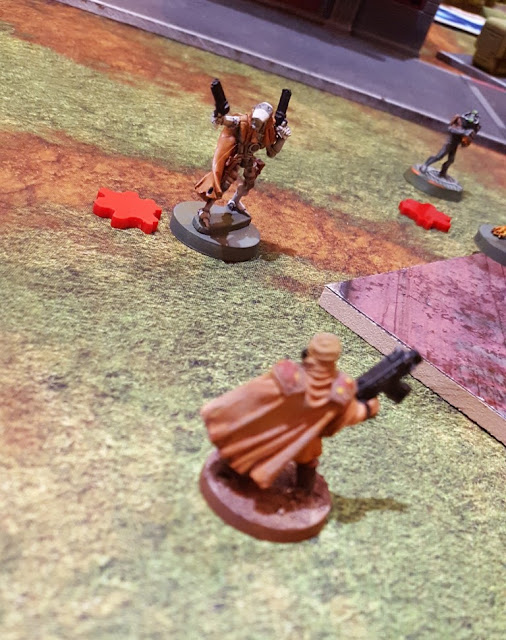 Captain Kahbar moves to the exchange, 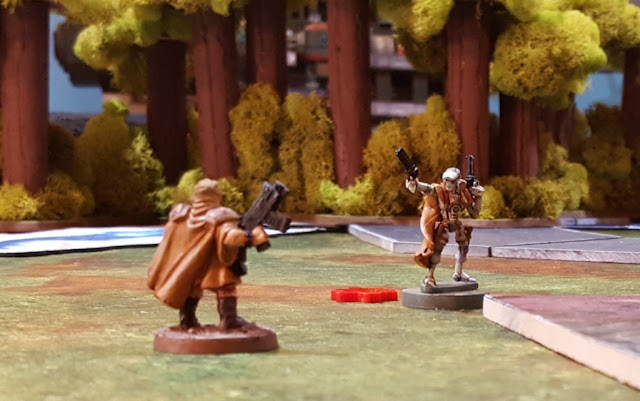 and the infamous robot gunman Red Eyes, working for the Archulettas, steps out to get a clear shot at Kahbar 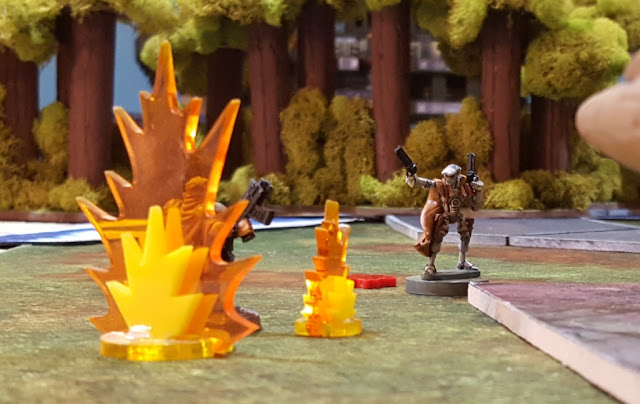 ...and takes him down. This is the first good news for the Brothers. 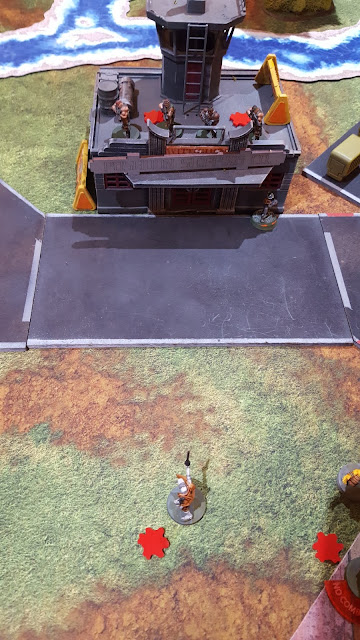 Khabar's men set up on the roof, and get Red Eyes in a crossfire.

But Red Eyes stands firm, trading shots in both directions. 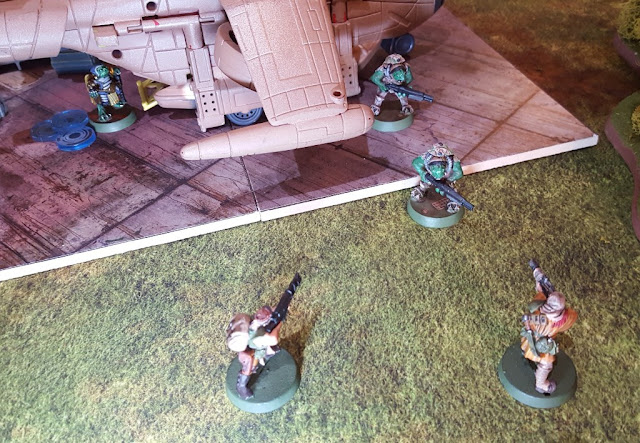 Mir Stilio orders his Voltanis bodyguards to assault the attackers to the southwest, and dives into his shuttle with the cash. 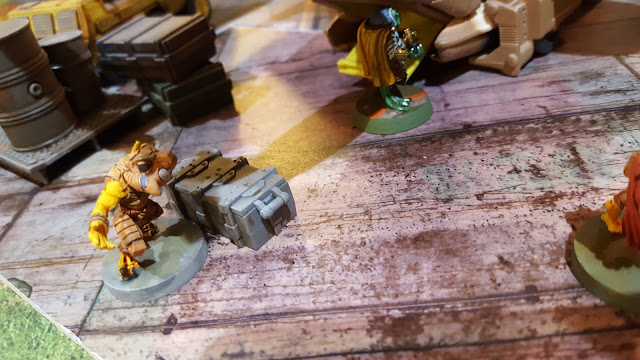 Meanwhile, among all the gunfire, Leaper (the Archuleta's teleporter) consumes enough Teleportium to get them clear. 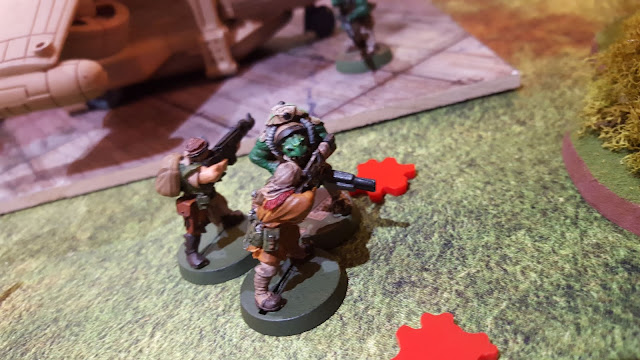 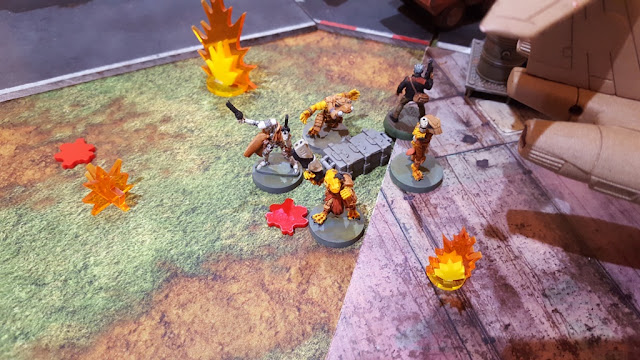 The air crackles and then... 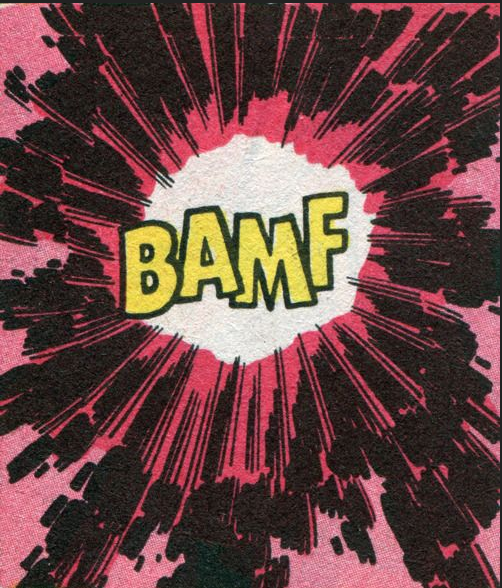 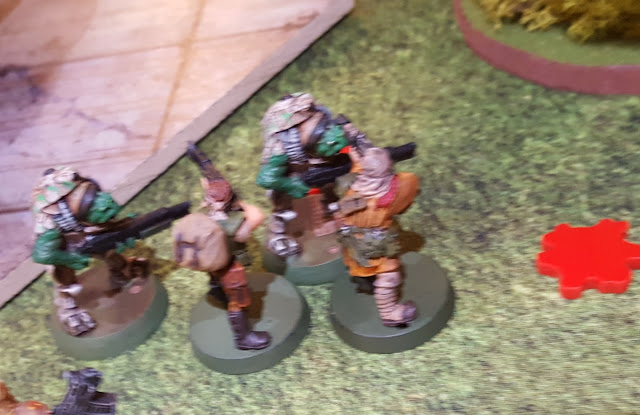 I wanted to do a short campaign using Kill Team playing out a fight between two Trading Houses. Of course this will be dependent of my vision of what is a “Trading Houses” and the type of resources one would have available for a war.

I envision that even though these are huge and ancient stellar spanning entities, it’s all about profit, and thus while their freighters would have enough weaponry to protect themselves against opportunistic pirates, extensive armed forces are not available. The forces would be small low to mid quality security forces and then once the shooting started, these would be supplemented by whoever the Houses could quickly hire.