Painting Over the Holidays

It seems like every time I get a very rare week or so of vacation, I hit the painting table hard. Here are some things I completed over the holidays. This is just the infantry and doesn't include a truckton of Spaceships that I'll cover in the next post along with future plans.

Some Naval Crew From GW

These are from the Rogue Trader expansion to Kill Team. I like the figures, but I have to say they have more detail than I prefer. They took forever to complete. They will be useful in Sector Six posts, and there are 2 poses that are neutral enough to act as bodyguards for VIP's in future episodes. 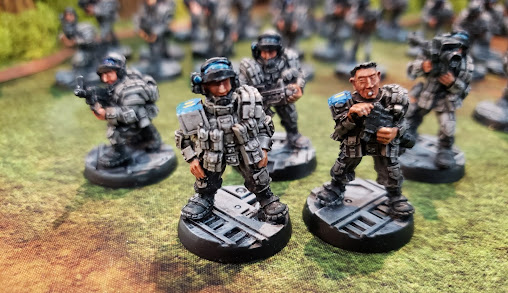 I see these guys being used on any given side of a Sector Six episode as needed.

Not Sector Six related, but I have started a new campaign of Rangers of Shadow Deep with a couple of new gaming buddies, and the campaign requires some of these baddies.

I'd like to share that there's a sentimental component to painting these figures. Way back in the 80's with my friends who first introduced me to D&D, our DM, oddly, had about 2 dozen Gnolls as his generic bad guys (instead of Orcs like in all the magazines and sourcebooks). We fought those bastards off and on for the next 5 years until we all left for college.

I know these are new (and much more detailed) Gnolls, but I have to say, I'm looking forward to laying waste to my old nemeses again after all this time. :)