Meanwhile, Back at the Mining Colony...

I was stuck on how to represent the Mining Colony on the tabletop.  For the space battle, I used a model of the Bespin Gas mine, but for the upcoming ground action, I didn't have a suitable set of terrain.  Then I remembered the old Saturday morning serials Space Academy/Jason of Star Command that utilized structures built into an asteroid motif.  It was an idea also used in the opening missions of the original Starcraft video game.  Using those concepts as inspiration, I took some foam mountains I had saved of the model RR that had to be torn up, plus I had some "martian" themed pieces from an old project. While not a perfect match, I think it came together pretty well.  I can't wait to fight it out.
_______________________________________________________

Our story so far:
A few weeks earlier (see the post "Naval Operations Commence"), a Naval Squadron of the Kingdom of Colores (KC) opened fire on an Imperial cruiser that was in violation of KC territorial space.  The Imperium brooks no resistance, so in retailiation, Imperial forces seized Xeres Corporation Mining Outpost 427 that belonged to the KC and demanded reparations.  Astoundingly, KC ships attacked and drove off the Imperial covering squadron, (See post "Going on the Offensive").  Imperial Battalion 4399 is now stranded, but firmly in control of the mine.
_______
"Commander Bruskin?"
"Yes Major?" 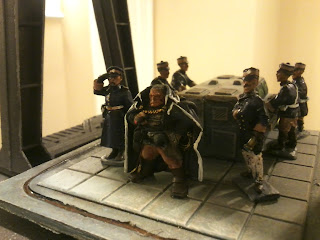 "The Imperial Navy has replied that they do not see a relief operation feasible for at least 45 days.  So, should we re-open negotiations with the enemy?"
"No Major, we still hold the population of this mining station as hostages. They will not dare attack.  Those troopships just off the landing pad are a bluff.  We will wait....

The miners and their families will just have to skip a few meals until our Navy can get moving." 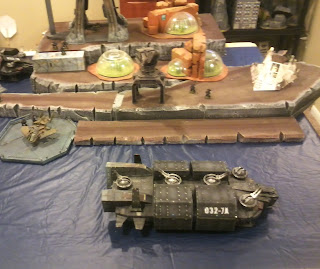