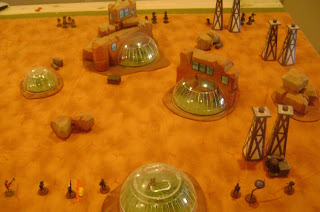 Hi All,
First, I would like to welcome the newest scholars researching the niche field of "Conflicts in Sector Six", Rob Hingley and Maj. Diz Aster.  I think 19 followers puts us past the number of people studying "Ivy League Grad School Attendess from LSU", so we have that going for us....

Last Episode, the Governor General received a list of recently abandoned Imperial facilities.  After consulting with his intelligence staff, a small anchorage on the planet Sachines looked like the most likely target to have some valuable hardware, but most importantly, that very fact would be bait to draw in forces of the 4th Reich.

8 Ball Command is dispatched with the following objectives:
1. Recover any valuable Imperial technology
2. Stop the Reich from doing the same
3. If forces of the Reich are present, acquire information on their hidden enclaves by any means necessary 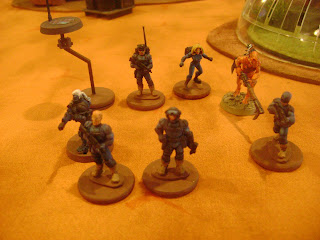 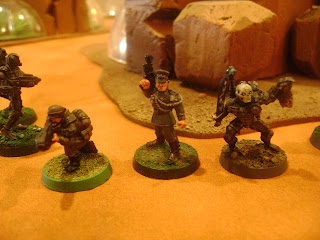 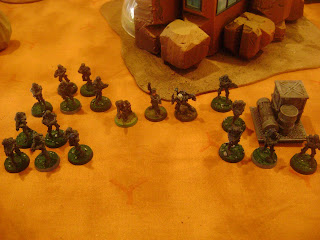 The orbital scans show a jump core is on site, (major plot point) and clearly the Imperials left in a hurry, there are data drops and inventory lists for the entire sector (minor plot points) available. Capturing one of the 3 humans on the Nazi side is an opportunity (minor plot point) for 8 Ball. 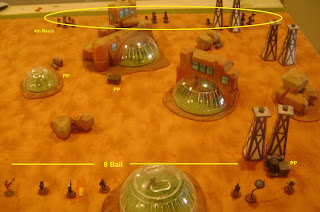 Before anyone even moves, Sgt. Q'Taupa is taken out by a long range shot (Unseen Peril). 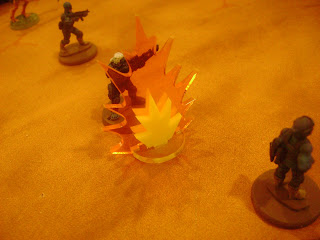 The BlitzGruppe rushes forward to control as much of the field as possible while 8 Ball advances at a more deliberate pace to shoot up the Terror Bots. 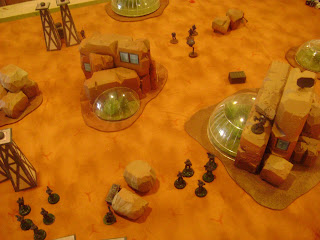 On the right Dr. Xaden and Spec. Bont have an Imperial dataport right in front of them. She quickly hacks into the net while he hoses down the approaching bots and they move forward. 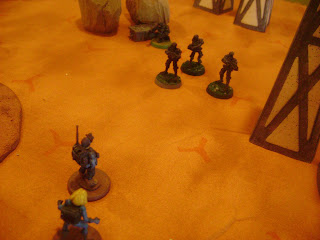 In the center, the Reich Assassin grabs the Jump Core and dodges every shot 8 Ball can put on him. 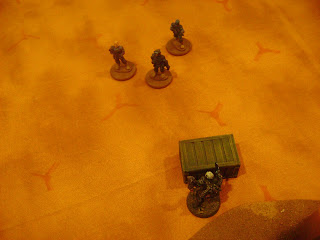 Halfway through the battle, 8 Ball has shot down almost every single bot, but for the BlitzGruppe, that just means the bots are doing their job. Even with the Maj and Sgt Mannesman in hot pursuit, the Assassin still manages to escape with the Jump Core. 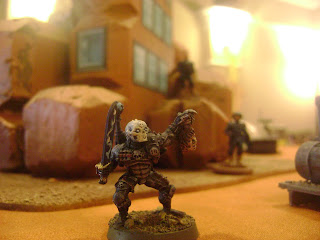 In a furious firefight, Specialist Bont takes out the remaining terror bots and wounds Cpl. Hesse. Dr. Xaden runs through the exchange to keep Hesse from bleeding out. 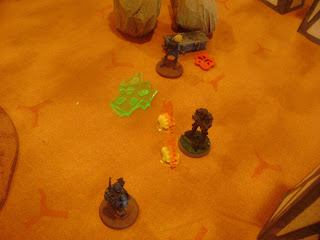 Gruppe Commader Paulus and Reichs Assassin Ratchine escape with data and the precious Jump Core winning the scenario. But, 8 Ball has some data of their own AND a live prisoner who soon divulges the existence of the "Haussen Arcologie".  This is the very first clue in finding a hidden 4th Reich Enclave.