In the last chapter, link, the Kingdom of Colores' most elite special operations team, "8 Ball Command" was making a sweep of an abandoned Imperial maintenance facility when they were attacked by a team of Reich's operatives.  The Nazi's made off with a jump core and some moderately valuable technical data. But 8 Ball managed to capture Cpl. Hesse. He gave up the coordinates of the Reich's hidden shuttle and compromised their original plan to get off planet. The fallback option is to go undercover and ex-filtrate with commercial traffic at Sachine’s Landing Field.

8 Ball Command is to deploy and intercept the Agents.

The Agents of the Reich will not be a faction, but the objectives for this scenario.  The opposition to 8 Ball is a team of Gis Freedom Fighters.  The Gis are an artificially created race originally designed for combat and harsh environments. They are always interested in encounters with creatures that are genetically modified.  A Reich’s Assassin would be a huge catch. 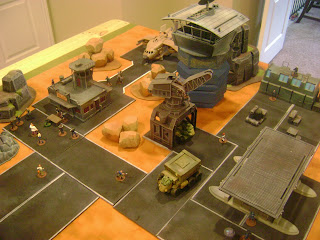 As a pre-scenario event, the Gis have bribed the foreman of the cargo area. It will be empty of people, and weapons may be used as normal.  Conversely, in the passenger terminal, if any firearms are used or any challenge to capture Col. Paulus fails, alarms will sound and 1-3 Security Teams (Gangs) will exit the Terminal through the main doors each turn. The Security Teams will move toward and open fire on the closest Agent when activated.  They are treated as a 3rd league, but can never gain the initiative.

By the Passenger Terminal, Maj Guiscard and Dr. Xaden spot the disguised Col. Paulus at the ticket desk.  They cautiously move in. 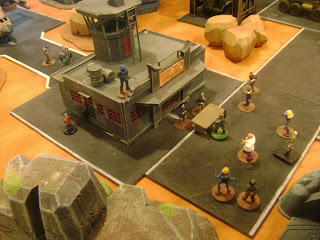 In the Cargo Area, the other members of 8 Ball discover they are not alone. Three members of the Gis Freedom Front and a hired driver are busily moving a truck into position to steal the Reich's Assassin cryo-sleep casket. 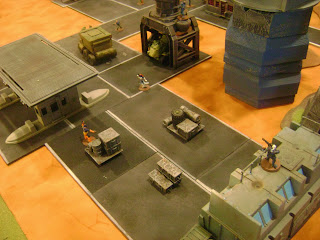 Whatever the Gis may have originally planned, the presence of 8 Ball provokes a furious fire fight. 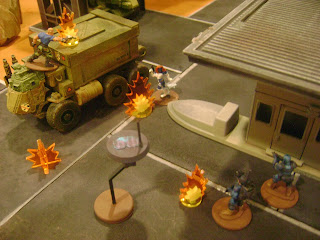 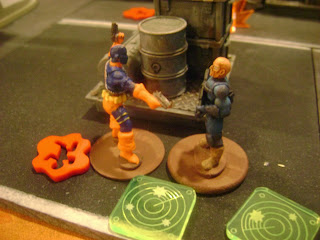 Back at the Passenger Terminal, Dr. Xaden makes her move... 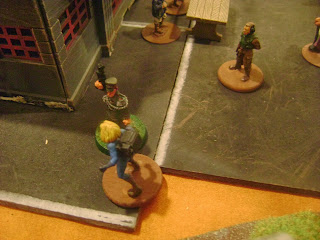 ...and botches it! Maj Guiscard quickly moves in and takes the agent into custody, but the whole place erupts in alarm. 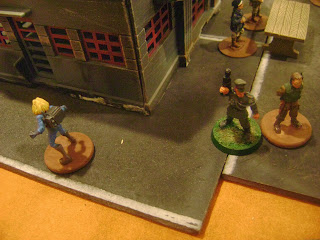 Dr. Xaden tells Guiscard to make a break for it and she will try to slow the security troops down. She gets a couple with gas grenades, but there is no way it will be enough... 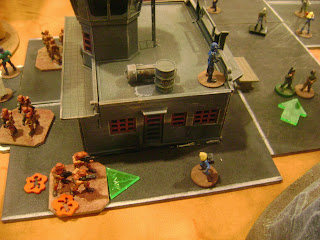 Back in the Freight Yard the fight is in full fury... 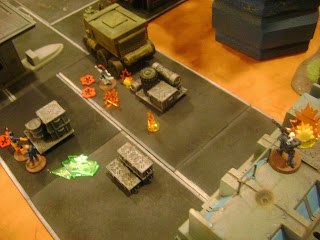 Dr. Xaden goes down, but the Major makes good his escape into the maze of the Sachines settlement. 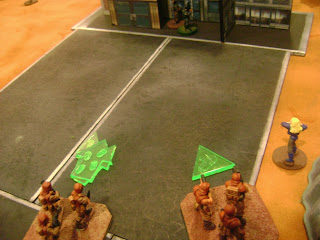 Followed closely by the Gis in the stolen truck. 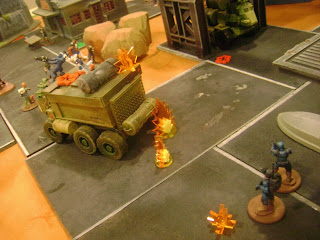 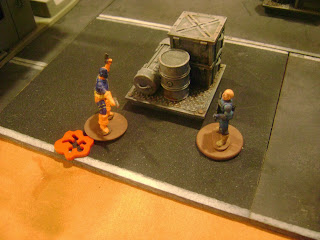 Aftermath:
This was a very fun game.  The idea was to keep a section of the scenario as a "social" environment, but well the best laid plans, and on turn 2 that went south in a hurry.  In the end, 8 Ball had Col Paulus, but Dr. Xaden was in the hands of the Sachines authorities and her condition was unknown.
Both sides came out with the Plot Point most important to them.  The Gis had the Reich's Assassin and 8 Ball captured Col Paulus and the jump core. 8 Ball came out just 1 Plot Point ahead of the Gis.
There are 2 follow up storylines from these mission:
1. Top Prioirty for the Team is to recover Dr. Xaden
2. Col. Paulus is high enough up the command chain to know the location of the hidden Nazi enclaves.  If he can be compelled to reveal a location, 8 Ball will have the mission of reconnaissance to plan the attack.
______________________________________________

I would like to welcome our 20th follower, Torbjörn Sarchosuchus!