Campaign Background
On one of the farthest edges of Imperial space is an area designated simply as Sector Six. Its unimaginative name is a true reflection of its nature.  It is not just a backwater of the Empire, it is the backwater of the Empire. Sector Six does not sit on any major shipping lanes, it does not contain any precious resources that cannot be procured in larger quantities for lower cost from somewhere else, and it has never been threatened by any major Imperial rival. It lies months of travel from Imperial Prime even under the best of warp conditions. Out of pure diplomatic apathy, Imperial control has been slipping away for centuries.

As Imperial garrisons have been gradually reduced more and more local entities have asserted their independence, some worlds have formally broken from the Imperium and declared themselves states, but most simply act with autonomy and pay lip service to Imperial sovereignty.

One group has been calculating when the Imperial forces finally become small enough to no longer matter, and that’s the spark.

Campaign Situation
The recent recall of the major fleet units to Imperial Prime (to deal with some sort of succession crisis), has inspired the 4th Reich to decide it is time to strike.  They will begin their offensive on the planet Xochoi and attack toward the Sub-Sector capital, Rentlaw.

Not all details are yet known about the Nazi attack, other than they seem to be smashing all opposition.  The how and why they are suddenly so strong has yet to be divined by Imperial Intelligence.

What makes the situation more alarming is that it has become clear that there will be no unified stand in the Rentlaw Sub-Sector.  Imperial control has slipped so badly, many planets are refusing to unite under the Imperial banner, and taking this moment as an opportunity to advance their own interests.

The Strategic Rules
This is pretty simple:

Step 2
Consult the Campaign Map and pick any 2 regions where your faction and your opponent’s faction are adjacent. 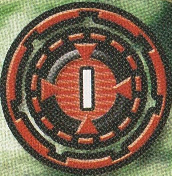 (a region with the red circle symbol) is considered adjacent to the Starport regions at the other end of a Warp Transit.

Rentlaw, the Sub-Sector Capital, is highly populated and developed. ALL regions are considered to have a Starport.

Step 3
Pick a Scenario (see the Scenarios section below), and fight the battle.  The winner takes the loser’s region. Replace the marker on the map.

Players may fight as often as they like, however they may not fight the same opponent twice in a row.

(For readers of my blog:
The club meets once a week, and some players will occasionally meet on Wednesdays. This serves the same purpose as  “turns” without the need for formal enforcement, and the simple restriction of not being able to play the same opponent twice in a row will prevent any player from dominating the campaign just by being able to play “more” games.)

The Narrative Rules
If you would like to participate in the Narrative portion of the Campaign, follow these additional rules.

Required Info:
Character Name and Title/Rank
Faction
Warlord Trait (may be chosen, instead of randomly rolled for)

Optionally, but highly encouraged, is a short biography and some explanation of how or why  this character is involved in this campaign.
All information received will be posted to this blog as part of the storyline.

During the Campaign
Characters will receive benefits (and disabilities) based on the results of their battles and applied to my secret charts. (oooh, Secret Charts!)

Please reach out to me if  you are interested.

I think I have it set, so you can simply follow the rules above, with these simple adjustments:

1.  Fight one battle a week (anytime) against friends (who may or may not be participants themselves, and send me the results

2. The Campaign Map will be updated on the blog, so you can pick regions just by visiting the blog. If we accidentally fight a battle on one of the spaces you choose before your report, your results will be adjusted to fit the current iteration of the map.

3. You may also participate in the Narrative portion, and your character WILL be included in the storyline the same as if you were local

IF YOU ARE STILL READING...
Here is a summary briefing of the campaign astronomy:

Xochoi
Climate: 1A, Temperate, Hospitable
Population:  >1,000,000
Political Affiliation: Imperial
Notes:
A small moon in the Xo system, a few obscure records still list Xochoi as the home for a famous, ancient, but mothballed Imperial Military Unit.  Of the few who do know of some sort of garrison, almost all of them are certain it is some sort of military museum.  Only a few Logistics clerks on Imperial Prime (who infrequently rubber stamp some supply requests), and the garrison itself are aware that Xochoi it is the home of the fully armed and operational 34th Imperial Titan Legion. The massive bueauacracy has achieved what an army of spies never could. A mThat is, until the 4th Reich stumbled across a supply ship bound for Xoxhoi during a raid....

Telebrainia
Climate: 1B, Humid, Semi-Hospitable
Population:  Estimated ~ 100m
Political Affiliation: Telebrainian Consensus
Notes:
The Telebrainians are a race of telepaths.  They attend to their own affairs, and have not shown any ambition to expand their borders. The numerous Humanoid settlements on Telebrainia have been left alone. Very rarely, a Telebrainian can be found traveling the Sector or even more rarely, as a political Ambassadors to other systems.

Eleteema and Batatampi (The Twins)
Climate: 1A, Temperate, Hospitable (Eleteema)
2C, Cold, Semi-Habitable (Batatampi)
Population:  .8bn (80%/20% Eleteema)
Political Affiliation: Imperial / Functionally Independent
Notes:
The E&B system is the home to the anomaly of 2 habitable planets.  Known as “The Twins”, they continue to pay through the Imperial financial structure, but have assumed their own defense responsibilities. In reality they conduct their own affairs.

Rentlaw Prime
Climate: 1A, Temperate, Hospitable
Population:  3bn
Political Affiliation: Imperial
Notes:
Capital of the Rentlaw System. It carries a small garrison but a very bloated administrative infrastructure.  There are a few Imperial Army Regiments as well as Ecclesiarchy contingents.  The Imperial Navy has reduced their combat units to a few squadrons of destroyers and other non capital ships.

Sibuka
Climate: 2B, Arid, Hot, Hospitable
Population:  15m
Political Affiliation: Independent
Notes:
Sibuka broke from Imperial rule about 225 years ago. They maintain a military just barley large enough to deter the Imperium from retaking the system, but really have only maintained their independence due to Imperial apathy. A mostly desert/savannah planet, it is industrially poor, and contains no valuable resources


A mining planet. Mostly convicts and forced labor governed by a small elite.  Mallathorne has a strong military for its size, but it is equipped for controlling the population rather than heavy combat.