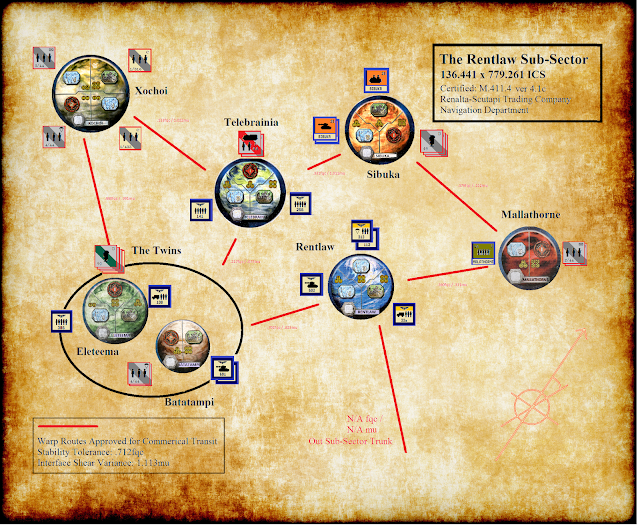 Briefing Officer, Major Guiscard
Unless you have anything you can share from Imperial sources, the current situation in the Rentlaw Sub-Sector looks like this.
Units in RED are either known Reich units or proxies not of Reich origin. Some seem to be completely independent, and some seem to be acting knowingly or unknowingly to further the Reich agenda.

In summary, we are in retreat everywhere. The situation is analogous to the situation in the Pacific in WWII immediately following the "Battle of Pearl Harbor".  Our enemy seems to be everywhere, and it's clear his plans have been in the works for a long time.

Reinforcements are on the way, precious few from the Empire itself, but more from allies. We need more information before prioitites can be made for where these reinforcements should be employed. I suggest we get a Command ship in Rentlaw with appropriate personnel so decisions can be made in a timely manner.

GovGen
In other words Major, you are politely asking me to get my elderly ass in gear, and get over there.

Sub-Ambassador Tigh
Your wife is not going to be happy, Governor

NAMED COMMANDERS (To this point)

Hello Readers!
Tomorrow begins the official start of the "Rise of Tyranny" Campaign!

Don't forget to submit the battle results of your games, and don't hesitate to send me any background and / or narrative material.  It will all  be published.

Speaking of published, there are 2 places on the web that will be (and have already been) posting additional battle reports and background:
First, from overseas, is the excellent "if it wasn't for ones" blog that already has a preliminary battle report up:
http://ifitwasntforone.blogspot.com/

ALSO, there is the excellent "Feel No Pain" (FNP) Gamers Club site with video battle reports and commentary:
http://www.fnpwargamers.com

And the store where FNP plays their games usually posts photos of games on their EXCELLENT terrain:
http://www.goldmine-games.com/

Lastly, each week I will offer a special scenario for participants to play.  The scenario will reflect the theme of the campaign. The scenarios are located in the tabs at the top of the blog, you will notice a new on called "Campaign Scenarios". Using the scenario is voluntary, but for everyone who does, I promise more items (both good and bad) to add to your Leader's game stats
Labels: The Rise of Tyranny Campaign