Background
After a covert technology deal between the Kingdom of Colores and the Rex-Avis Clan, the Imperial Inquisition has begun operations to recover the prohibited tech and punitive action against the two principal factions.(See "Project Iowa", Episodes 1 through 3 for more info)

Scenario
Aware that their deal is no longer a secret, the Rex-Avis Clan is saying their farewells to their Colores counterparts so that they can return home to protect their own. "Colorado" Rex-Avis, Sir Ursaline Drakemore, and Kitty Luong are scheduled to the first shuttle back to their ship, the TMS Enhance. 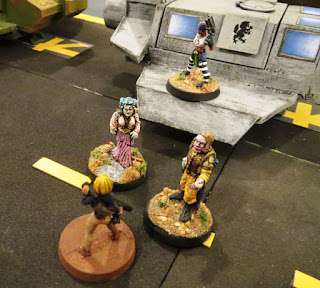 Max and Cookie are below in the crew quarters,
settling up their poker winnings from some
of the guys in the Colores Security Squad

Jasper Dysdeimos has agreed to stay behind and he is
allready hard at work in the engine room
(wait... What does an Orbital Station need with an engine room?) 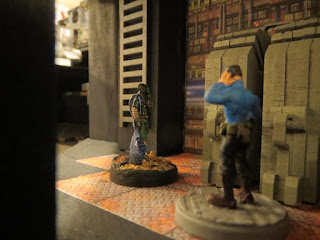 At mid-deck Professor Applebeck (of the Colores Royal Astrophyics Institute) and his Jokero assistant are preparing the last Warp Imploder and other equipment for installation on the warp engines. (..warp engines What kind of station is this?) 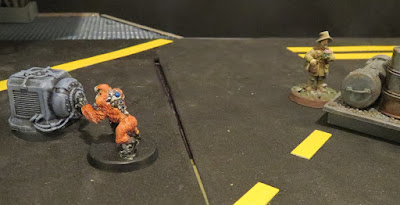 Meanwhile...
at that very moment Inquisitor Guimar's Strike Team is approaching in a Null Sphere.

They have been prepped to forcibly board the Colores Research Station. They believe it contains equipment to construct bombs that tap the Warp for their explosive power, potentially generating enough force to destroy whole planets. The Inquisitor and his Team intend to destroy the facilities and abscond with any bombs already constructed.

The moment of impact... 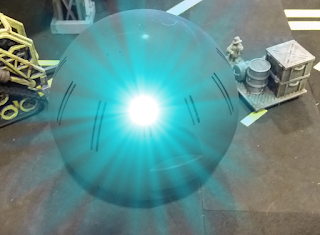 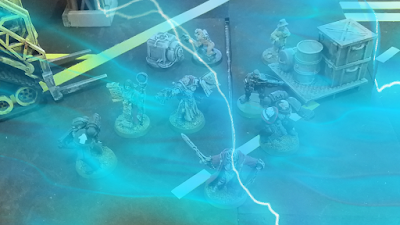 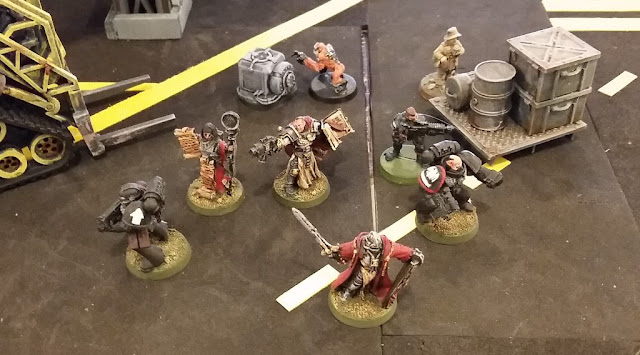 Inquisitor Guimar spins around, trying to get his bearings.
First, he sees the Warp Imploder almost right at his feet,
then he sees the Professor staring, shocked, right back at him
and down the deck, unbelievably, stand the the architects of the conspiracy 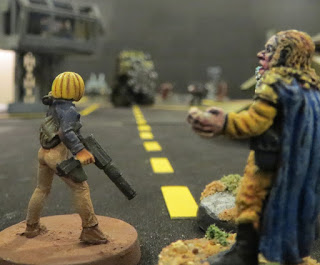 ...and then it hits Guimar and his Team, this isn't a Space Station... IT'S A SHIP 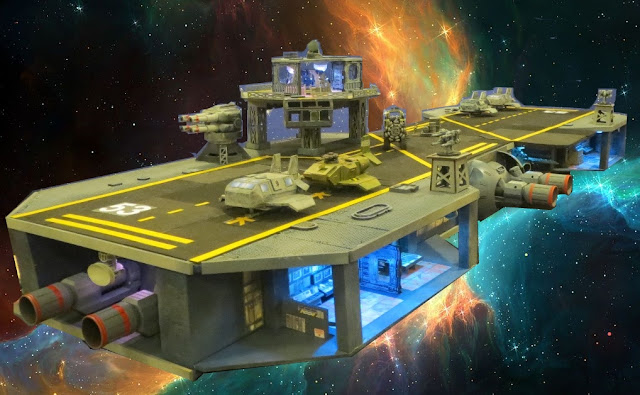 The frozen shock is broken by the blasting Assault Rifle of Blake Walker firing through the glass of the Traffic Control Cabin.

"Go Go Go!" the Inquisitor screams, and everyone starts firing at once.

One of the Space Marines lays a full volley into Colorado and her shield flares from the impacts. 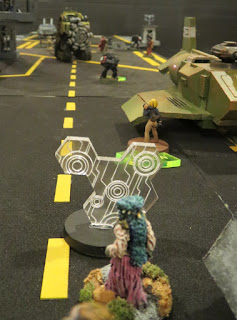 The second Marine smashes the port on top of the Traffic Control room, reaches in and throws Blake to the deck. He lands with a crushing thud, taking him out of the fight 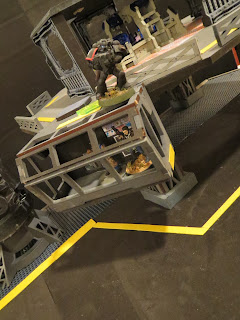 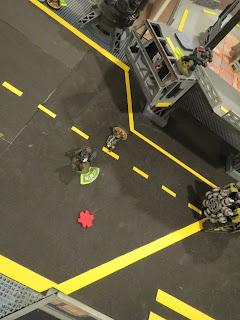 Kitty moves with blinding speed through the firefight 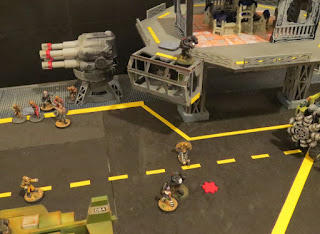 The Inquisitor orders his battle psyker to target Colorado 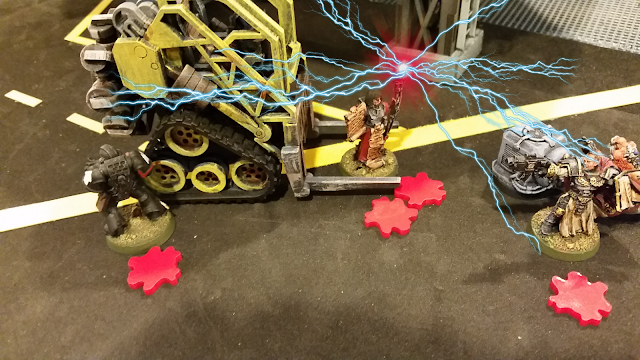 ..but the Colores Navigator zeroes in on her 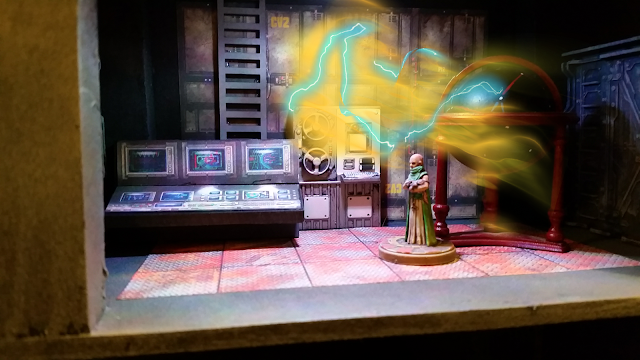 ...and teleports Kitty right in her face 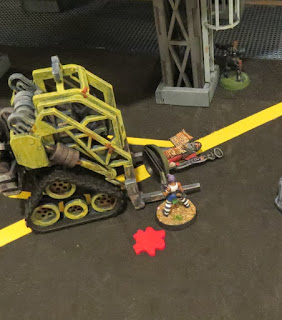 The fighting is intense, and the Rex-Avis Clan are pushing the invaders back, but the Ship's Security Team is taking heavy casualties. 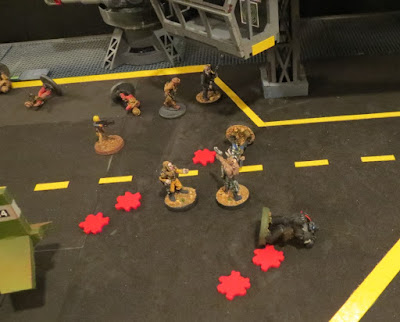 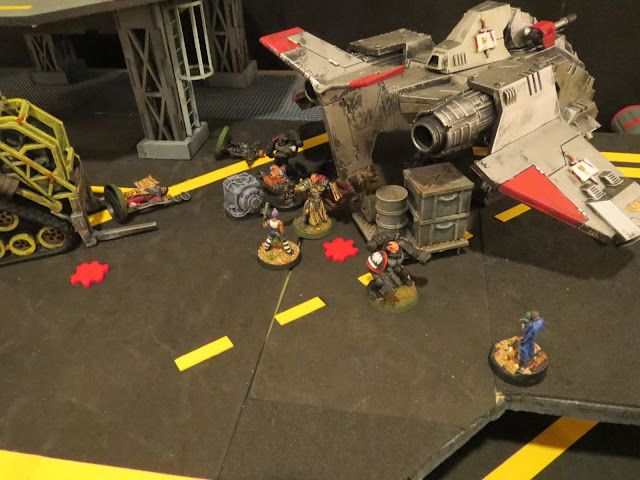 Unfortunately, it is not enough.
The Inquisitor and the survivors of his team escape with Professor Applebeck, the Jokero and a Warp Imploder.

Aftermath
The Inquisitor's ship was tracked entering Warp Space along Red Route 1, which would take it directly back to the Rex-Avis homeworld. Colorado and her cohorts are now in a race to make it back in time to stop Inquisitor Guimar from exacting his revenge. They are accompanied by Ambassador Sophie and a small team who will lend a hand and try to rescue the Professor.

I would like to thank The Composer for agreeing to share his models and his background to bring this campaign to life.  The action now shifts to the Tartarus Rim and his blog, (Link: HERE) for the exciting conclusion of the Cross Blog Extravaganza!

From my end, it has been a blast, and working with the Composer as co-conspiriator has been very rewarding.

I would also like to thank Cheetor's Blog (Link: HERE) for the special effects inspiration.

Yes, that is a gigantic 6 foot model space battleship/carrier on the table.  ...and, yes, it has interior lighting.  The Space Battleship has been my secret project behind the storyline and hopefully I pulled off somewhat of a surprise.  Soon, I will provide a full tutorial (probably after the end of the campaign over on the Tartarus Rim) of how I built it, and lots of beauty shots. It will also be the star of a couple of local events, and I'm sure will feature in more than few blog posts going forward.