Chief of Intelligence, Admiral Jones
(High Level Briefing)
“Approximately 1,400 years ago, the Imperial Cruiser, ‘Interrus’ (hull number 447A32CC) was placed into fleet reserve and assigned a holding orbit above Ocrade. It was then prepped for cold storage and vented to space.  The Interrus remained undisturbed for the next 374 years.

“Fortuitously for us, things then took a turn for the ship, when a departing merchant vessel suffered a massive warp force level catastrophe.  Official Imperial reports assumed that the Interrus was consumed by the explosion, but there were rumors that she had survived and was adrift in warpspace. After an exhaustive investigation, our agents uncovered several catalogued sightings of the ship and gave the data to our navigators.

“We found the Interrus in deep space. She was in good shape, so she was recovered and secretly towed to an orbit above the Bakkun moon where we began to restore her to active service under the codename ‘Project: Iowa’

“Despite a last minute attempt by Imperial and Reich’s agents to derail the project, we have succeeded in bringing her to an operational state. 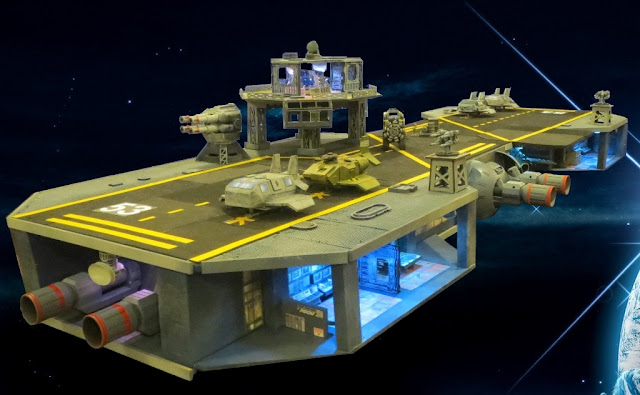 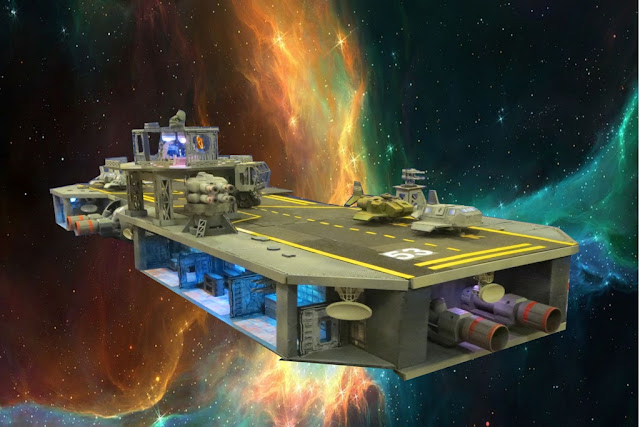 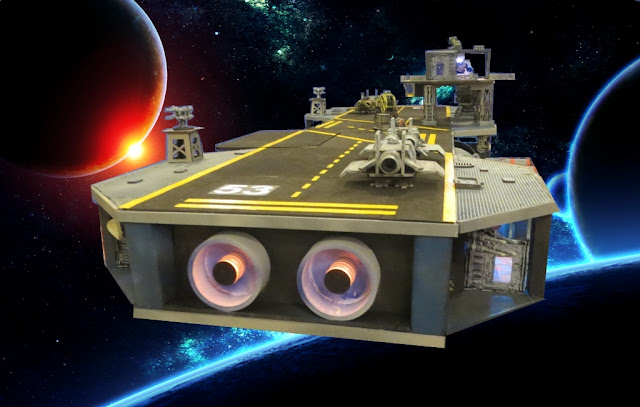 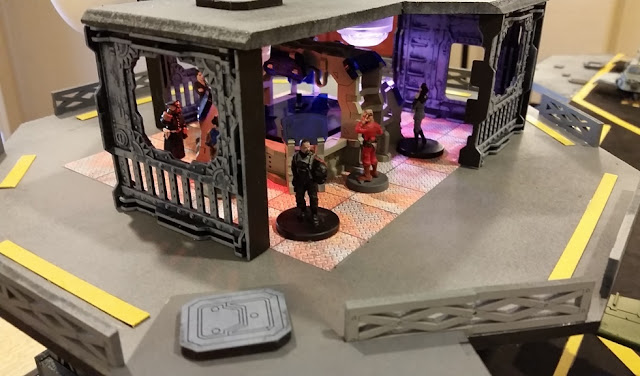 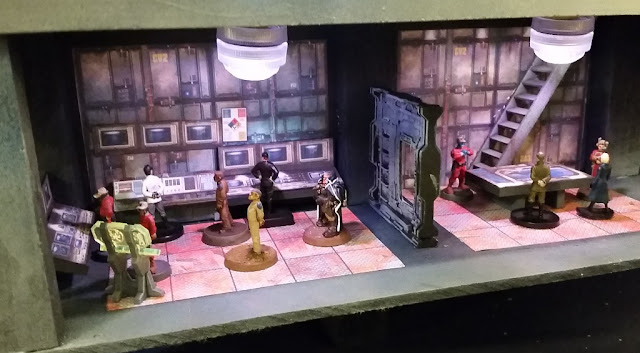 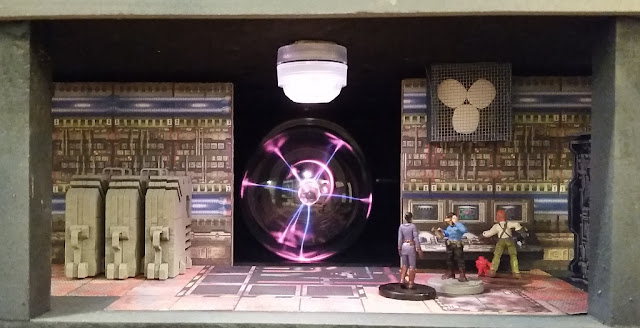 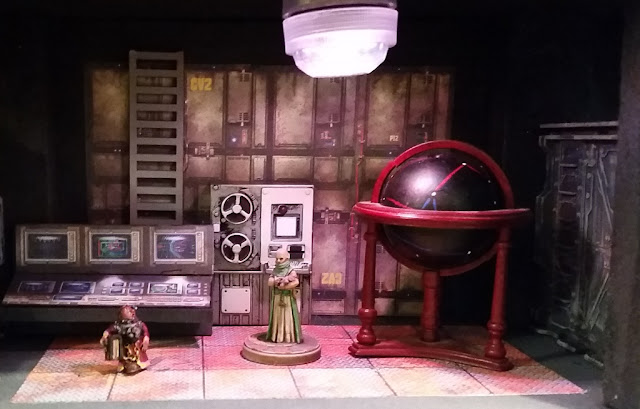 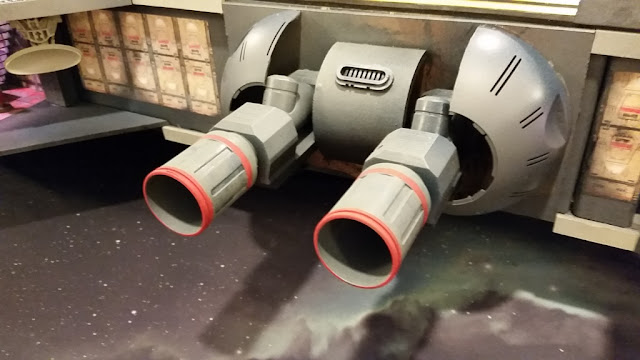 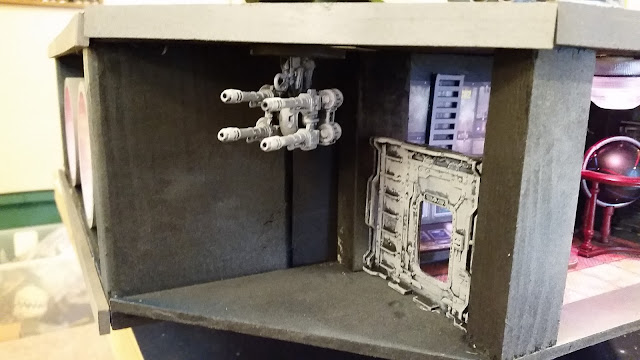 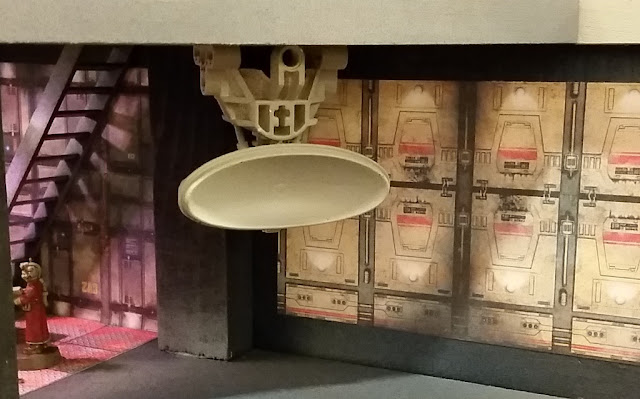 “Unlike some other Imperial designs where the further back in time you look the more advanced and capable they get, our girl is truly an odd duck. Her main battery layout is awkward with asymmetrical fire arcs and to get her serviceable she’s a complete mishmash of technologies. A Frankenship if you will.

“She will be christened, the KCS Mary Shelly”

The Build
So my friend Mike, owner of Goldmine Games, (and longtime Ork player… nobody’s perfect) was lamenting the fact that years and years ago, he was dumb enough to sign up for a tournament at a major convention and missed out playing in a huge Ork battle with lots of yelling an laughing. He has always regretted it.

I asked him to describe the event, and he said the only thing he knew for sure was that there was an aircraft carrier involved.

As you can see…
CHALLENGE ACCEPTED!

I drew a bunch of sketches, and ended up with two competing ideas of design concept:
1.       Traditional Aircraft Carrier
2.       40k Imperial Cruiser / Pre-Dreadnought (I’ll use IC/PD as an abbreviation from here on) 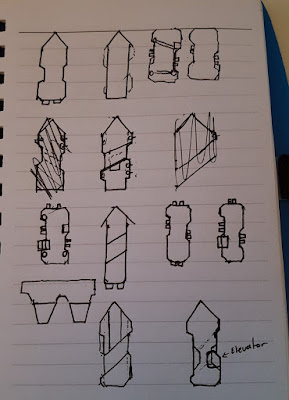 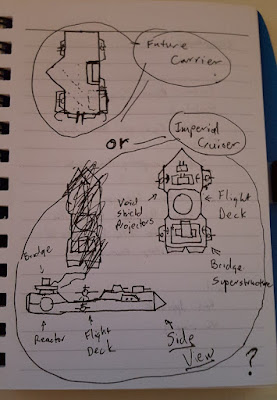 After going back to Mike for direction, he offered up an inspiring “I don’t know”, lol…

This plan was just too ambitious, but it did lead me to the next idea. Flip the concept, put the carrier deck on top, and the below decks would be the guns for the IC/PD.

Next, I did some research on carriers. Did you know that there have been two carriers built with the Island superstructure on the port side?  It was an experiment by the Imperial Japanese Navy: 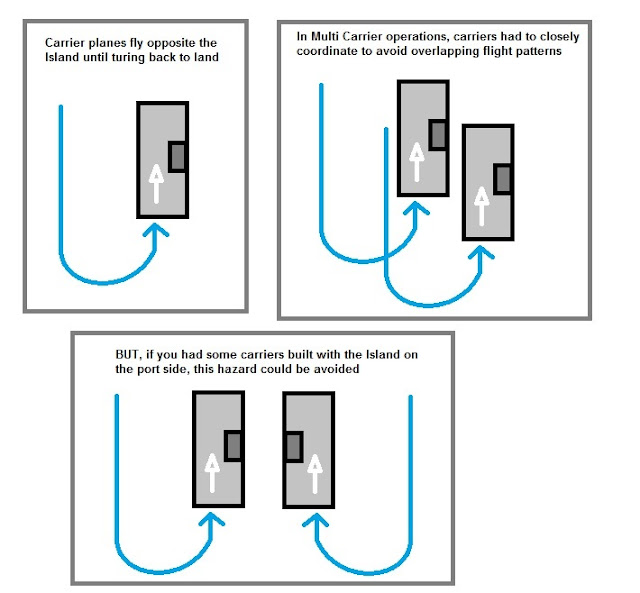 Kind of cool in concept, but in practice it created new problems.  There were no crashes, but there were several incidents where pilots attempted to land the “wrong way” expecting the Island to be on the opposite side. Additionally, ALL operations, like replenishment and refueling had to be executed on the mirror image as well, and after a lifetime of training one way, crewmen could never seem to operate as efficiently “wrong handed”.

In the end, only the Hiryu and Akagi were configured like this.  Both were lost in action, and no new carriers with a port side island have ever been built.

That’s your trivia lesson for the day.

Back on track:
One of the peculiar (and defining) characteristics of some Pre-Dreadnoughts was offset main gun casemates as shown below on this deckplan of the USS Maine. By placing the main guns on the lower deck, I could incorporate the asymmetrical look of those older ships. …and, since modern Carriers have an angled recovery deck (for safety and operational speed), I married that to the placement of the main guns.

Scale wise, I had to thread the needle between playset and the look of actual planes on the model.  Planes had to fit on the elevator, below deck, and plausibly navigate around all the deck obstructions. Every step of the way, I kept planes close at hand to sanity check all of the components. 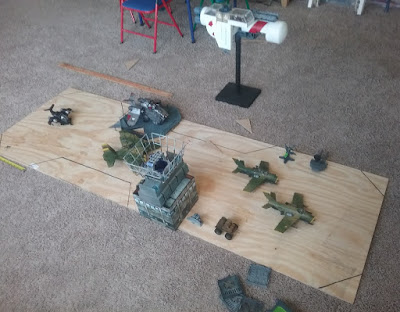 When it came time to do details, I wanted a disparate look on parts of the equipment.  The background of the “Shelly”, is that she is not a new hull.  She is a salvage operation on a 5000 year old ship with new owners who have a different culture, different priorities, and wildly varying (and borrowed) technology.

Lastly, I wish I could say that the elevator actually works, but the best I could do is build it so it can be placed in 3 different positions. 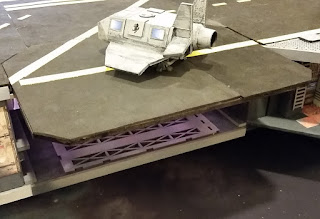 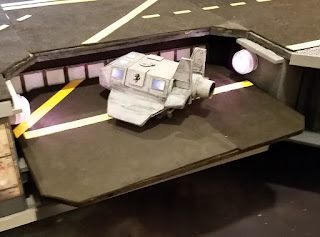 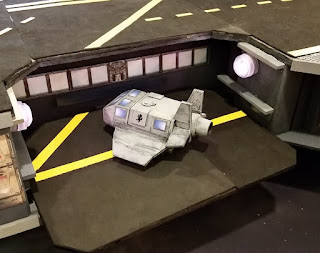 I hope you like it. It was a blast to build, and it makes me think of re-orienting the blog a little to a “Star Trek like” series of following this ship around for awhile.  I’m not sure I’ll do that yet, but it has an undeniable appeal.

Let me know if I can answer any questions or elaborate on a topic.

A big Welcome to the newest reader to Sector Six,
AsaltoRabioso Lleida