TJOTMS, EP.4: Construction of the Nazi Space Battleship and “What the hell is all this really about?”

Hello Readers,
Today will be an “out of character” post about the construction of the 4th Reich’s ship, and then a brief overview of the whole project.

FIRST!
Airbornegrove is ahead of me, here is the latest progress on his carrier: LINK

For my last large build, the KCS Mary Shelley, I really focused on the carrier role, and the gun batteries came after. Although I think she’s beautiful, within the storyline she’s an ugly duckling with serious design shortcomings.

For the Shelley’s nemesis, I am flipping the script. The 4th Reich’s ship will look well designed and sleek, and go big guns first. 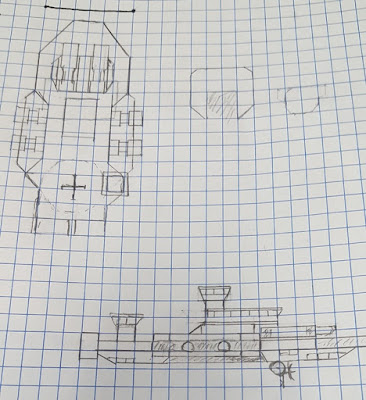 The gun layout will be with turrets and optimize all around firepower. 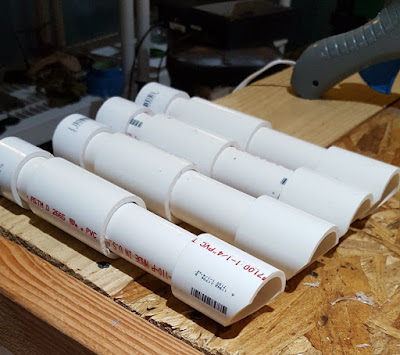 I finally finished most of the gross construction last night. 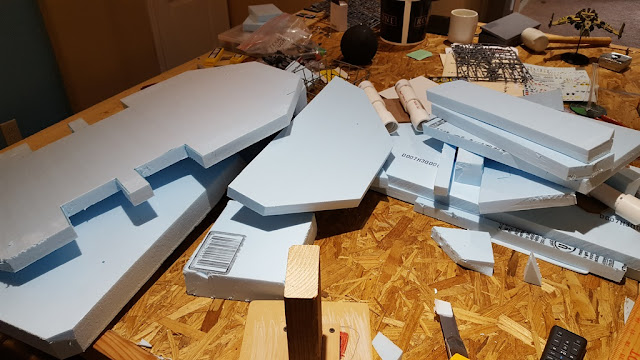 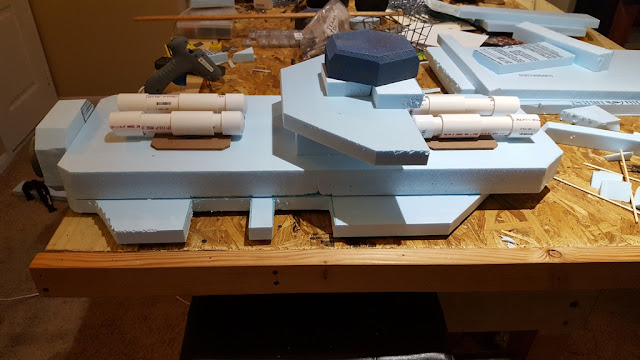 I still have the hangar deck to place underneath and then mount the model on a flying stand. 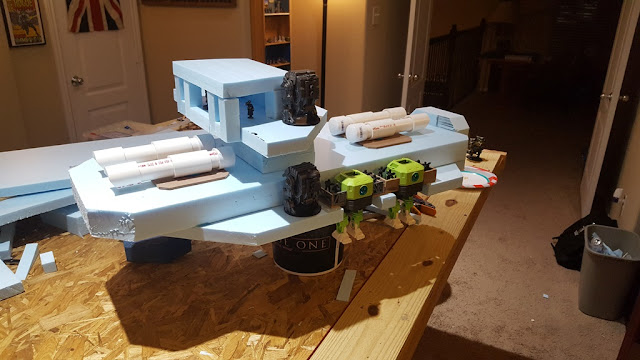 “What is that hanging off the side?”, you ask…
Stay with me, this may take a while. As Grove and I organize this thing (event, campaign, flash mob… whatever) there are certain conventions we have chosen to guide the story, the games, and our builds. One of the items we agreed that was a “must have” were boarding actions. Ok, well how could we square that with interstellar transport and planet splitting weapons? How do we justify the "rule of cool"?

Reaching back into history for precedent, the giant ships of the line of the Napoleonic /Nelson era carried more artillery on one ship than most armies marched with on land. Even with all those guns, the vast majority of actions ended with the losing side being taken as prizes instead of sunk. So there’s one thread Grove and I can tug on.

The next thread to pull, comes from the 20th century, Battleships. The Battleships of the time were pretty much unsinkable. They weighed in at 5 to 10 times the tonnage of an aircraft carrier, and even after the disaster at Pearl Harbor, 7 of the 8 battleships were refloated.  And post war, two of those became test targets for atomic bombs (the Pennsylvania and the Nevada) and the atomic blasts FAILED TO SINK THEM!

Heck, the Bismarck was bombarded by 2 battleships and several cruisers to the point that the attackers expended almost all of their ammunition, and although completely non-functional, she was only finally sunk by scuttling charges placed by her own crew and torpedoes.

Lastly, we took on the 40k trope, “Space Hulk”, an entire game on the idea that the hull of a ship would survive long past the death of the crew.

Mashing together all that source material, we've informally established that, capital ships can be gutted and blasted hollow, but never destroyed (well, ok, almost never destroyed). After a battle, a burned out hull can be taken back to a shipyard and have a new ship slid underneath. That being the case, our ship to ship battles will involve massive gun duels followed boarding actions against the survivors.

... so that leads us back to the Nazi Battelship and the stuff hanging on the side. The ship has mounted dual purpose Assault Pods. While in the stowed position, the Pods are powered from the ship, and provide AA protection. Additionally, they are also used in the Assault role, launched at enemy ships to transport the Autom boarding teams once the gun battle has reduced the enemy’s ability to resist. The automs themselves are most efficiently stowed in their travel position on the Assault Pods exposed to the vacuum of space. 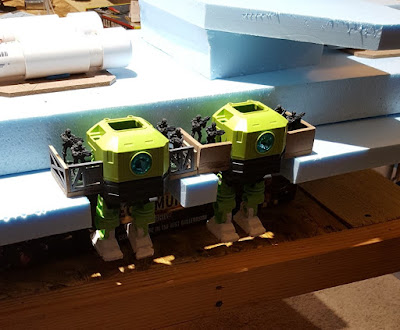 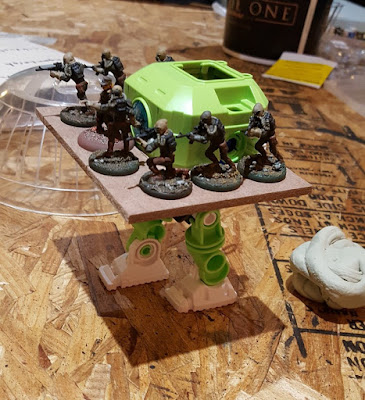 A couple of readers have sent emails telling me that they are confused about what is going on with the storyline and the cross-blog plan between myself and airbornegrove (his excellent “Give ‘em Lead blog here: LINK). This post will hopefully provide some clarity.

In short, Grove and I are designing a massive apocalyptic campaign based on building 40k scale-ish capital ships and bringing them to battle.

Step 1 (this is going on now)
EARLY Planning, Story Concept and Narrative Building, and Game Design

Building - Each of us will build a Battleship/Aircraftcarrier/Battlestar/StarDestroyer
I already have the Mary Shelley, and Grove is well along with his capital ship. As you saw above, I am also constructing another ship for the 4th Reich. These ships are more of a playset design, in that they cannot possibly scale to the 40k/BFG background, so we do the best we can to fit, guns, missiles, fighter planes and boarding parties into an approximate 4’x2’ footprint.

The story - So far, the groundwork is that all of the factions will clash over New Texas. Nearby Graveskul (the centerpiece of Grove’s blog) there is an intersection of space and time that allows instantaneous teleportation across the galaxy. All of the factions are making the journey to try and control (or acquire) this trans-dimensional teleportation ability.

The Games - We want to have 3 sets of games and have rules ready to play them
1. Dogfighting (Midway in Space) – These rules are mostly done and written. They started as a ruleset from the 80’s that Grove knew about, and we began by cutting and rebuilding them. I have 2 previous posts that are games based on these rules.

2. Ship to Ship (Jutland/Tsushima Strait in Space) – This is an expansion of the Dogfighting rules, and we are just starting to put these together

3.  Landing/Boarding Actions (see any Pirate movie or read something form Patrick O’Brian or the Hornblower series) – We are planning to use Donnybrook as the root, but expand to cover our specific needs

Step 2 (this will happen over the next month or two)

The Story – Add main characters, provide motivations for all of them and weave together Vasken and his Goonies, The Mary Shelley, Count Grabbo, and the 4th Reich into a set of conflicts that make sense and generate all the battles we want to have.

The Games – Run remote games to playtest out all 3 game types, and develop the storyline.

Step 3 (summer 2018)
There will be an Odyssey of ten thousand light years, narrowed to fighter strikes across a million miles, focused to massive gun duels of starships from thousands of miles, and then narrowed finally to where it will all lead to somebody getting stabbed with a sword from arms reach.

“With my last breath, I spit at thee!”
-Khan (screw Shakespeare, Khan was better)

As you can see there is a HUGE element of “building the plane while we are flying it” and Grove, a couple of others, and I message almost constantly to motivate, innovate and drive the project along. I have delusions of grandeur that all of this will lead to a printed book for the main participants as a permanent record for us, to remember when we got involved in something so objectively pointless, yet so vitally fun that we devoted 9 months to it.
Labels: Background Terrain Voyage to New Texas Voyages of the Mary Shelly