Hi Readers,
I was hoping to have an episode to advance the storyline, and while the game has been played, the film is not yet in the can. However, there has been lots of progress on airbornegrove's blog, (Link: HERE) and I feel the need to show I'm not just phoney baloneying my way through this (or at least any more than he is.)

Like the last time, I'll go through the 3 components Building, Story, and Gaming...

Building
I've been working on the main guns of the Nazi Battleship... 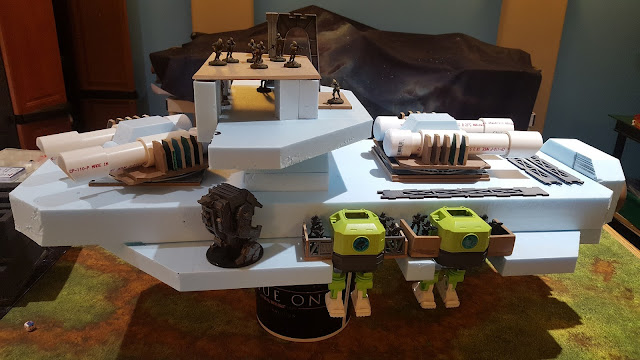 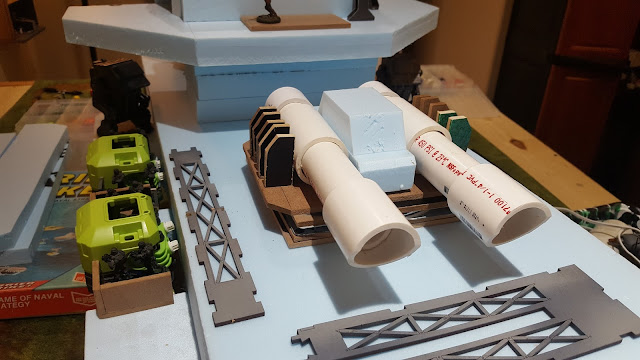 The turrets rotate. I mounted them on lazy susans. I think they look pretty good. One thing that I'm not liking is that the pvc is amazingly heavy. I'm going to have to modify the base design to be distributed under more of the model for stability.

A fellow model maker was asking me how I do the lighting effects. Brace yourself... this is some high tech stuff here.. 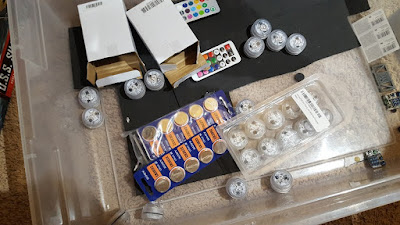 That's it. 3 sets of 10 LED party lights from amazon at about $15 a set. They are remote controlled and can be set to any color and to flash or strobe if you want.

Then I just get some sticky tack... 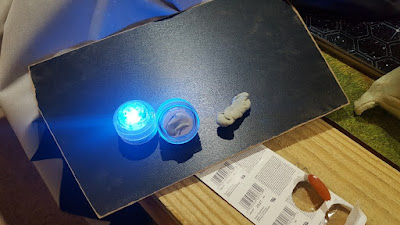 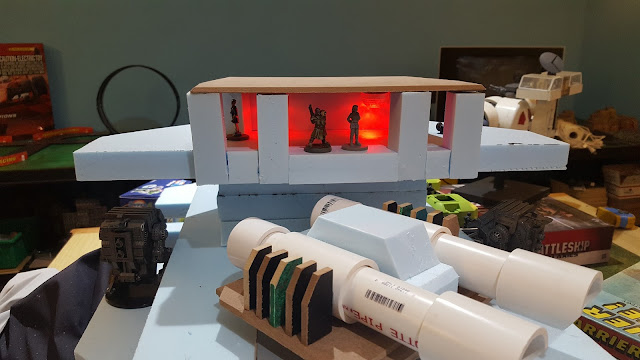 (nothing says evil like a Nazi Battleship with a bridge under EVIL red illumination... EEEEVILLL!!!)

There are drawbacks. I cannot leave them in place. Even turned off they drain their batteries, so I have to take them all down every single time and insert an piece of paper between the battery and the contact spring to interrupt current flow.
...and then setting up again is the same deal. 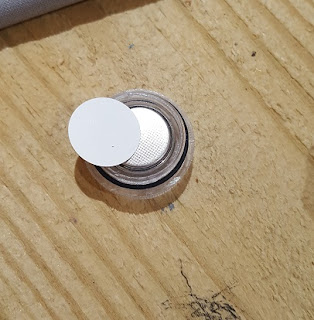 Feel free to ask me to elaborate on anything you see in my models.

Story
Currently, on my side of the project, I have 3 good episodes to go through on the blog as the Mary Shelley makes her way to New Texas. OTOH, I'm stuck on names. I need a great name for the Captian of my Nazi Battleship and on that note, I need a name for the ship itself. My brain is killing me with the mustache twisting nefarious bad guy names we've all heard a million times. It's like a Britney Spears song that won't stop and banishes all other thought. (Wolf, Wulfgang, Goebels...Wolf, Wulfgang, Goebels... Wolf, Wulfgang, Himmler! ...holy crap brain,  please stop)

Gaming
Fighter Rules, I think are "done". Let me manage some expectations though. In this context, "done" does not mean "ready to submit to publishers and sell a million copies". I'm a hobbyist. "Done" means the people I game with can understand what I've written, and I will be close at hand when we use them so I can lie my way through anything that doesn't work and blame airbornegrove .

Ship and Capital Ship Rules have some strong concepts, I've been moving models around, rolling dice and consulting with Cheetor, Whiskeypriest, and airbornegrove. I might have something written in the next couple of weeks.

After that, BOARDING RULES!

Thanks for looking!
Labels: givemlead.blogspot.com New Models Voyage to New Texas Voyages of the Mary Shelly