Gettting the Band Back Together: MonolithCon IV 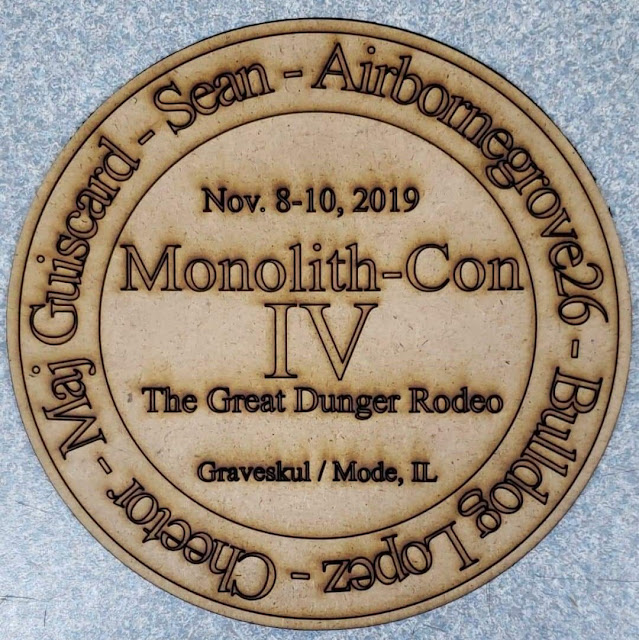 This was my second trip to MonolithCon, and this time was even better than the last. I arrived Friday early in the afternoon and we immediately dove in.

In an amazing show of commitment, Cheetor flew across the Atlantic and joined us this time. If you've been following the GovGen blog for awhile, you'll know Cheetor and I have a history. In 2014, we played a campaign where I sent him a set of minis and he played a series of episodic games, then he mailed them back (plus some of his) and I played a set of episodes to complete it. It was one of the most satisfying gaming experiences I've ever accomplished. Here's the link to the first episode: https://govgensectorsix.blogspot.com/2014/03/the-secret-war-part-1.html

The whole shebang was done by posts and email, so MonolithCon IV was the first time Cheetor and I have ever spoken, much less met face to face.

Here is a pic of the principles from that 2014 adventure together again. 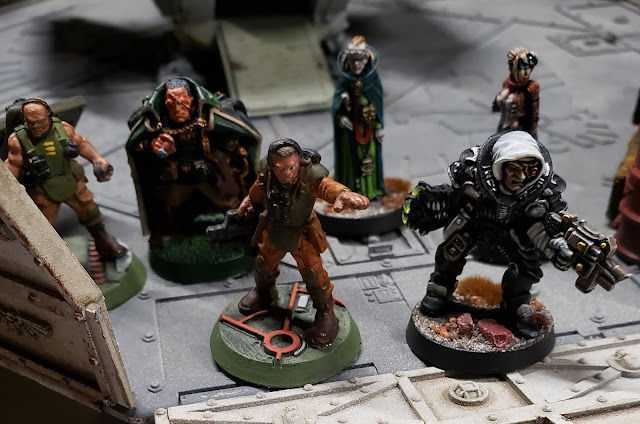 The first 2 games we played (after I arrived) were done with the "Hardwired" ruleset. 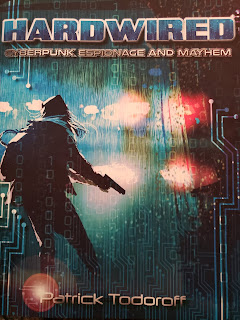 It's a tight co-op rules set for a "small team of spec ops vs a horde of minions" style game. It worked well, and provided good games. Unfortunately, I was too wrapped up in the mission and I didn't get many shots. There was, however, this epic grenade toss from the cover of the cactus with red spines (heh heh) 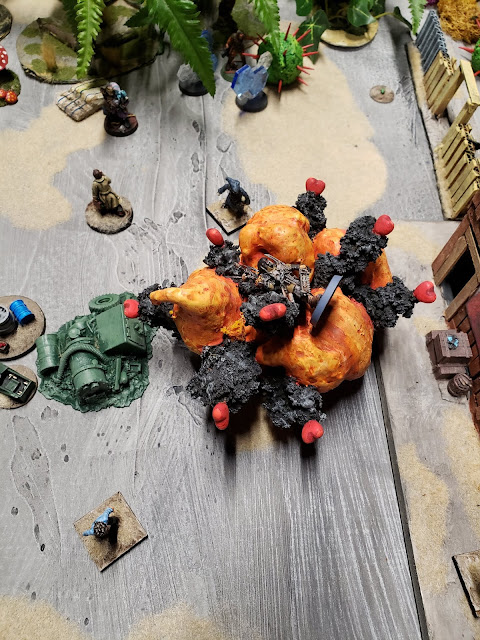 Next up was 2 games of Aeronautica Imperialis.  In the games that we play, it's adapted to 28mm scale models.

Mission One: The Patrol 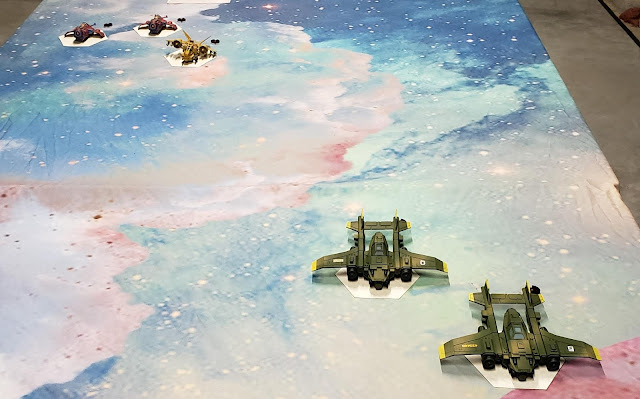 A pair of Imperial Thunderbolts (P38 Varaint) have turned home at the end of the patrol leg, when they are jumped by a flight of 3 Dakka Jets. 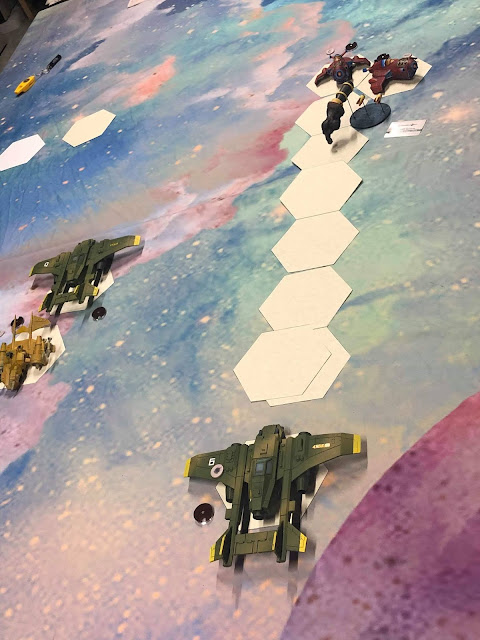 The Thunderbolts split and reverse...
Thunderbolt 6, launches missiles, but only damages the target, while Thunderbolt Q passes so close to the Dakka Ace, he flips inverted.

On the next set of turns, Thunderbolt 6 gets overwhelmed 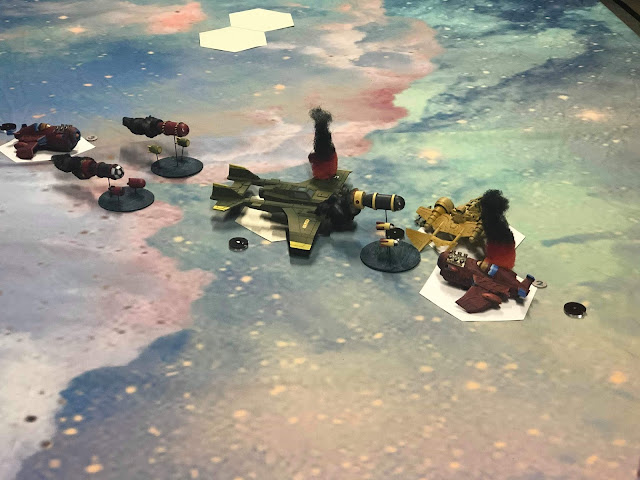 ...and in a flurry of missiles and shots, 6 goes down 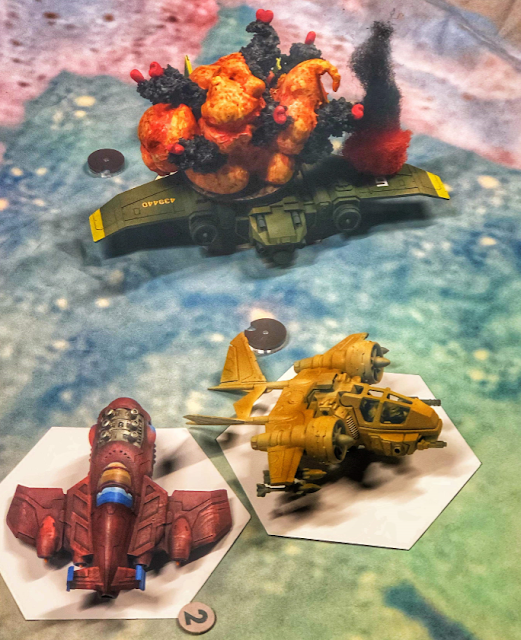 ... things were looking grim, but Thunder Q turned it around and shot all 3 Dakka Jets down. Again, apologies, as I failed to take pics because of being too involved in the game.

Mission 2: Strike on the Technodrome 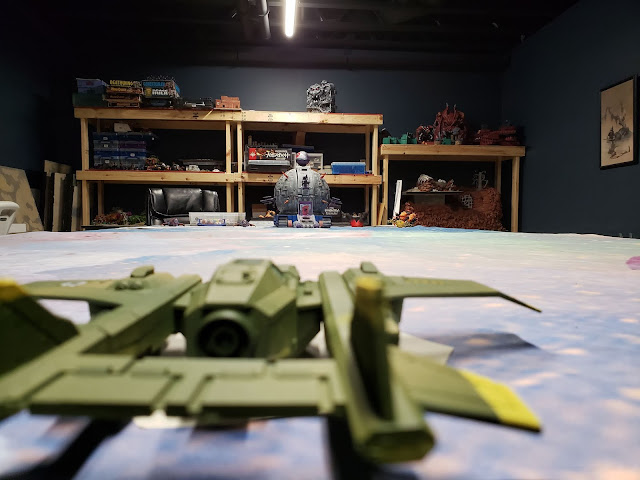 Krang's Technodrome has reappeared in the skies over Graveskul. Thunder 6 and Thunder Q were tasked with a strike mission to destroy it or drive him off. 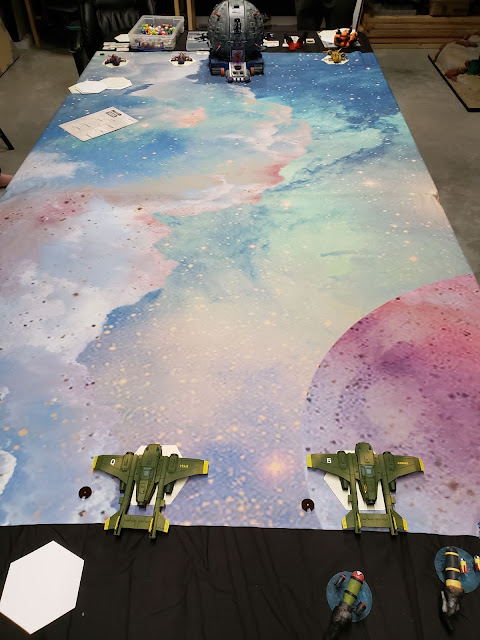 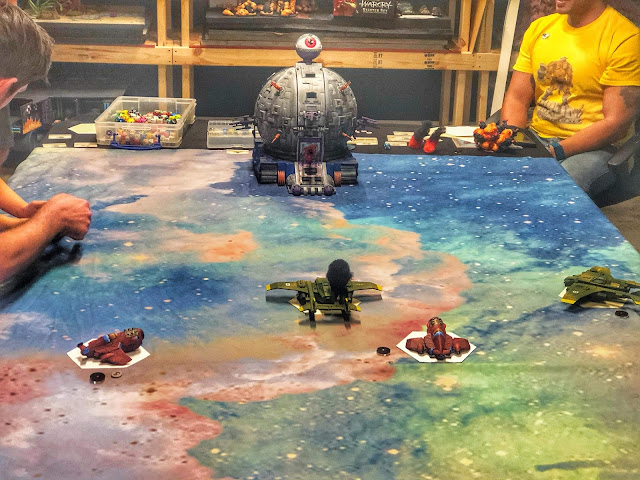 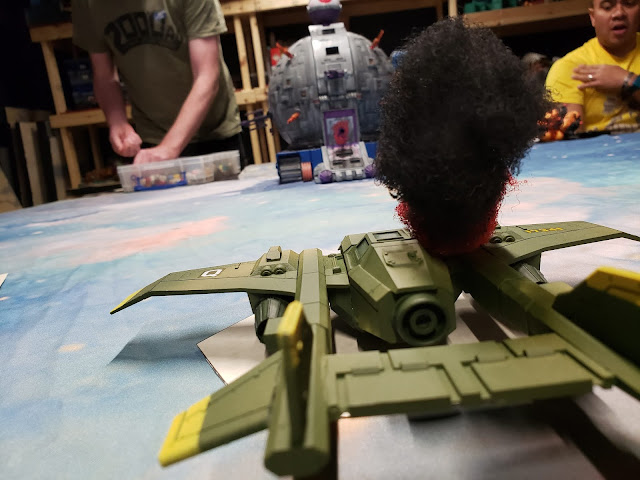 "Stay on Target!"
Q manages to salvo his payload. 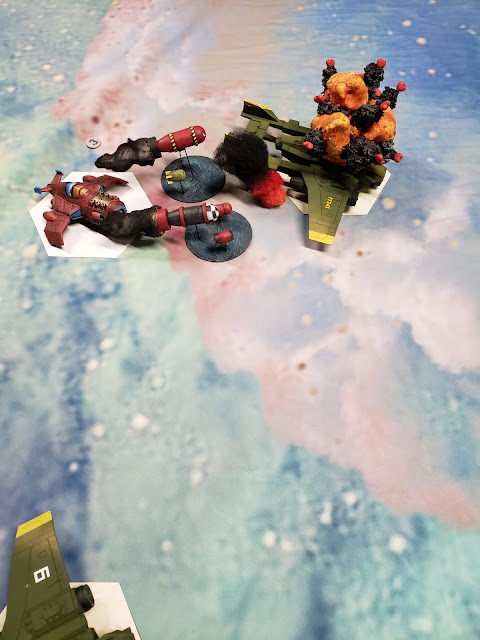 ...but pays the price 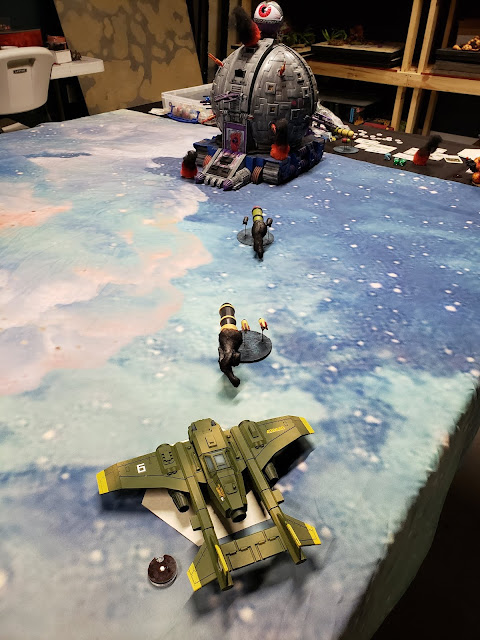 "How much can that thing take?!?!!"
Thunder 6 is up next and unleashes his Hellstrikes... when the explosions clear, the Technodrome is still operational. 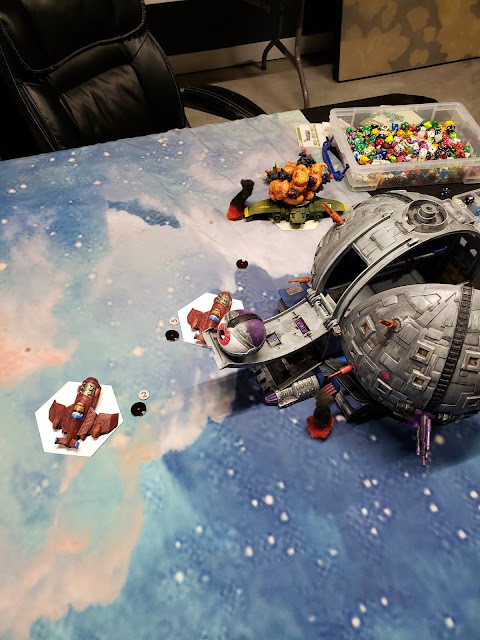 ...6 swings up orbit and maintains a line on the target, but just before he can get the pips aligned, the escorting Dakka Jets are able to converge and shoot him down.

Why is Krang back? What could be happening?


NEXT
We played a couple of wild and wooly games herding Dungers (and running down hapless Krologgs).  I will put this pic here as a teaser, leaving the batrep to one of my compatriots... 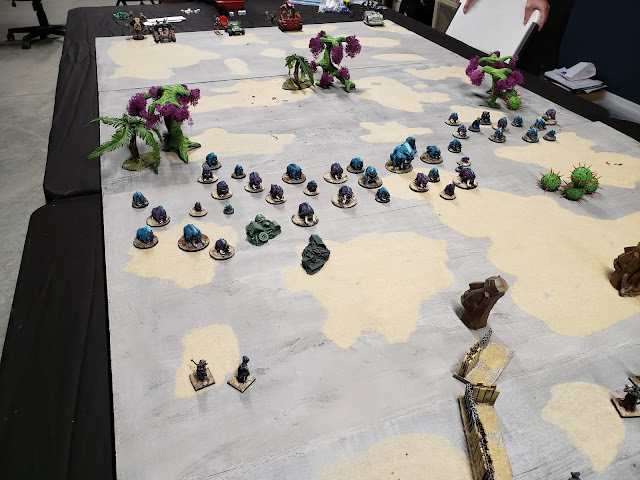 My last game of the weekend was an intro to Space Hulk. (All figures provided by airbornegrove26) I've never played before, but the game lived up to the quote, "...from about halfway through the game to the end, everyone is hyperventilating." 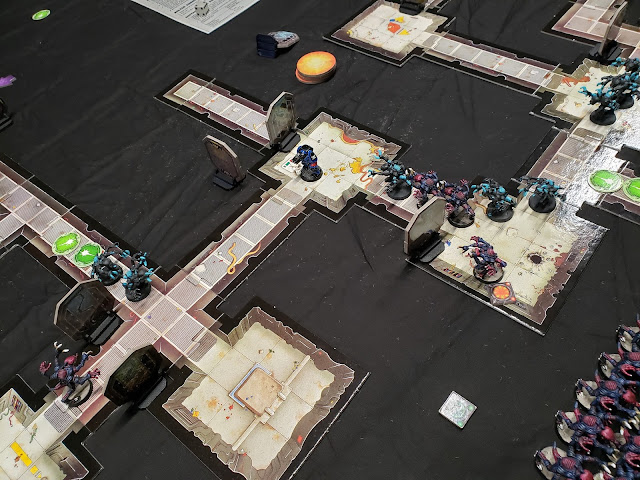 The boys continued the festivities for another day... 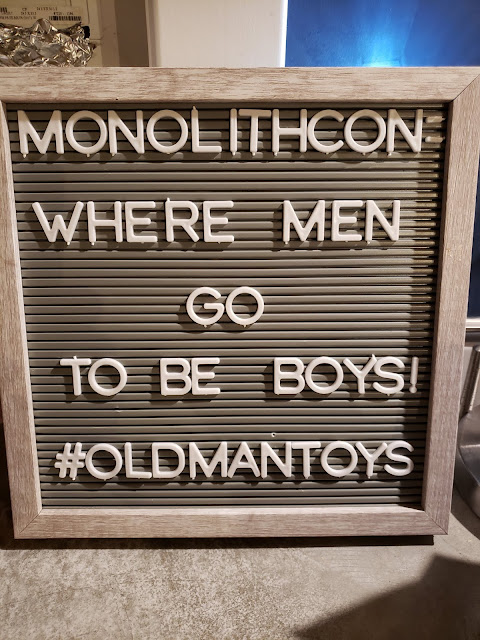 ...but I had obligations waiting, and a wife and kids I was missing, so I was up before the dawn and on my way back home. 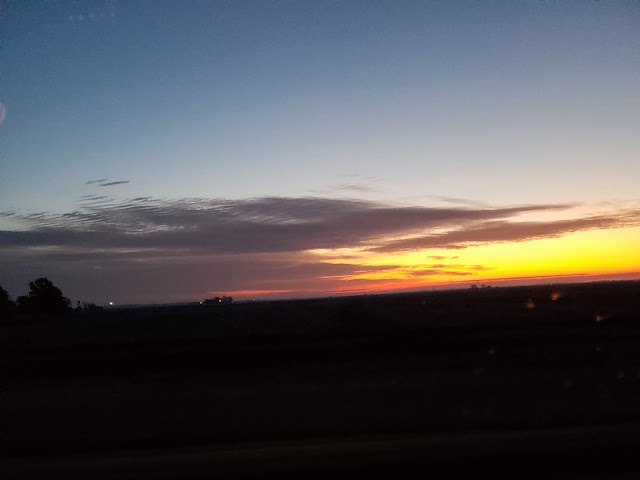