This will be the first "Large" battle of the campaign.  4th Reich Naval and Exo-Atmosphere units achieved dominance of the battlespace, and this begins the ground phase. I am playing the bad guys and my regular opponent, John gave me the choice of the type of ground assault I would like to initiate.
________________________________

Baroness Niehoff had control of the skies and her next decision was on how to proceed with the task of smashing the dirtside defenses of Nusling Inc.  Some of her Staff suggested a deliberate landing and buildup of forces before advancing on the lucrative research facilities.

The Baroness dismissed them as meek.  There was an immediate drop ordered just outside of the most upscale of the housing units. If "soft" assets could be apprehended and interrogated the Baroness surmised that the more important technical items could be pluundered more quickly.

Nazi raiders are always short of heavier units, but in this case they did manage to get a grenadier company and a panzer into the action. 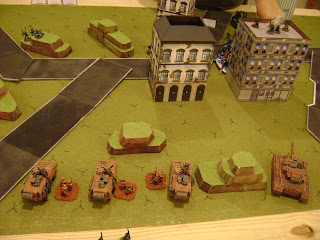 The Baroness herself would be dropped directly into the complex with a company of robots. 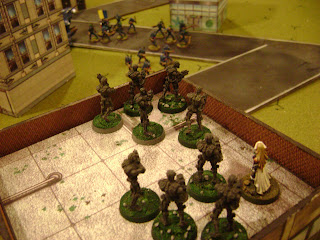 The defenders in this sector were a band of Rhodian mercenaries. They are well equipped with mobile units and had reached the complex almost at exactly the same time as the raiders. 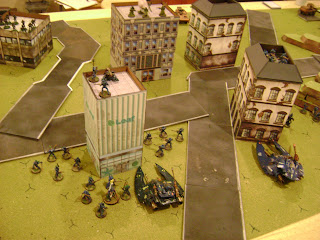 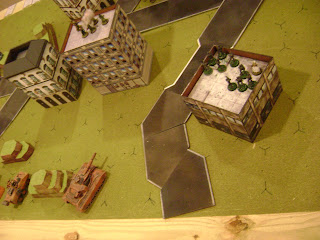 ...and dropped Fallschirmjägers to grab control of the center. 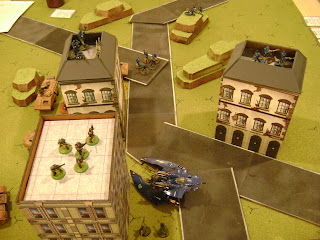 Undaunted, the Rhodians advanced into the other buildings.  The battle became a bloody urban brawl of close assaults.  After 2 turns of smashmouth combat the Nazis had been bled too severely to take complete control.

The Baroness ordered a withdrawal and moved south to await reinforcements from orbit.
The Nusling employees would pay. 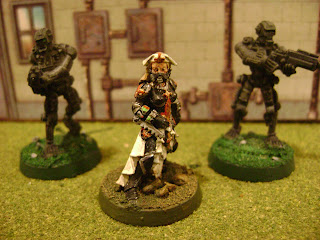