To Recap:
The 4th Reich is raiding an Imperial planet governed under a corporate license.  Ocrade (pronounced oa-kray-dee) is an earth-like planet in the NW region of Sector Six.  The license is held by "Nusling Interstellar Enterprises" and is sparsely settled but industry rich.  A perfect target for Nazi raiders.

The Raid on Ocrade would follow this pattern.
The first stage of the attack was against Ocrade's Deep Space Survey and Communications Station.  Led by Baroness Dagmara Niehoff and a contingent of the Terror Robots, the Nazi 22nd Exo-Atmosphäre Kommando stormed the small asteroid and took out the Corporate troops before an alam could be sent. 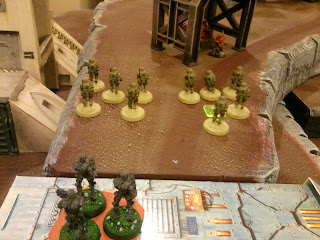 With the Station down, the 717th Raiding Sqn was able to catch the Imperial ships at anchor. 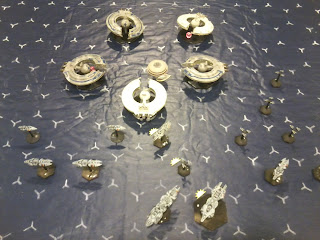 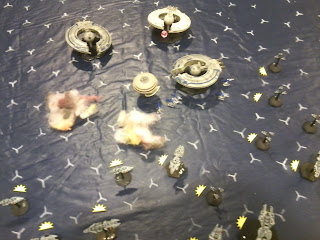 One Imperial ship managed to get clear of the station and jump away.

With the warning out, the clock is ticking on the Baroness and the troops of the 4th Reich!
Labels: Background Battles Ocrade Campaign