BACKGROUND
The Imperial subject world of Rilti has balked at paying unprecedented tax increases and military manpower confiscations, citing the need to keep their troops close to home.  An Imperial Space Marine Task Force was deployed to depose the government and restore Rilti to compliance

Although the initial Imperial offensive was stalled, the fighting skill of the Space Marine Task Force has been decisive and now they have broken through the Rilti defenses to the capital, Rilti Prime.

The most contested part of this campaign has been the sky.  A “volunteer” wing of mercenary pilots and their fighter aircraft (141st VFG) have battled in the skies against the Space Marine Stormhawks and achieved an unexpected amount of success, but never enough to reverse the Rilti failures on the ground.

After 6 weeks of fighting, the Space Marines stand just outside Rilti Prime for the final attack.

MISSION FIVE: Sweep the Skies
Before the ground attack begins, Ravenguard Librarian Bardalian details the remaining Stormhawks to sweep the skies of the enemy planes.  The Volunteer Group flying for Rilti are outnumbered, and fail to down any planes before withdrawing from the airspace in front of the capital.

MISSION SIX: Crushing Blow
SITUATION
On the enemy’s doorstep and having the advantage in airpower, Librarian Bardalian is still faced with the daunting task of assaulting an enemy in prepared fortifications.
It is time… 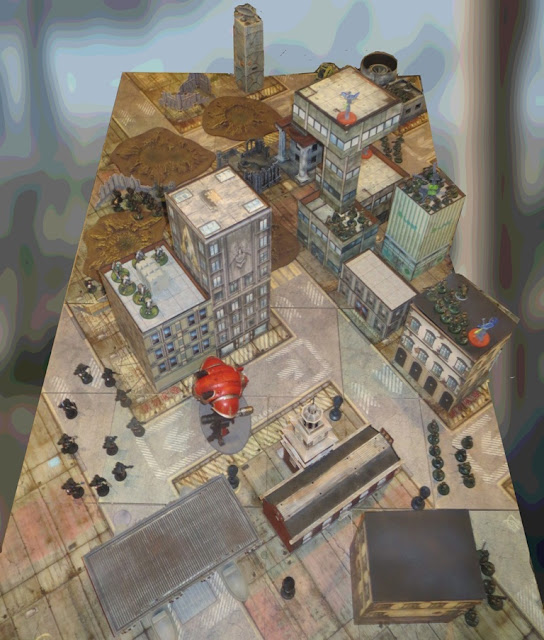 “Wun Wun” deploys on the Space Marine’s left, near the old quarter, where the more open pedestrian mall provides clear fields of fire for its massive weapons load. He is backed up by the jumpack Assault squad.  Librarian Bardalian, Terminators and the other 2 Tactical Squads deploy in the center across from the main objective in the Imperial Admin Building. 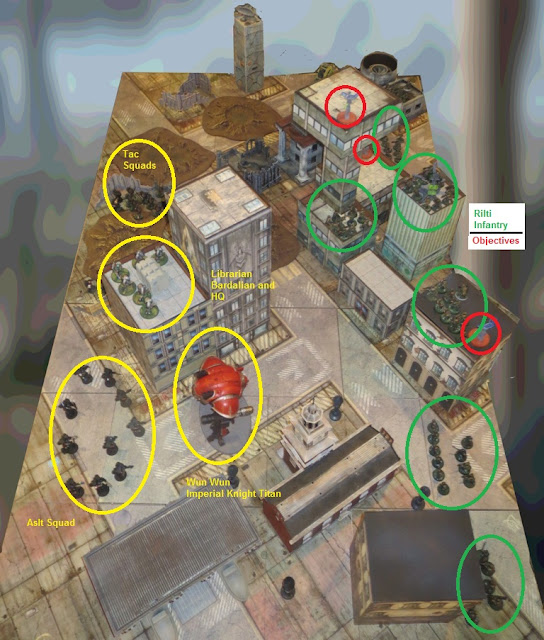 The Rilti defenders have no tanks left and deploy all infantry on the defense line. The casualties among Rilti Officers have been very high and the inexperience shows. Again, the Rilti troops are behind the key defense points and will have to redeploy forward to deny the Space Marines access to the city.

There are a few fighters left from the Volunteer Group to provide cover, but the Ravenguard will have the edge in the sky.

As the battle opens, the Ravenwing Librarian MOVES A BUILDING WITH HIS MIND, and brings the objective closer, keeping the marines from having to cover open ground. 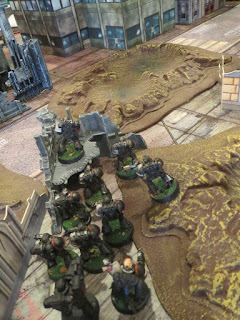 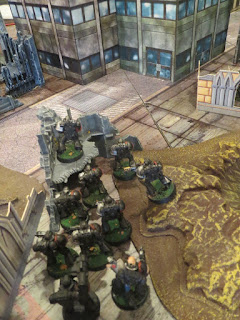 Needless to say, the Rilti Command is shaken by this raw display of psychic power.

The assault in the center is slowed through the ruins of the pre-attack bombardment, and just as the Ravenguard Tactical Squads are in the open, 2 fighters sweep in and gun down half of the Marines. 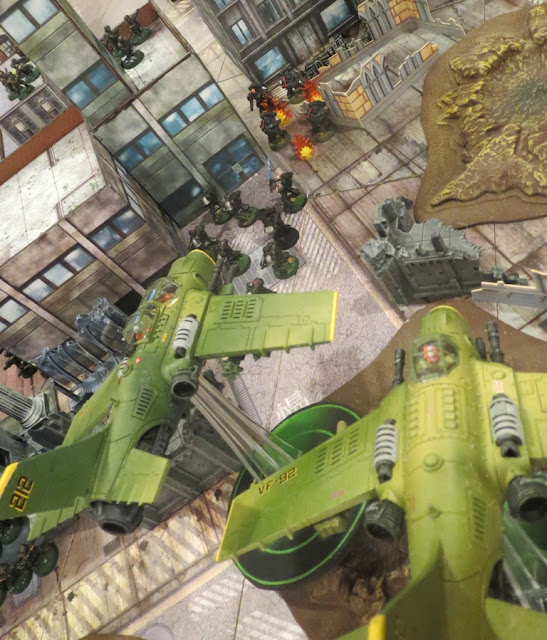 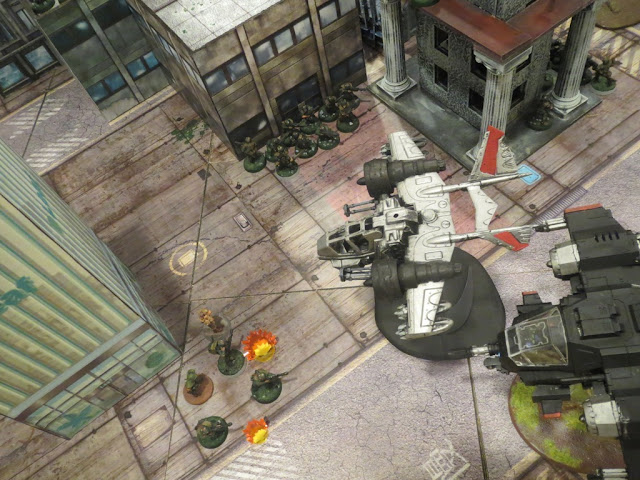 “Wun Wun” blasts through the Old Quarter and turns toward the center, while the Ravenguard Marines in the center slog their way forward through lasgun and plasma fire. 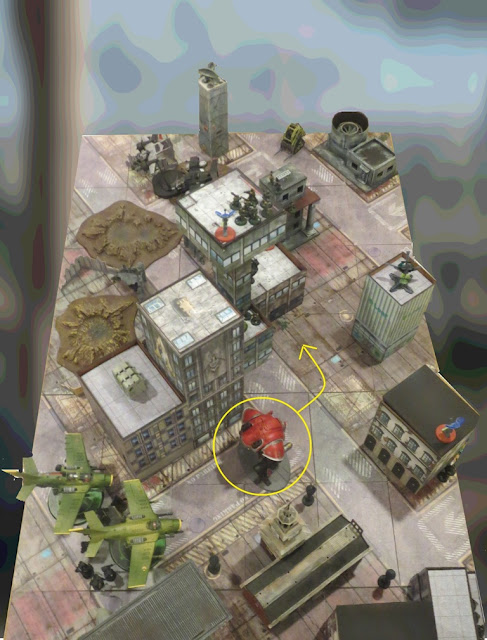 Both sides have taken incredible casualties, but no one is giving up this fight.  The crucial moment occurs when inexplicably, the Ravenguard Jump Assault Squad holds back, but the Imperial Knight charges forward unsupported.

As what happens over and over again with Armor in a dense urban environment with no infantry to cover the flanks, the Knight is swarmed from all sides and brought down. 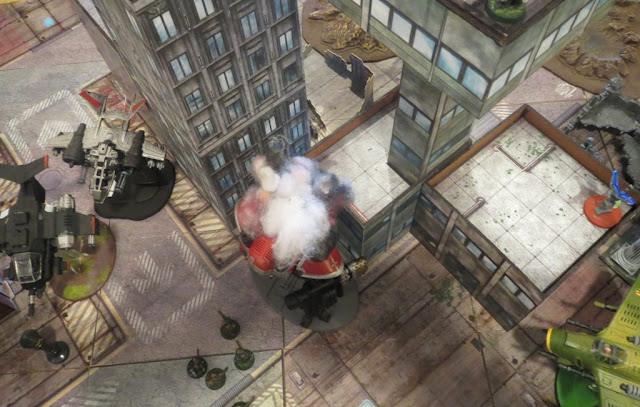 It is an incredible and unexpected victory for the Rilti PDF.
Librarian Burdalian is incredulous.  He has to be physically restrained by his own men and pulled back from this attack gone horribly wrong.

AFTERMATH
Resisting an Imperial Task Force on the doorstep of the capital is a doomed effort. Even the victory of the Rilti PDF is only a temporary respite, because there are no more reserves to continue the fight. Inexorably, the Space Marines will take the city block by block. Resistance is futile.

Terms are discussed with the Imperial Administrators in the fleet.  The current Rilti leaders will accept exile and forfeiture of all property.  A generous offer to traitors, and the Space Marine contingents are outraged.
However, needs must and  the Imperium is desperate for the resources of Rilit. Further fighting can only degrade the industrial output of this world.

The Rilti volunteer air group (The Kingdom of Colores 141st  Strike Fighter Wing) has been withdrawn from the planet.  Important lessons were bought in blood. Now with seasoned pilots, and experience against some of the toughest aircraft in Sector Six, the 141st will be ready for their next deployment.
___________________________________

So, The Air War Campaign from “Death From the Skies”

The Meh
The reason the Dogfighting phase doesn’t take too much time is that almost NOTHING ever happens.  Even if a dogfight takes place ( a 50/50 chance, unless BOTH players are willing), the worst outcome after all the charts is a single firing pass against a jinking opponent.  Not one plane was shot down in the Dogfight Phase during the 4 games where it was possible, and I think maybe 2 hits were scored. Our experience was that the phase was a big fat nothingburger.

The Ugly
Get to work right now on fixing Scenario 4 BEFORE you play it.  It can be the best, and I’ve gone on too long with my complaints, so just a warning it needs some gamer love to make it work.
Thanks for following along.

I just noticed a new follower, so a Big Welcome to Ikit Musker!
Labels: 40k Death from the Skies Battles The Rilti Intervention