Background
Red Scorpions Lord Commander Culln faces a mission that seems hopeless.  Reinforcements are desperately needed in the Ultio system to stop the Chaos machinations.  Here, in Sector Six, there are almost enough troops to at least give the civilized universe a fighting chance, but this Sector is violently divided. 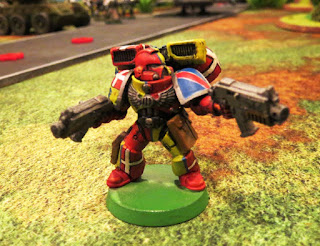 For Culln, it is unknown whether the local Imperial authorities will aid or oppose his mission.  Rather than landing on Sector Six Prime, he arranges to meet clandestinely on Rilti Prime with Captain Blackwood and a small force of Salamanders Space Marines to discuss the situation.

SITREP
Librarian Balderius of the Grey Knights was on edge.  The fighting on Rilti had just ended weeks before, and now an unknown starship was attempting to land undetected.
Luckily, the Imperial Knight Wun Wun was near the landing site.  A quick call to the ready force, and Balderius was on his way. 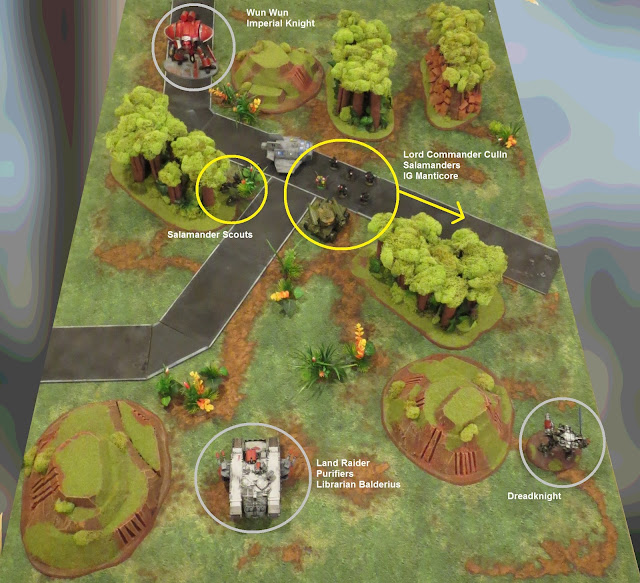 Culln and Blackwood were taken by surprise by the eruption of gunfire. As the explosive rounds impacted all around, the Salamanders' Captain began calling into his comms for information.  It became clear that this was a colossal mistake.

There was no time to try and talk the Grey Knights down.  Escape first, then contact the attacking Grey Knights. Blackwood issues the order to break east 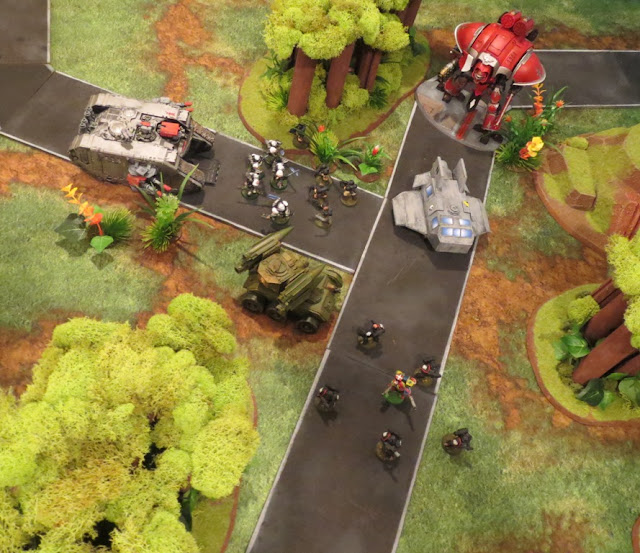 Librarian Balderius ordered his forces forward.  Wun Wun would be the beater, driving the intruders east, toward the Dreadknight.

The Salamanders have a Manticore attached from the Imperial Guard, and it repeatedly fires at Wun Wun all the way in. 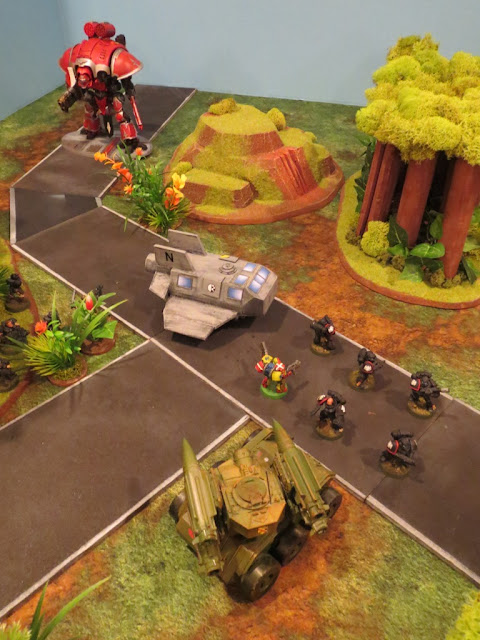 The Salamander scouts break cover and intercept the Grey Knight Purifiers to slow them down. 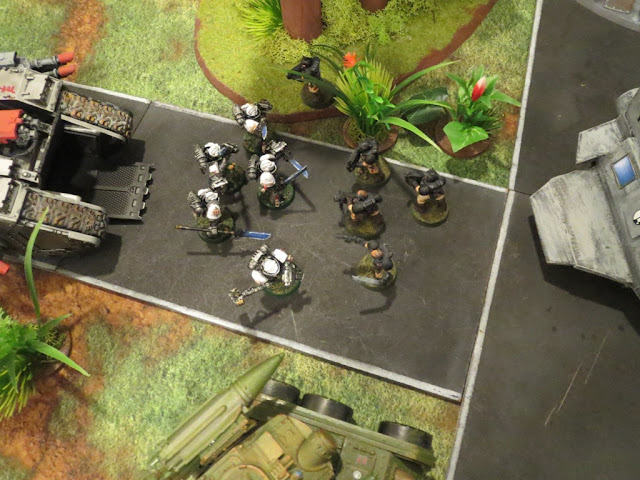 The Salamanders' have air support in the form of a Storm Talon, and combined with relentless volleys from the Manticore, Wun Wun is disabled. 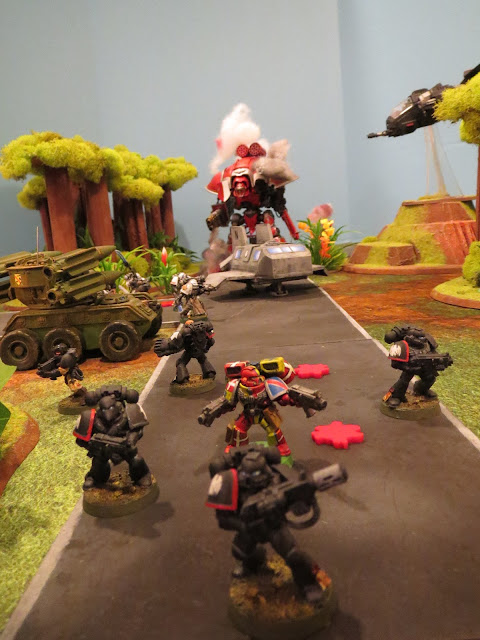 ...Blackwood and Culln make their break.

Unfortunately, they failed to see the Dreadknight. 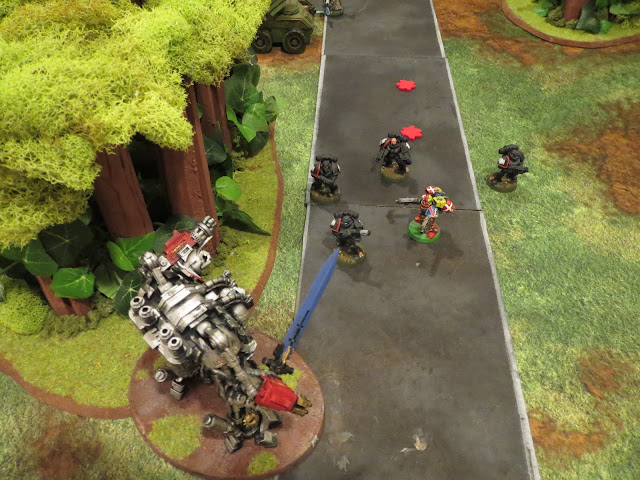 Suddenly, the massive war machine hesitates, as if there was a flash of recognition by the pilot, and Culln and the Salamanders slip the net.  Wun Wun was severely damaged by fire and the Dreadknight was swarmed by Salamander reinforcements before he could pursue.

Epilogue
Librarian Balderius heard his headset crackle with new signals.
“Cease Fire, Cease Fire! Balderius!
This is Blackwood, we are shooting each other”

What was Blackwood doing out here?   …and who was on that ship? 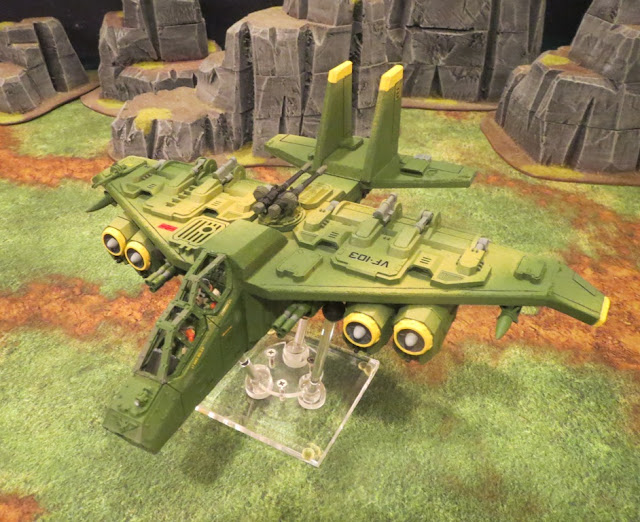 Thanks to the Narrative Guys for giving us a scenario to play.  We had four games with guys at the club playing the scenario and all of them went down to the wire.  As a note to the game above, the Grey Knights player had the game in the bag and he FORGOT to assault with his Dreadknight.  Yes, the key move of the game, that he totally set up...
and he....
FORGOT....
Outstanding.

Lastly, I know I should have waited to reveal my scratchbuilt Marauder Destroyer in it's own post, but I couldn't wait. Consider this a sneak peek. :)
Labels: Battles Ultio Expedition