On the Hunt VIII: Second Battle of Savo Terminus

SITREP
The fighting on the surface of Haussen is ferocious. The Reich troops are contesting the main LZ of the Alliance and that battle could determine the outcome of the campaign.  To change the balance, on the evening of 27Dec2013 a powerful force of the LuftKrieg attempts to force passage of the Slot and retake control of the sky..

Both combatants are down to their last reserves.  The fighter forces are so depleted neither force includes embarked fighter wings in strike quantity.

The LuftKrieg jumps in close but slightly off target.  Instead of heading right into the slot, the formation is slightly "high".  The Alliance blocking division is crossing the terminus in a single line for optimal sensor coverage. 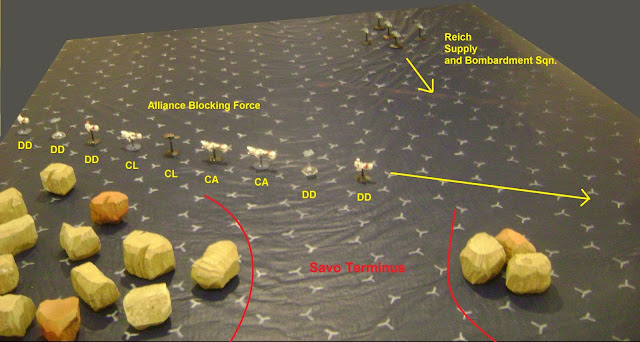 The Alliance splits into 3 divisions.  The DD's on the high side max burn to extend and turn away from the terminus.  The Cruisers continue on course to physically block the terminus, and the trailing DD's bank hard to the low side.  In response, the Reich Cruisers turn low to align with the slot and the DD's maneuver aggressively against the high Alliance DD's. 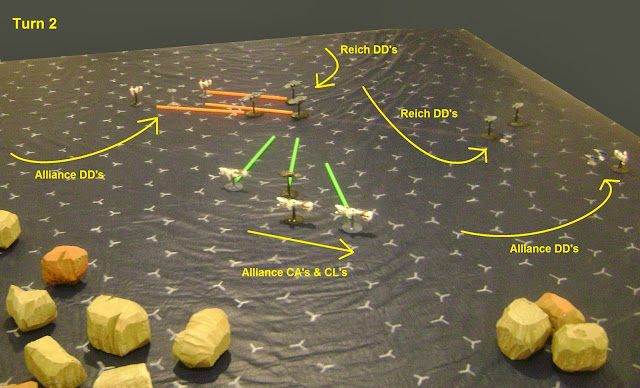 The result is devastating for the Alliance DD's.  On the low side, they fly into gun range of the Reich battle line.  On the high side, the Reich DD's get better missile shots.  Of the 5 Alliance DD's, all are removed from the battle. Both Timtai ships are destroyed and all 3 Colores DD's are forced to attempt a jump to get clear. In exchange, 1 LuftKrieg DD is destroyed.

In the next sequence, the Reich CA's veer below the terminus to stay out of range of the Alliance CL missiles.  However, the Alliance guns lash the Reich ships. 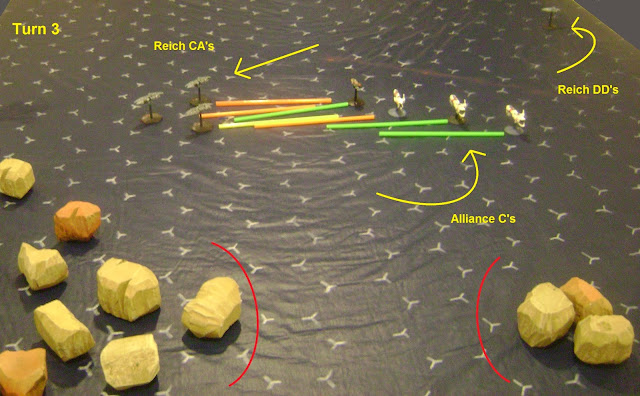 The Reich loses a Cruiser, but the Alliance Hatirki CL is destroyed and the Colores CL jumps away.

Falling below 50% strength, the Alliance captains might withdraw, but the Commodore aboard the St. Marie orders them to hold. The last Reich DD tries to pass behind the 2 Alliance cruisers but ends up right into their firing arcs.  The Reich CA's fire onto the St. Marie at long range. 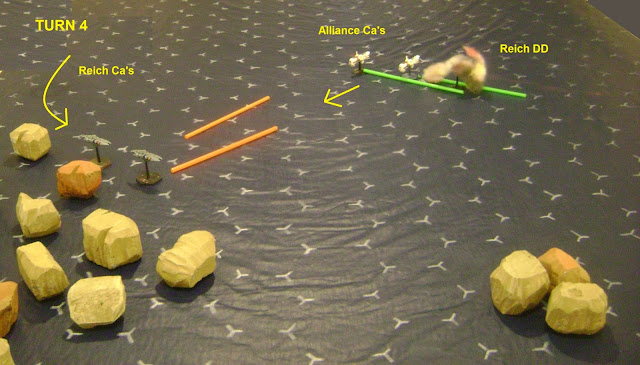 Both sides are now below 50%, and both hold. No one is quitting this fight.  The Reich cruisers work to the Terminus and the Alliance ships maneuver to optimum range. The Reich loses a ship while the St. Marie is  left drifting without power and burning in several compartments.

The Austria, the single surviving Reich ship, escapes into the slot. The Dominican comes alongside the Flag to render aid. 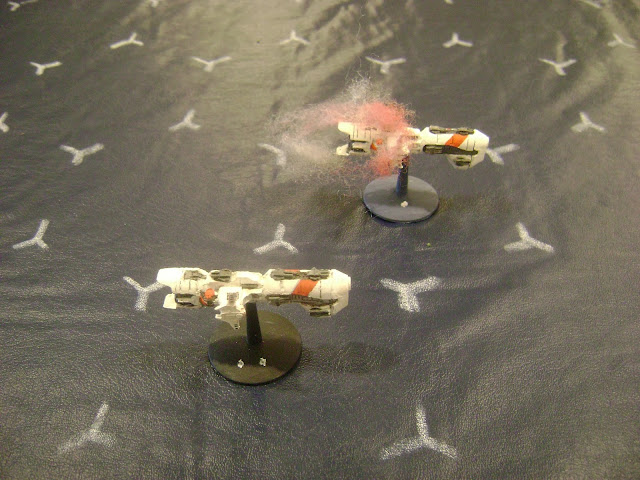 AFTERMATH
The Austria will continue on her mission, and the Alliance support fleet will withdraw into the belt, but the single ship can only achieve a stalemate. The immediate situation on the surface of Haussen will be decided by the forces already on the surface.

Of more importance to the campaign overall, the 3 ships destroyed in the engagement are from allies and not from the Colores fleet. This casualty imbalance also happened in the first battle of Savo. Is there something about the Colores conduct of  sky operations that spares Colores ships but causes excessive casualties to the allies? Dissatisfaction has reached the point that a strategy review council will be convened.