Background
The Imperial forces in Sector Six are at the point of crisis.  The emergency recall of major combat units to Imperial Prime, on top of the war in the Rentlaw Sub-Sector, have been pushed the remaining Imperials  almost beyond their limits.  It has become necessary to impose emergency measures and demand greater taxes, material, and men from Imperial subject worlds. The world of Rilti has balked at these unprecedented increases, citing the need to keep their troops close to home.

There can be no negotiations with the will of the Emperor, only obedience. A Space Marine Task Force has been dispatched to seize control of the planet.

When the task force arrived, Ravenguard pilots seized control of airspace over the landing zone, decimating the pilots of the Rilti Planetary Defense Force.

However, hope is not lost. The Kingdom of Colores 141st Strike Fighter Wing has been deployed to help the citizens of Rilit.  Acting much like the AVG in China during WWII, these future “Flying Tigers” might just be able to stem the Imperial tide.

Situation
The Ravenguard, utilizing a combined arms force, will try to punch a hole through the extensive Rilti Forward Defense line.

The Defense Line consists of 5 fortified buildings.  The Rilti PDF must hold the line and prevent the fortifications from being destroyed. The Ravenguard  mission is to destroy the fortifications and clear the road for the rest of the Imperial Task Force to advance.

The Ravenguard jump off their assault and begin firing at the defense installations, Col. Edespar in the Rilti Command HQ calls in the fighters of the 141st. 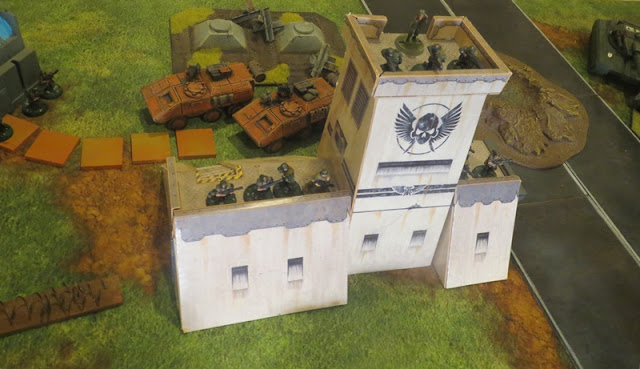 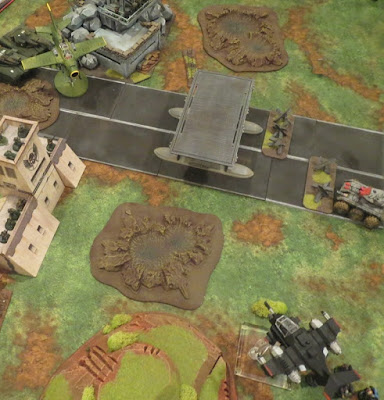 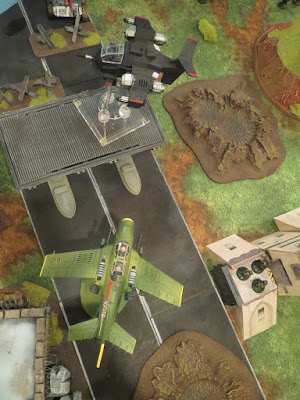 It seems as if the Stormhawk gets the advantage, but at the last second, the Bulldog turns the tables… and scores a hit .

Damaged but still in the fight, the Stormhawk rolls away. 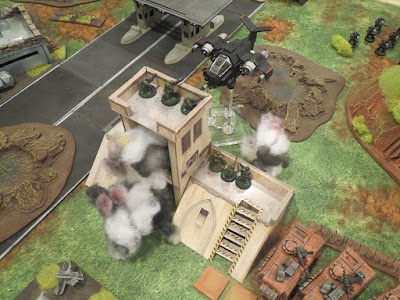 The Stormhawk counterattacks with a ground strike, and in one devastating volley, punches a hole in the HQ Bunker, killing Col. Edespar and the Rilti Command team instantly. 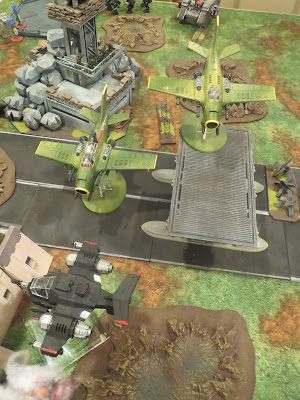 The Bulldogs sweep in and try to exact revenge, but fail to penetrate the armor of the more advanced Imperial fighter. 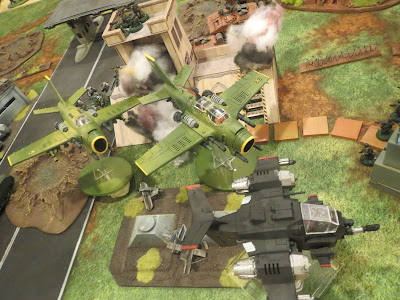 Making a hard turn, the Stormhawk attacks a second fortification. The Bulldogs pursue, straining to match every maneuver turn for turn.


Yet again, the Bulldogs fail to score damage against the Space Marine Fighter. 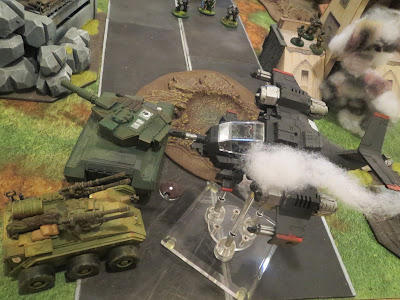 Finally, the nimble interceptor executes a wingover the Bulldogs cannot follow and they break away high.


With his air support destroyed, Ravenguard Captain Galeus can only watch as the Bulldogs return and unleash their Hellstrike missiles on his attacking troops…. 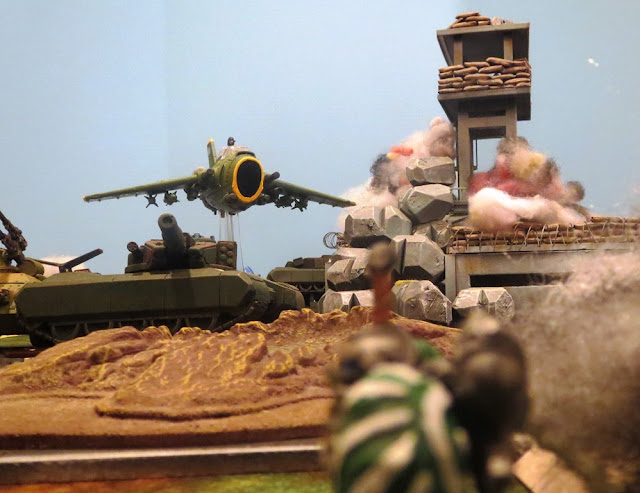 Aftermath
The Imperial attack was blunted, but the Defense Line has sustained too much damage to repel the next attack from this position. The Rilti PDF fall back to the next line.

Captain Galeus is taking this tactical draw personally, and after a short pause to regroup, the marines will be ready to renew the attack in a “Lightning Assault”.

Over the next few weeks, Robert and I will be playing through the Air War Campaign from the “Death from the Skies” (DftK) book. We played Mission 1 previously (not recorded on the blog), with the victory going to his Ravenguard / Grey Knights task force.

This was Mission 2: Tactical Strike.  I have to say, looking through these Scenarios, the material / terrain expectation is very high, and seems beyond the reach of most players.  This mission required FIVE bunkers.  There is another mission later on that the attacker needs FIVE transport aircraft. Seriously?!!??
Talk about “barrier to entry”!

Some observations from gameplay of Mission 2…
Playing the game was very fun. On turn one, my opponent wanted to dogfight (and knowing I was seriously outclassed)  I did not. I won the dice off, so no dogfight.  On turn 2, he won the roll, so we ran it. This was the only dogfight of the game, and I pulled off the upset and actually scored a hit.

As the Imperial Guard only gets one lousy Flyer in the book, I am forced to have my beautiful F/A86 Bulldogs “count as” Valkyries.  Good grief! That was torture!
Completely undergunned, they shot everything they had, every turn, at the lone Stormhawk and (except for scoring a hull point in the Turn 2 dogfight) only really managed to keep it jinking and  firing snap shots.

When I made the comparison to the WWII Flying Tigers, I didn’t realize I would also be simulating how outclassed their equipment was!

Anyone have any stats for the Thunderbolt in the new rules? Unofficial is fine with me.
Anything???
Anything???
Is this radio on????

About the frequently voiced concern that the new rules would slow the game down….
Even though I only gave commentary on the Air Battle, this was a full 40k game. (Ending with a nailbiting DRAW)
After using the air rules, I think most games will only have one or two dogfights.  If one player doesn’t want to dogfight, 50/50 it doesn’t happen. After the early turns, all the flyers are on the table, so dogfights don’t happen then either.

On a visual note, the rules state that for a dogfight, players should put the flyers on another table. There is no need for this.  All you are tracking is distance and facing. Use the main table for dogfights. It looks wayyyy cooler.

On to Mission 3: Lightning Assault!
Labels: 40k Death from the Skies Battles The Rilti Intervention