BACKGROUND
The Imperial subject world of Rilti has balked at paying unprecedented tax increases and military manpower confiscations, citing the need to keep their troops close to home.  The Imperial Government has responded with an invasion by a Space Marine Task Force.

After the initial attack was stalled, several units of Space Marines deployed behind enemy lines to secure vital choke points are now isolated and running low on supplies.

Imperial HQ has decided on a massive airdrop to resupply these units.  All of the remaining airpower will be concentrated to ensure the success of this mission.

SITUATION
Gamma Battle Company of the Grey Knights have been fighting behind the Rilti defense line for 5 days. They are desperately low on ammunition, surrounded, and have taken heavy casualties.  Imperial Command has marshalled several units of supply transports and concentrated the Stormhawks of the Ravenguard for a massive airdrop.

If the Imperials can break through the Rilti air cover and hold off the assaulting enemy troops, they can regain the initiative and continue their march on the capital. 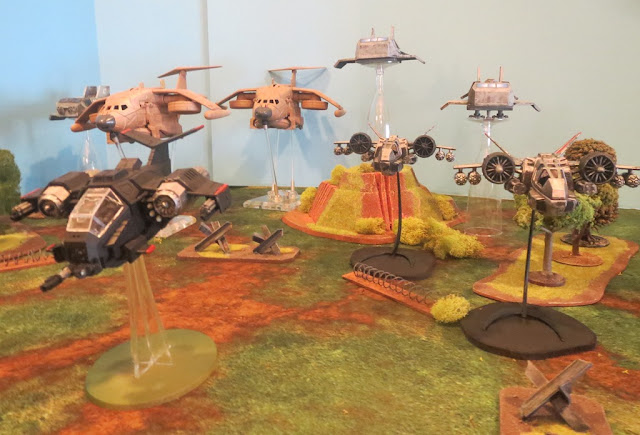 The massive airlift descends to low level as they approach the target. 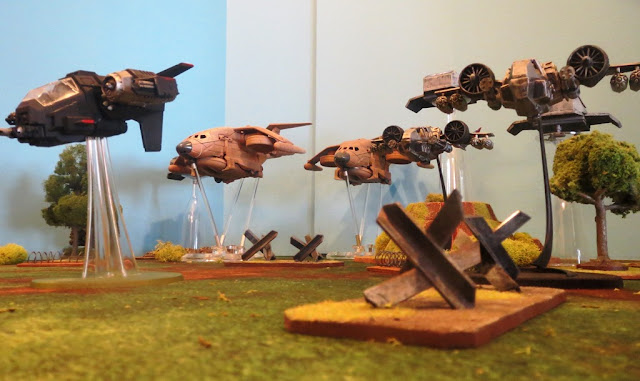 While Battle Company Gamma hunkers down in their perimeter 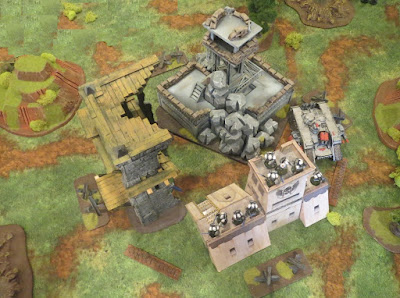 With the concentration of fighters, the Imperials, for once, control the skies, and the planes of the 141st VFG are cleared from the battlespace. 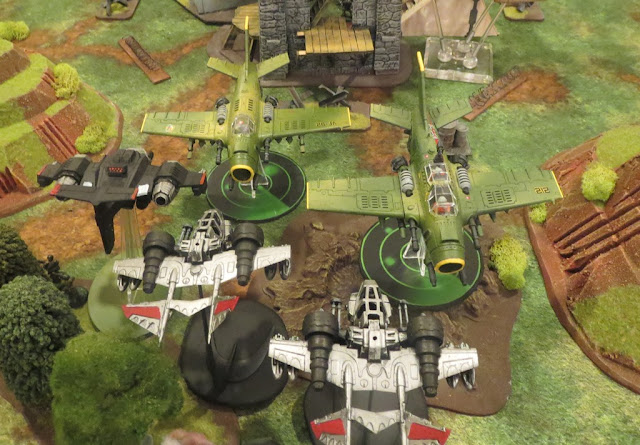 Heroic transport pilots of the Imperial Navy drop their supplies right on target while dodging through the buildings. 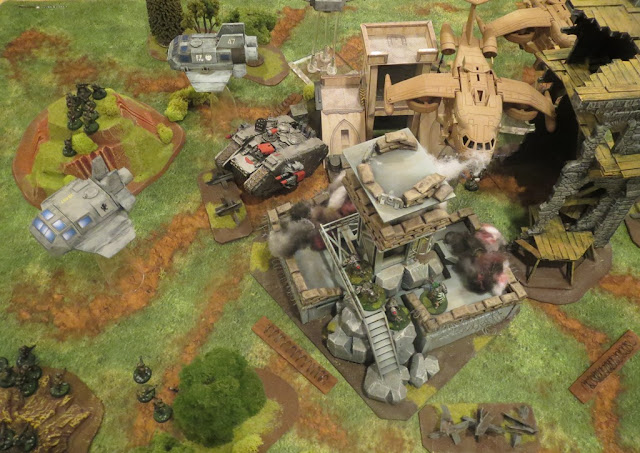 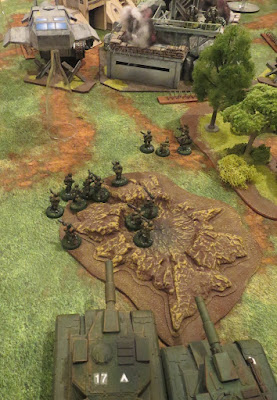 AFTERMATH
The air resupply was a complete success and the Imperial advance on Rilti Capital Prime will resume from this point behind the main Rilti defenses. The Rilti PDF will have to scramble to be in position to save the capital.

The 141st VFG take to the skies to avenge their losses at the hands of the Ravenguard and slow the Imperial advance!
Ok, need to start with:
This mission had the potential to be the coolest mission in the entire book, BUT…
No way around it.  Poor writing and execution by Games Workshop ruined it.  Honestly, with the concept of landing supplies to a beleaguered and surrounded command, you have to work hard at messing the design up….
…and Games Workshop did.

For how the game went and how we played it:
I want to make sure my grumbling does not take away from my Opponent’s victory. He played a well thought out game, and stuck to his plan.  His victory was earned.  It is a shame it is attached to this craptactular atrocity of a scenario.)

Again, Attack Patterns are devastating:
I took 2 Thunderbolts/Bulldogs, my opponent took 3 Stormhawks. I entered the board second, so I got the jump on his flyers. I only scored 1 hull point against his lead Stormhawk.  In reply, his 3 Stormhawks turned and adopted the perfect air to air attack pattern.
It takes away jink saves!!! If I had managed to down the lead Stormhawk, he could not have adopted this pattern, but with 3 fighters, this was a killer.

He shredded my poor Bulldogs in one firing pass.
So, to all my fellow Wing Commanders, I cannot stress this more strongly. Attack Patterns are everything!

On to the problems with scenario design and ambiguous rules writing!

Biggest Issue:
5 free transports…
What kind of transports?  The scenario does not say.

Possibility One: Stat-less flying pieces of terrain
Meaning, they cannot be shot down, they are just a scenic delivery system for the objectives, and disappear once the objective is dropped.

Problems,
-          If the transports have no stats and cannot be shot down, then why would the owning player ever deviate from the optimal flight path?
-          Since there are no rules about a minimum distance between objectives, wouldn’t the player just place all 5 objectives on the optimal spot and roll scatter?
-          The scenario rules specifically state that the objective must be dropped on the first turn the transport is on the table.  That seems to me to mean that the transport will continue to be on the table for turns after the drop. i.e. a real flyer with stats and abilities.
-          Why would you really need the models?
-          They are listed as “5 free transports”.  Do they count toward the air superiority rule? So the Invader STARTS with a FIVE flyer advantage in reserve that the Warden has no ability to affect?

Possibility 2: The transports are selected from possible transports in the book
So, actual flyers with stat lines

Problems:
-          Do they count toward the air superiority rule? For this possibility, absolutely.
-          If I shoot a transport down in a dogfight does the objective never appear? (and though common sense would say the warden should get Victory Points for that, the scenario doesn’t) So the perverse incentive is to let the transports come. WTF is that?????
-          The five Space Marine Transports are Stormravens, and they are equipped  with ALL kinds of weapons.
….for free. Holy crap
-          Since the FIVE FREE Stormravens all use the same datafax, they can be in attack patterns.  As in the 3 and 4 flyer patterns with the best bonuses.
-        Not every faction has a flying transport. How do you run this mission for them?

We ran this scenario with Stormravens as the transports.  What a massacre.
I suggest the following adjustments:

1.       Transports are GENERIC and have the following stats:
10/10/10, 3 Hull Points, Bomber, Agility 1, Pursuit 1, a 360’ Twin Linked Hvy Bolter (or other defensive weapon appropriate to the faction). Attack formations should be legal for the transports

2.       POSSIBLE OPTION: If the transport wants to wait until the second turn on the table to drop the supplies, it can do so with only 1d6 scatter. (Just a thought, but sounds cool)

3.       Any Transport shot down by a dogfight in reserve gives the Warden 2 VP’s

See Games Workshop, was that so hard?

Labels: 40k Death from the Skies Battles The Rilti Intervention