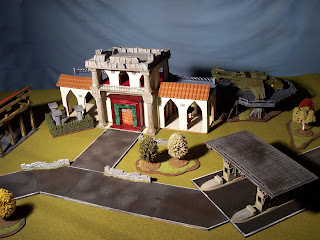 Due to recent economic growth and military success, the long planned relocation of the Governor General and his wife and family is finally underway.  Pictured above is the old residence on Hearthstone Colony.  The new residence is located on the besieged colony of New Cypress.  According to the GovGen's Public Affairs Office the move is being made for two reasons:
1. It will reinforce the public's perception that the GovGen's objective to relieve the siege of New Cypress is very close to completion.
2. New Cypress is more centrally located in the Earthling colonies of the Kingdom of Colores enabling better command of the active military operations against any continuing threats.

Off the record, sources close to the Governor General's Wife told this news agency that it was all about New Cypress' very close proximity to the Waller Market Nexus.