The Defense of Rosenberg

The contacts were intercepted and brought to battle at 1700 at the Rosenberg #3 Powerplant.  The terrain was generally open with a few wooded areas from the direction of attack.  Recon from the fleet identified transport ships in the system, and the good news was that the enemy was known to us. The bad news was that the enemy was from the Steiner Enclave. The Steiner Enclave is one of the larger political entities that claims territory in Sector Six, it is solidly within the Imperial sphere of influence, and it includes a large number of descendants of the Nazi refugees that fled western forces into this part of the galaxy.  Their hostility added to the equipment and training the Steiner military could bring to bear would make for a very tough combat.

There would be no orbital support as the Reaction Task Force ships would be chasing the Steiner naval units around the system. As soon as the landers hit the field, units were rushed from Rosenberg's primitive landing field to the combat area. 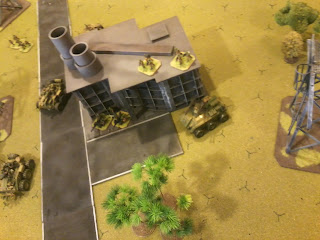 The main defense positions were anchored by a heavy weapons placed in the power plant itself. 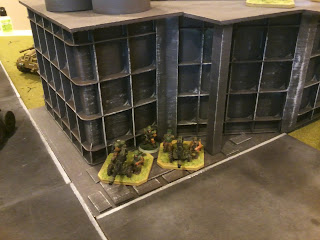 Infantry deployed to cover on the flanks. 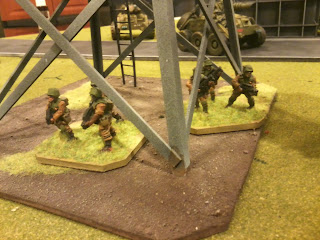 The Steiner force opened with tanks on the left, supporting the main attack... 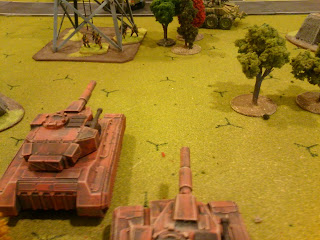 ...from a company of infantry on the right.  The Steiner assault force was hammered by the heavy weapons battery and the AA unit as they closed the distance. 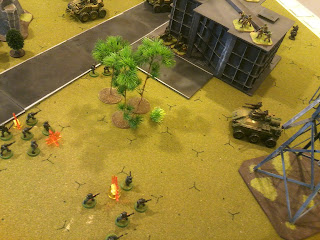 As the frontal attack faltered, a unit of commandos was dropped in behind the plant and attacked from the rear.  Overall, the hasty defense was too much for the Steiners to overcome. 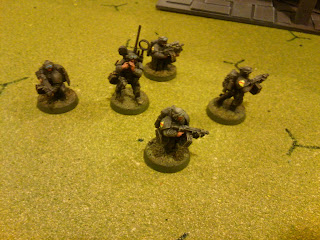 A small remnant of the Assault company actually reached the building before going down in a hail of fire. 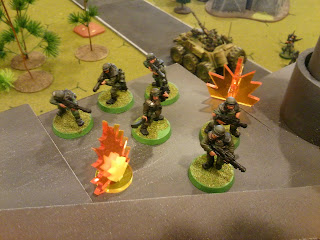 Prisoners from the action possessed no knowledge of any larger plans or mobilization for war by the Steiner Enclave.  Currently, Kingdom forces are in pursuit of the remaining Stieners, but there is little hope of catching them.  Their units typically have faster mobility and past encounters have yielded little results beyond the immediate success of battle.

There will be no rest for the Kingdom's Task Force, as there have already been new developments in the siege of New Cypress, and  apparently the long awaited reinforcements of Aerospace fighter craft are inbound.

"Opportunities await Pvt Jackson! Get the troops re-embarked!"
"Yes, Sir"
"...and do not forget to load the purchases for my wife!"
"Ummm...well, the rush, the battle.."
"Good God Man! Get your priorities straight. Saving the colony was good and all, but unless those packages reach the manor we're done for!"