This Friday saw the release of THW "Star Navy".  I bought and read the rules on Friday night, had a question or two, but I got an answer very quickly Saturday morning from both Desert Scribe of Super Galactic Dreadnought and Ed from THW  and away I went...

I only used one house rule.  I am a "hex" guy, so I pulled out the Battleship map as you can see below.  1 hex= 1"
_______________________________________________________________________________
The Star Navy of the Kingdom of Colores (KC) has really been considered a joke up to this point in the timeline.  When first established in 1951, KC did not have a single ship that could be considered military. The various colonies of the KC contracted with  free company ships for troop movements and cover for any actual combat actions.  The next stage of development was lease and/or purchase of ships flagged as their own.  These original ships were worn out, obsolete, cast-offs that were barely space worthy.  Plus, they needed large numbers of alien contract personnel to even navigate out of port.  The appearance of any real warship sent the Royal Squadrons fleeing.

Finally, after decades of development, the Colores ships feel ready to contest the skies.

Imperial ships have long flouted KC local space during transit by jumping in and making a dry pass at the closest ship or installation, then jumping out, mocking the very idea of sovereignty.  Imperial Captains consider it a kind of sport. It serves as a warning and as intimidation to the smaller states in Sector Six.

Today would be different. 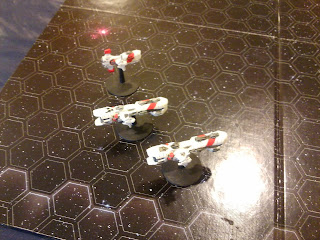 The 14th KC Squadron consisting of 2 Heavy Cruisers and a Destroyer are patrolling the edge of KC territorial space when they ping a new contact. 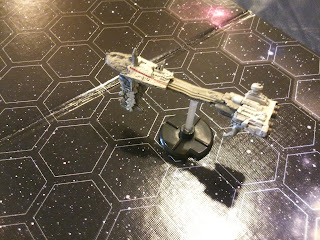 An Imperial Heavy Cruiser has jumped in. She immediately begins a hard burn straight for the patrol. 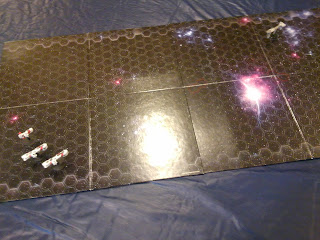 The Imperial ship as usual ignored all warnings. In the past, Colores ships kept their weapons powered down during these dry attack runs.  They had no choice, Imperial naval units were so far advanced that active resistance would achieve nothing except their destruction.  This time however, the guns were powered up. 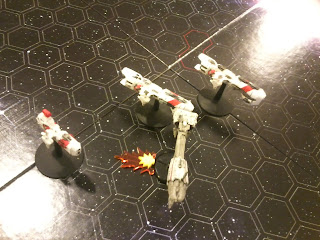 As they close on the firing run, the Colores destroyer strikes with a missile hit, and the Imperial Cruiser veers off... 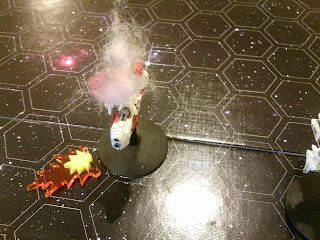 ...then strikes back with a full broadside.  Streaming atmosphere and with several systems down, the Destroyer's Captain decides not to push his luck, gives the order to jump, and is gone from the fight. 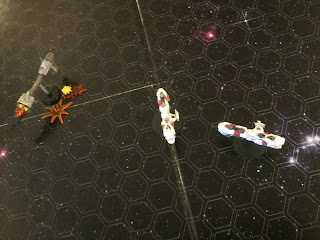 But the destroyer's contribution is significant.  The Imperial Cruiser lost some shield capability and the volleys from the KC ships get through. 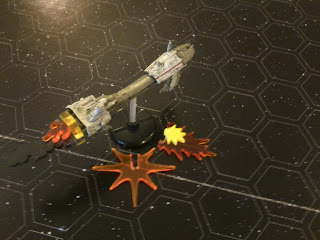 "Jump!" and the Imperial Cruiser is gone from KC space, heavily damaged and with many crew casualties.  She survived the jump, but will be out of action for at least 2 months.

I used all the charts and mechanics for setting up, fighting, and for "after the battle".  I found the rules to be clear, quick, and nicely narrative oriented.

I am not without reservations about these rules, but I don't think it would be fair to comment until I am more familiar with them.  I will say that this is a very different approach than I have seen before, and that reinforces my view that I need to play more. My first impression was that it was easy and fun, and we will see about the rest.